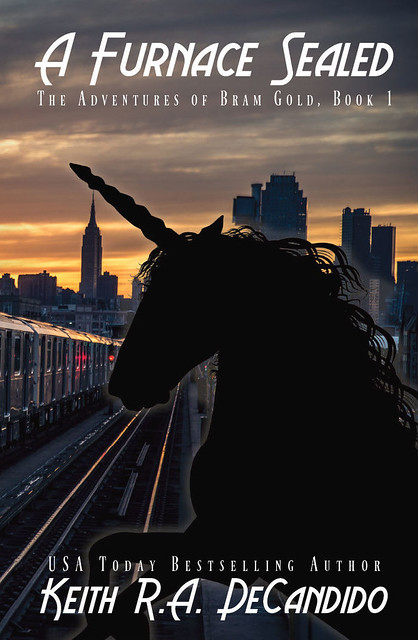 In today’s Big Idea, Keith R.A. DeCandido is here to represent for The Bronx, and why it’s a fantastic setting for his new urban fantasy novel, A Furnace Sealed.

Finding an urban fantasy novel that takes place within the confines of New York City is about as difficult, to quote that great philosopher Edmund Blackadder, as putting on a hat. Just in general, the Big Apple is a very popular setting for fiction, not just of the urban fantasy variety.

In other words, they think of Manhattan south of 125th Street. To most folks, that’s what New York City is. Maybe, maybe they might throw Brooklyn in there.

A Furnace Sealed is my attempt to remind folks that there’s a lot more to the Big Apple than that. The city has five boroughs. There’s also Queens to the east and Staten Island to the south. There’s Inwood and Washington Heights, the northern tip of Manhattan that is often forgotten.

And there’s the Bronx, my home borough, the northernmost portion, the home of the Bronx Zoo and the New York Yankees, the only part of the city connected to the mainland.

The Bronx has a long and fascinating history. It also has an image problem, as the only image most folks can conjure is the South Bronx forty years ago. Fort Apache, the Bronx was released in 1981, Howard Cosell famously said, “Ladies and gentlemen, the Bronx is burning” during the World Series in 1977, and all too often when I tell people I live in the Bronx, they think it’s still like that. “Do you carry a knife?” (I used to carry a Swiss Army Knife, but post-2001 airport security has gotten me out of that habit.) “Is it safe where you live?” (Very.) “Are you the only white people?” (No, and also, even if we were, so the hell what?)

But the Bronx has Little Italy (the real one, not the tourist trap in lower Manhattan), the aforementioned Bronx Zoo, City Island (a New England-style fishing village off the east coast of the borough full of great seafood and adorable crafts stores), several huge parks, the New York Botanical Gardens, Woodlawn Cemetery (where many famous personages from Elizabeth Cady Stanton to Miles Davis to Fiorello LaGuardia are buried), the Bronx Museum of the Arts, several great universities (Fordham University, Manhattan College, Mt. St. Vincent, etc.), and very soon an independent bookstore, the Lit. Bar. It’s where Edgar Allan Poe spent the last years of his life and where break-dancing and hip-hop were born. Alan Alda, Justice Sonia Sotomayor, Rep. Alexandria Ocasio-Cortez, and Neil deGrasse Tyson are all from the Bronx. And there’s so much more besides.

It’s because most of you reading this probably didn’t know most of what I just wrote about that I conceived The Bram Gold Adventures, of which the first book is A Furnace Sealed. Bram Gold is a Courser, a supernatural hunter-for-hire. He’s the guy you hire to wrangle a unicorn or babysit werewolves on the night of the full moon or get that pesky leprechaun off your lawn. And he works and lives in the Bronx. The first story I wrote with him appeared in the 2011 anthology Liar Liar, which had some fun with the history of the Marble Hill neighborhood, which used to be a physical part of Manhattan, then an island, and now is physically part of the Bronx (though politically still part of Manhttan).

The theme of the urban fantasy world I’ve created is that most of the creatures are not quite what you expect—much like the borough where the book takes place. Unicorns are, in fact, surly beasts any time they smell a male (which is why virgins can calm them—they don’t have man-funk on them). Vampires are total wusses who are pale and sickly and don’t like sunlight. Werewolves are mostly just people who turn into big dogs once a month.

And Coursers—and magic users, for that matter—are just people doing a job. In addition to letting people know that there’s a whole ‘nother part of the Big Apple to the north, I also wanted to make sure that I portrayed characters who need to feed and clothe and house themselves. Most people make decisions based on what they can afford, and fictional characters should do likewise. At one point in A Furnace Sealed, Bram has to put his investigation on hold because he’s working a shift at Montefiore Hospital. (In addition to being Bram Gold, Courser, he’s also Dr. Abraham Goldblume, who works two days a week as an ER doctor. He changed his name for the former job because if you want your nasty monster hunted, you’re not gonna hire a schmuck named Abe Goldblume. Bram Gold, on the other hand, sounds like he can get stuff done.) He has to work that shift, because he’s already called in sick too often, and if he does it again, he’ll get fired, and it’s hard to find more work when you’re fired for poor attendance at your only-twice-a-week job.

Back in 2009 and 2010, I worked for the U.S. Census Bureau, and I got to go to a lot of different parts of the Bronx. It was that work in particular that got the wheels turning about the manifold glories of the Boogie-Down Bronx, and I wanted to bring them to the world in a way that I hope youse guys (as we say in da Bronx) find entertaining. And if you do, rest assured, I’m already hard at work on Book 2 of The Bram Gold Adventures…

← Once Again It’s 8pm and I Have Not Posted Anything Today, So Please Enjoy This Song From a 90s Australian Band
Day Jobs, Creating, and the End of the World →