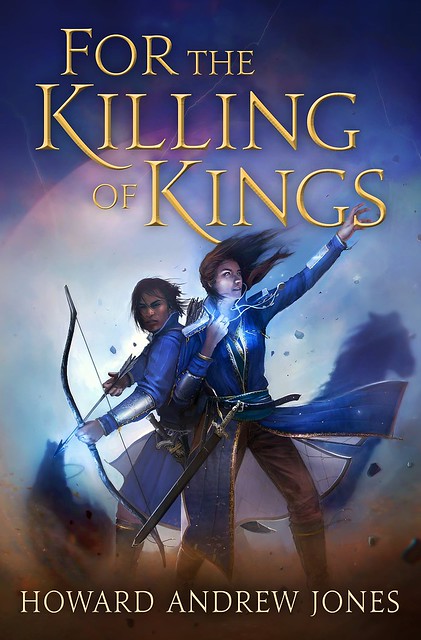 In today’s Big Idea, Howard Andrew Jones muses on the nature of heroism, and what it means for his latest novel, For the Killing of Kings.

I think a lot of us are inspired by heroism before we really know what it is. I still remember tuning into an original Star Trek re-run for the first time when I was five years old. Before long I saw Kirk and Spock stand against a horde of angry miners after they discovered that the creature everyone thought a murderous monster was simply defending its young from genocide. Those two faced their own prejudices and changed their minds when exposed to new information, then risked their lives to see the just thing done.

I wanted to be like THOSE guys. Episode after episode, even if they didn’t always have the right answer, even if they sometimes made mistakes, they struggled to do the right thing when there might be no reward but death. They risked everything for their friends, their allies, and those who had no voice.

Of course, at five, I didn’t quite get the weighty stuff, I just liked the adventure of it all. And I sure loved swashbuckling, probably because I imprinted on The Four Musketeers when I caught it in the theatre at about the same time. It may seem worlds away from Star Trek, but that movie and its predecessor, The Three Musketeers (which I caught later) were similar to my favorite TV show in the way that its characters stood as one against their foes.

Nowadays, when fame seems easily acquired by looking good, possessing a lot of money, or shouting loudly, heroism can be taken for granted, or seen as quaint: often the most celebrated modern figures are those who get away with things they probably shouldn’t, or those who act the most outrageously entitled. These are cynical times, I get it, and sometimes it seems that facts and truth are dead (along with irony) and that heroes are just people whose dark sides haven’t been scooped yet.

But I don’t think I’m alone in remaining fascinated with heroes, and wishing we heard more about them. Heroism can supersede our cultural wars because it isn’t about defending a narrow set of beliefs dictated by a few who want to stay in power. It isn’t defined by ideology, but by the selflessness of those who protect others. Above all, heroism stands in stark contrast with selfishness, that most common of evils that creeps into a person or a society too self-indulgent to keep it at bay.

Now that I look back on all my touchstones, both those early ones and later discoveries, like the accounts of brave soldiers and civilians in the Second World War, I’m not at all surprised that I’ve ended up writing about heroes. For the Killing of Kings takes the perspective of a corps of veteran soldiers as they stumble into a conspiracy that may lead all the way to the throne. Truths have been twisted, facts invented, and the less powerful silenced and ignored. When two of these warriors, sworn to lay down their lives to defend the realm, ask the wrong questions, they’re framed for murder, declared traitors, and are forced to flee for their lives, their own friends in deadly pursuit.

Over the ensuing pages their bonds strengthen as they best terrible dangers and cross terrifying lands. They have to make agonizing choices and risk everything both to learn the truth and to seek a just future for all. In short, sacrifices must be made. Sometimes, because of their actions, they discover allies where others would see only enemies. And because I loved the weird world building and the layers within layers I discovered in The Chronicles of Amber (a major inspiration for this series) they see plenty of peculiar sites and uncover multiple secrets.

Of course good heroes need good villains, but given that I want the unveiling mysteries of this book to be one of its draws, the real villains and their plans probably ought to remain hidden here – although I think the back cover mentions that an enemy invasion is taking place just as Elenai and Kyrkenall begin their journey into the shifting lands. The greatest heroes need the biggest challenges to rise above.

I love characters swathed in gray as much as the next guy, from Conan to Corwin of Amber to the Gray Mouser, and yet somehow I keep ending up writing about heroes. I just seemed programmed that way. I have an honest love of adventure stories, and I surely hope my fiction amuses and even thrills readers. But if my words can provide solace and, dare I hope, inspiration for someone to stand tall in the face of adversity, and to take right action when wrongs are being committed, why, that will be a pretty grand thing.