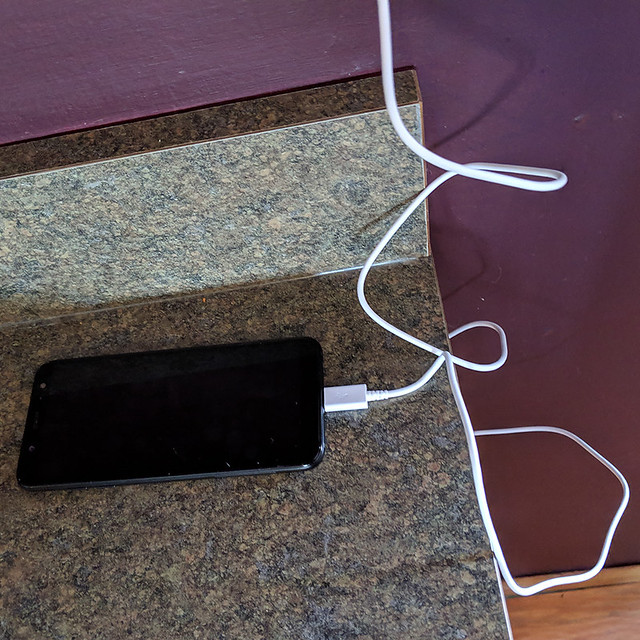 After more than a month of dealing with substandard (even for me) internet connectivity through CenturyLink, in which my already-slow internet connectivity slowed by a two-thirds, and neither a “repair” nor a new modem did anything to fix it, I decided to try something else. Sprint, as it happens, has an “unlimited” plan that features 100GB at 4G speeds, after which the speed drops to 3G speeds, i.e., not any slower than what I’m currently getting out of CenturyLink. All of this is cheaper than what I’m currently paying CenturyLink, and cheaper (in setup and monthly costs) than what I would have to pay for satellite Internet, which would not be any faster and has similar data caps than Sprint, and also sucks, because satellite Internet is inherently laggy and drops out in a rainstorm.

So, hey, look, here’s the very cheap phone I got basically to act as a hotspot. The plan is to use it primarily for the television for streaming, and to see how that works, in terms of data usage and whatnot. If it works pretty well, then I’ll be ditching CenturyLink entirely, since I’ve become tired of giving them money for genuinely shitty service that has not improved in a decade. The only downside as far as I can see is that it means I’ll likely be done downloading video games for a while, as most AAA games these days are 15+GB downloads to start and their frequent updates are now multi-gigabyte affairs as well.

Now, in point of fact this is kind of a shitty way of having to do things. I should be able to have a decent wired Internet connection without data caps. But I live in rural America, and where I live CenturyLink doesn’t have any competition for providing wired Internet, so it hasn’t bothered to upgrade its services, ever, which is why I was already puttering along at 6Mbps at best before the connection went to hell. So here I am, testing a Sprint phone as a hotspot so I can maybe watch Netflix without it pausing to download every half minute or so. I’ll let you know how it goes.