First, let’s get you all a kitten picture, stat: 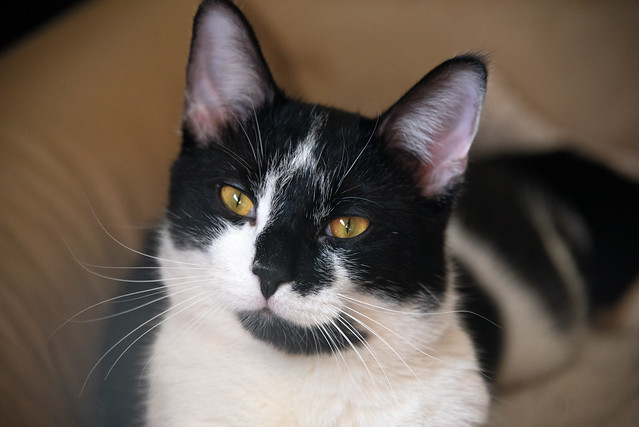 Yes, he’s adorable. And an asshole! But also adorable. As most kittens his age are. And yes, he’s still a kitten until at least late April or early May, which would be our best guess for his birthday. Enjoy these last couple months of his kittenish glory.

Second: An update on my Internet, because I know you care. CenturyLink sent a truck over earlier in the day to work on the line and after an hour or so of fiddling, the Internets speeds are actually what I’m paying for — which is still a pathetic speed, to be sure (6Mbps, same as the last decade) but it’s there. Ironically it is 6Mbps to within .1Mbps; I suppose after all my complaining they really decided to make the effort there. The upload speeds are still awful — .2 to .5Mbps — but for the first time in months I could actually upload a photo larger than 5MB (the picture you see above) without the line crapping out. This is progress of a sort.

Whether the repair sticks is the question. Today was the second time they had someone come fix the line in the last week; the first time the line worked at half speed for a day before crapping out. So we’ll see how the line is tomorrow, and the day after, and the day after that. I’d like to be optimistic, but CenturyLink hasn’t exactly inspired confidence recently.

For this reason and for a few others I think I’ll be keeping my new Sprint hotspot. Having what’s essentially auxiliary Internet isn’t exactly cheap, but it will keep me from fuming angrily and impotently when/if the CenturyLink line breaks down, which is kind of its own reward, and in the meantime I can use its (depending on the time of day) two-to-five-times faster download speed (and ten times faster upload) speed for handing certain specific heavy loads. In a perfect world this wouldn’t be necessary, but I don’t live in a perfect world, I live in rural Ohio. I figure this will work well enough until 5G finally shows up here in a couple of years.

In any event: My Internet problems are solved! Sort of! Thank you for coming along on this horrible adventure with me. At least you got a cat picture out of it.