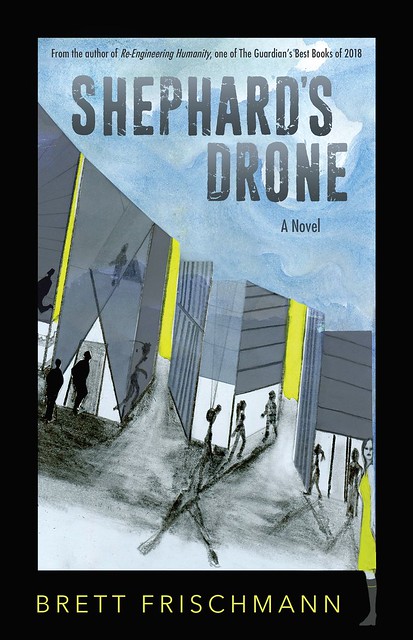 Author Brett Frischmann wrote a non-fiction book about the consequences of technology. But he wasn’t done with the topic yet, nor it with him — and that’s how his novel Shephard’s Drone came about. Here he is to explain what happened next.

Human beings have special powers. We can imagine things that don’t exist and communicate with each other in person, at a distance, and across time about imagined things. These powers allow us to develop shared culture, beliefs, laws, technologies, and others things essential to cooperation and modern civilization. What matters most is how we exercise these powers across generations to shape our world and ourselves.  This is how we engineer humanity.

Perhaps the most fundamental Big Idea we’ve engineered for ourselves over the past few centuries is the belief that despite the many environmental contingencies outside of our control that shape who we are and what’s possible, we can be authors of our own lives. We have some meaningful agency or degree of freedom. This freedom is not naturally given or inevitable. It is contingent. It can be taken. It can be lost. We can be drones.

In 2010, I began grappling with these ideas. I’m a professor who works at the intersection of multiple disciplines. So I was comfortable digging deeply into philosophy, artificial intelligence, and various branches of psychology, among others. What was new for me—and in hindsight, a bit insane—was deciding to write nonfiction and fiction books in parallel.

Last year, I published the nonfiction book, Re-Engineering Humanity, with philosopher Evan Selinger. We examine our digital networked world and the risks of outsourcing much of our lives to supposedly smart tech. Instead of worrying about the doomsday scenario of sentient AI enslaving humans, we focus on what we’re doing to ourselves. The more pressing concern, we argue, is techno-social engineering of humans who behave like dumb machines.

Throughout Re-Engineering Humanity, we use thought experiments to speculate about the near future. We tie ourselves to the mast of existing technologies and extrapolate carefully. For example, after discussing fitness tracking tech in my son’s elementary school (to be worn 24-7 mind you), we extend our analysis of techno-social engineering of children to hypothetical variations, including sensors that track mental attentiveness or mood. Our objective is simple: Help elucidate the path we are on so readers can determine whether they like where we’re headed and can consider paths to alternative futures.

Back in 2010, I sat in a bar with my friend Deven Desai. He’d written a short story and asked me to read it. It was excellent, and as Deven surely hoped, it got me thinking and after a drink that meant talking excitedly. I offered constructive criticism and suggested minor edits, but mostly I applauded his efforts. Then I told him, “You know what, Deven? I have a story you should write.”

I’d been reading a book about the ethics of genetic engineering after finishing a book about the philosophy of the extended mind. These books got me thinking about how people would choose between biotech enhancements (bio-mods) and digital tech enhancements (comp-mods). I imagined a near future world in which such a choice was necessary. Bio-mods on the East Coast, comp-mods on the West Coast, and unmodified humans in the Midwest. I began to see how such a world could come to be and what it would mean for the different societies. I explained all of this to Deven.

He listened patiently for a few minutes, but then he interrupted. “Dude, write your own book. It sounds cool. But I can’t write it. You have to.”

Deven insisted. He gave me some pointers. I bought a bunch of books on fiction writing. I got up at 5am every morning and wrote for at least 2 hours. I did this for a few years. …

Initially, I thought Shephard’s Drone would be about the near-future world. In part it is, but not exactly in the way I anticipated. Writers and writing guides often say that stories have a life of their own, that things happen in stories that the author doesn’t plot or even intend. I always thought this was BS. But then I wrote a novel and realized I was wrong. Of course, I outlined, plotted, and planned intensely from the fine details to the macro themes. But as I wrote, some unintended things just happened. There was a push and pull between my control/freedom and that of the story and its characters. I was in the lead most of the time—at least, I think I was.

Shephard’s Drone is about Kate Genet and her struggles to understand her world and her place within it. Kate is a bio-mod geneticist, a superstar in her field. She’s always been in control and had a solid plan. That stable baseline changes in the first chapter when she witnesses the sudden death of an infant and knows something went horribly wrong, despite all evidence to the contrary. A tug-of-war between the rational and emotional parts of her mind ensues; it is both disorienting and liberating.

Kate is determined to figure out what happened. It’s a classic quest for truth, an adventure into the unknown, a road trip!

Kate’s journey leads to intriguing challenges and varied relationships in the different societies. It took a dozen or so rewrites to effectively describe her interactions with other bio-mods, comp-mods, and unmodifieds taking into account her own priors as a lens. This was probably the most difficult challenge for me in writing fiction. It is quite difficult to see, much less describe for others to see, how one’s prior experiences shape one’s perspective. This is especially true when it comes to the technological infrastructures and affordances we take for granted.

In Re-Engineering Humanity, Evan and I work hard to provide a nuanced framework to evaluate the relationships between technology and humanity. We deliberately avoid utopian and dystopian extremes. Often, we found that one person’s utopia is another’s dystopia. (Consider, for example, polling your friends about the quality of life for humans in the motion picture, Wall-E.) What’s important but quite difficult to identify and evaluate is when the world we’re building for ourselves, each other, and future generations fits one person’s or one group’s utopian vision at the expense of another’s.

For better or worse, Shephard’s Drone leaves it to the reader to decide what is utopian or dystopian. Kate’s experiences in bio-mod, comp-mod, and unmodified human societies provide conflicting perspectives and an opportunity to reflect on the Big Idea permeating Re-Engineering Humanity and Shephard’s Drone, which is the contingent nature of freedom in worlds governed by technology.