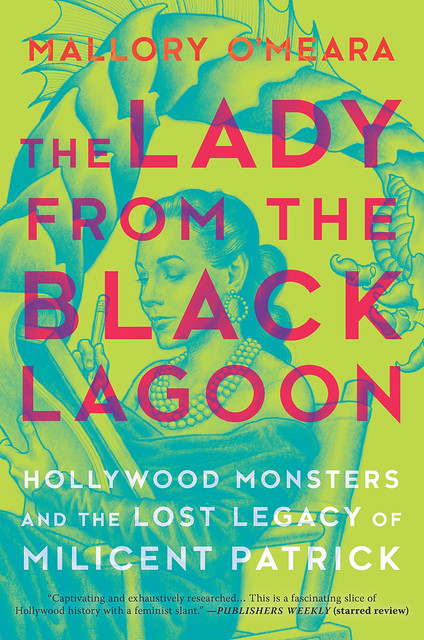 As a film producer, Mallory O’Meara knows that the amazing designs you see in movies don’t magically appear out of the thin air — they’re the work of dedicated creators and craftspeople. So when O’Meara set out to learn more about the mind behind the Creature from the Black Lagoon, she discovered a story that was every bit as interesting and compelling as the creature design itself. Here she is to tell her what she found, and what she’s sharing in her book The Lady From the Black Lagoon.

My elevator pitch for The Lady from the Black Lagoon is that the book is Julie and Julia… but for monsters. It didn’t start out like that, though.

This book started out simply as a biography of Milicent Patrick, an influential artist whose legacy has been purposely obfuscated for decades. She was an illustrator, a concept artist, one of the first female animators at Disney and the designer of the iconic monster from the 1954 science fiction film CREATURE FROM THE BLACK LAGOON.

The press and attention that Milicent got as the designer of the Creature was the pinnacle of her career. It also caused her downfall. Her boss at the time was so jealous of her being in the limelight with the Creature that he fired her. Milicent never worked behind the scenes in Hollywood again and no one knew what became of her.

While I was researching and investigating her life, it became clear to me that I couldn’t write about what happened to Milicent Patrick without writing about why it happened to her. It’s easy to hear a sad story about a woman dealing with sexism in the 1950s and think, “Man, what a bummer. That’s just how things were back then!”

But it wasn’t just how things were back then. What happened to Milicent Patrick is still happening. It’s happening right now.

I know this because it happens to me. My job as a genre film producer brings me face to face with the same obstacles that Milicent dealt with. Working in the industry that she did – nearly seventy years later – gives me a keen insight into her story. As I wrote and researched, I found parallels between my experiences and Milicent’s.

That’s when I realized that the best way to show the urgency and importance of her story was to include stories from my own life as a female horror fan and filmmaker. Milicent Patrick’s body of work created a legacy that has had an incredible amount of influence on the worlds of art and film. (THE SHAPE OF WATER anyone?)

But the events that led to her credit being stolen left their own influence on the world. This influence is felt by female filmmakers and artists and writers everywhere, every day.

I saw this in action as I worked to uncover Milicent’s life. The difficulties I had finding out what happened to her perfectly illustrate the devastating and systemic effect bias and sexism have on us. So, I decided to also include an account of my investigation and the book morphed into what it is now. Part biography, part memoir, part detective story. What I found out about her life was even more astonishing than I could have imagined.

It’s also a call to action. I hope that someday, what happened to Milicent Patrick will never happen again.

The Lady from the Black Lagoon: Hollywood Monsters and the Lost Legacy of Milicent Patrick | Amazon | Barnes & Noble | Indiebound