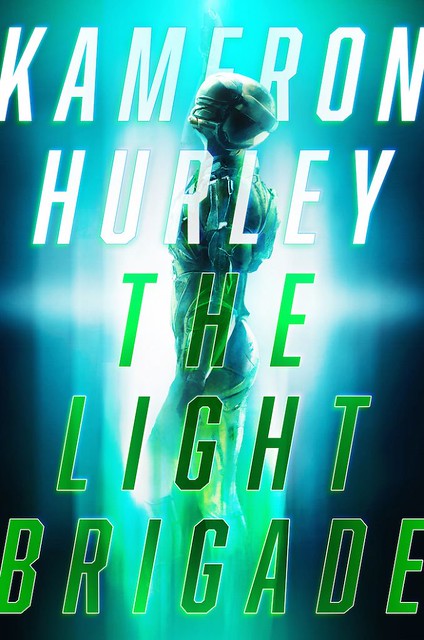 In today’s Big Idea for her new novel The Light Brigade, author and Hugo winner Kameron Hurley explains how a bit of family history is the root of her story of soldiers in the far future.

I grew up around stories of war.

My grandparents met in liberated France in World War II. He was an American GI. She was a young French woman who had lived in Nazi-occupied France.  While he talked very little about the war –one of his jobs after the liberation was driving trucks of the dead out of concentration camps – she had many stories about encounters with Nazis and living under fascism. She would proudly display the scar on the side of her head where a bullet from a dog fight overhead between US and Nazi aircraft seared away her hair and flesh. The bullet lodged in the wall of a building behind her, and she had dug it out and proudly displayed it. Her literal brush with death.

She and her friends once found a Nazi boot along the river – with a foot still inside of it – and she told us about their terror about it being found, because for every Nazi killed in her town, ten French people would be rounded up and shot. She and her friends chucked the boot into the river, praying it was never found. Her father was part of the French resistance, and the SS came to her home often to harass him. When she married my grandfather, she thought she had won a great lottery. They spent the first seven or eight years of their marriage in France as the Americans helped rebuild after the war. Her disappointment on finally arriving to the United States, unable to speak English and faced with the terrible reality of enlisted military housing in the 1950s, was palpable in every story she told us about her earliest days here.

These stories had a profound effect on all of her children and grandchildren. Many joined the military, several became career soldiers. Others married soldiers or joined the reserves. I grew up understanding that sometimes there was a greater evil that we all must come together to fight. It would take me far longer to realize that in the vast majority of wars, who was good and who was evil was a lot more difficult to sort out. The far more common war is not one of external aggression, but of politics and resource hoarding and colonialism.

I went on to study the history of war, revolution, and propaganda. My Master’s thesis explored the African National Congress’s use of propaganda in the recruitment of women fighters in the struggle against Apartheid. This line of research opened horrifying and fascinating new doors for me into the role of propaganda, storytelling, training, and politics all play in creating, uplifting, solidifying, and destroying human systems of government.

The initial spark for this story began with the idea of exploring a near-future stepping stone to instant teleportation – busting soldiers down into light. But what makes this a complex piece of work is the real world research that went into the politics and realities of war. The Light Brigade has a lot of big ideas: time travel, interplanetary war, dangerous tech, propaganda and psychological manipulation of civilians and soldiers. It also has a lot of ideas crawling beneath the surface, thoughts on how war changes us and our relationships, how conflict breaks us down, how hope for the future can keep us going long after a pessimist would have stopped.

Even knowing what I do about the horrors human beings have committed to themselves and one another, I still believe in the future. I believe in the future because I understand that the war machine is not some innate human compulsion. It is carefully nurtured and celebrated by those in power. The firing rates of soldiers in the first two World Wars were abysmal by modern standards. They threw all of these kids into battle and only 20% of them would actually fire at another human being out on that field. The rest shot without aiming at anything at all, or shot at the ground, or simply did not fire. The US military completely transformed how it trained soldiers after World War II, with an emphasis on teaching human beings how to murder each other without hesitation. Using advanced psychological tactics, the US military improved firing rates from 20% in World War II to 97% in Vietnam. And once it’s been taught, there is no program that’s been designed to reverse that training.

I have stories like these and so many others to share. I’ve used first-person accounts from soldiers – my friends, my family, and those I’ve collected through my research –to create the intimate, beautiful and horrifying world of The Light Brigade. In truth this book is less about predicting the future because so many aspects of this future are already here. Instead, it challenges us to rethink our present, and everything that comes after it. What is the future we want to build? How are we going to get there? Because everything is constructed. We can teach ourselves to create any type of future we want. But first we need to understand how much of the present is simply social conditioning.

That’s what I love so much about writing in this genre. It challenges us all to rethink our assumptions and expectations. It’s a journey I hope you’ll all take with me.