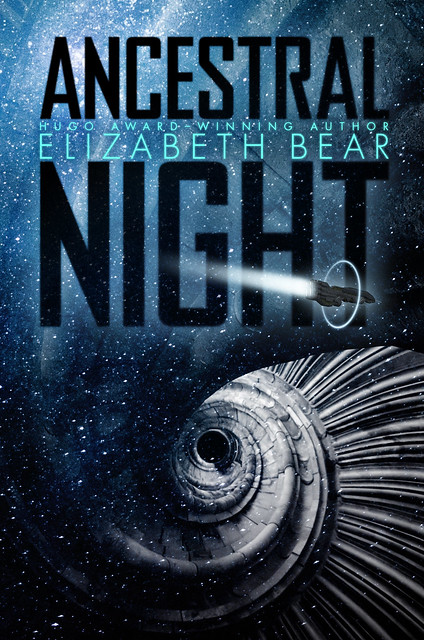 Sometimes you think a book is going to go one way, and then it goes another, and that turns out — perfectly fine, actually! Elizabeth Bear had a bit of that experience with her new novel Ancestral Night. Here she is to explain the zigs and zags.

Ancestral Night had a hard time getting born.

It’s not the book’s fault. It’s possibly the author’s fault—or possibly the fault lies in the stars. The world kept changing radically on me while I was writing it, you see—personally, politically, and profoundly. And as I and everything around me underwent those changes, the book wound up changing too.

I had originally envisioned something much more along the lines of an epic space opera with multiple points of view and a lot of focus on the politics. The politics were the big idea around which the world was built, after all. The idea of a massive, multi-species, basically benevolent but imperfect post-scarcity bureaucracy devoted to maintaining peace and the well-being of its citizens, however imperfect it could sometimes be in implementation, was appealing in 2014. I feel like it’s even more appealing now, frankly: it would be nice to believe in functional governments again.

I was inspired by Iain Banks and his Culture novels, but I wanted more detail on how a post-scarcity society and a completely novel form of government might work. The best, most egalitarian, fairest systems of government we have now are based on structures that are millennia old at their core. Democracies and republics actually use a series of bronze-age technologies to approximate some of the better aspects of group decision-making protocols that science shows us are the most efficient known way of getting stuff done, but the technology exists to remove even more barrier to making those protocols work.

And we live in an era when nationalism and factionalism and classism and bigotry are the biggest barriers we have to addressing existential threats so vast that they require species-wide cooperation, which is a thing we can’t quite seem to get our teeth into. And in that case, possibly the fault likes not in our stars, but in ourselves.

So what if we could fix some of the shortsightedness evolution has given us, now that it’s become maladaptive? What if the greatest weapon we have for enduring our survival into the future is self-awareness and the ability to look at ourselves and decide to be better people? Not just on a person-by-person level, but as a species?

What if we could decide to grow up and deal with our problems, instead of ignoring them and assuming somebody else will handle the cleanup?

In the universe of Ancestral Night, humanity made these decisions long ago—after we nearly died out as a result of not making them for too long. Our species made it to the stars, but in the wake of a near extinction event that left us with no options except to die, or to change. We developed a system of government without professional politicians, where decision-making is handled through distributed systems, simulation games, and advanced forms of modeling. Where people are called to serve as executives for a limited time, and it’s as annoying as jury duty.

The way the book turned out, however, all of this receded into the background. I found that to tell the story I wanted to tell, I needed a narrative focused on adventures and the vast distances of space, where travel even at faster than the speed of light takes months and there’s no quick means of communication between remote points. I needed to show my protagonist racing to beat propagating information, and wrestling with massive ethical questions.

That was how, on my third or fourth attempt to write the thing, I wound up in the head of salvage operator Haimey Dz, getting her to tell her story herself.

It was an odd choice—I recognized that even as I was writing it—to tell this story about deep time and vast reaches of space and personal responsibility and dueling ideas of what it even means to be human through a single first-person narrator. But it’s also a story about the unreliability of personal experience and memory and what a pain in the ass our atavistic and uncooperative neurology can be when we’re just trying to get stuff done, and I think that was why diving deep into one character’s experience was the tack that finally worked.

The only thing I’m sad about is that it meant I got to spend less time than I planned with Mantis Cop. I hope you’ll forgive me, although I understand if you don’t. I acknowledge going in that Mantis Cop is totally the best, and the point of the whole novel, and all the pages that don’t involve Mantis Cop are wasted. WASTED.

But that one small point aside, I am pretty happy with the book I finally got, after years of wrestling.

I hope it works for you too.