Checking In On That Diet and Exercise Thing 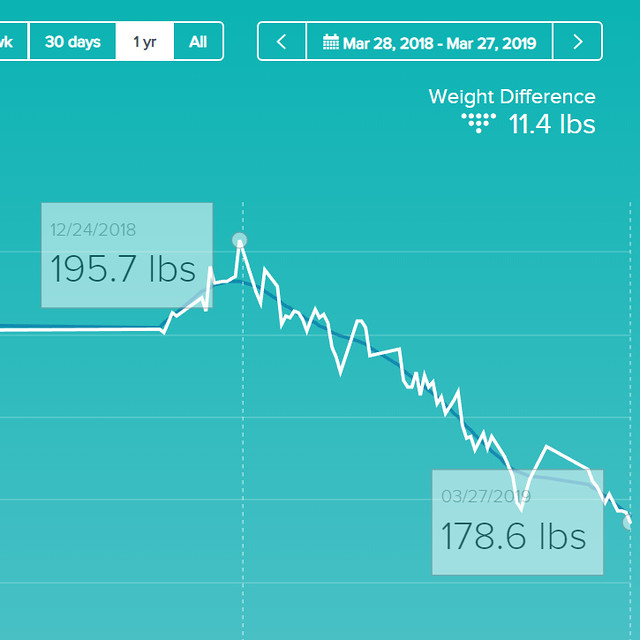 As some of you may recall, I decided that one of the things I wanted to do, heading into my 50th year, was to drop my weight down to about 170 to coincide with birthday, which is on May 10. Mind you, what I really wanted to do was hit 180 going into 2019, and then ease into 170 over four months. As you can see from my top weight on Christmas Eve up there (for those of you who are sight impaired, I weighed 195.7 pounds that day), I didn’t quite make that goal.

With that said, this morning I was 178.6 pounds, which represents a drop of 17 pounds from that top weight, and also a fairly consistent and regular glide-down in weight from that top amount on Christmas Eve. 178.6, I will note, represents the least I’ve weighed since at least October of 2015 (when I clocked in at 180.1). Provided I keep at it, it’s not entirely outside the realm of possibility I’ll hit my weight goal somewhere near my birthday; even if I don’t I still plan on working toward that benchmark.

In case you’re wondering, the secret for me to dropping the weight is — surprise! — diet and exercise. Basically I’m eating fewer calories on a daily basis than I expend, and most days I spend about a half hour on the treadmill, which gets my heartrate up and burns roughly a candy bar’s worth of calories immediately, and gives me an overall larger number of calories burned for the day (because of a halo effect of having a slightly elevated metabolism). Basic diet and exercise is unsexy — I’m not doing keto, or intermittent fasting, or whatever, although if that’s done the trick for you, cool — but it’s working for me.

I also got myself a Fitbit Versa to track steps, heart rate, and such, and use the Fitbit site to track the calories that I’m putting into my body. Now, before anyone brings it up, I’m aware that a) calorie counts for food are deeply approximate, b) the data that my Fitbit tracks (steps, calories, etc) are even more approximate than that. I’m less concerned about exact calorie and step counts than I am getting a general idea of things, and also, being who I am, gamifying the diet and exercise helps me immensely. I certainly take the specific daily results with a grain of salt — and yet, I’m still losing weight.

The other thing is that I am genuinely now feeling better about myself than I was in November and December, when I had edged over 190 pounds. It’s not just that I was carrying more pounds than I am now, although obviously there was that as well. It was also a general unhappiness at the state of my body and how I was relating to it. I’m not someone who believes you have to be thin to be either healthy or happy — there are all sorts of body shapes that work for various people. What I do know, however, was the shape I was in was not what I wanted, and that it was worth it to start making an effort get to a place where I was happy with my body. I dislike exercising in a general sense — it’s kind of boring, no matter how one tries to spice it up — but I do like what it’s doing for me, both in terms of physical and mental health. So I’ll keep exercising.

(I do like that I’m getting better at exercising. I mostly do the treadmill, and when I started, walking at four miles an hour for 20 minutes wiped me out. Now I’m running the entire time I’m on the treadmill and when I’m done I don’t feel like I’m going to throw up. This is progress.)

Losing the weight and generally getting healthier was the goal; when I hit 170 I’ll do an assessment and decide what I need to do from there. One major new goal is likely simply be to maintain a baseline weight and exercise range, so I don’t find myself feeling unhealthy due to laziness and sloth. So no matter what, exercising and watching what I shove into my mouth is going to be part of the new normal for me. I’m about to be 50; there are worse things at that age, I suppose.

In any event: This is where I am, diet and exercise-wise, here in late March.

← Zeus Wants You to Know That “Head On” is Now Available in Paperback in North America Today
Look, It’s the First Moth of the Season →

39 Comments on “Checking In On That Diet and Exercise Thing”