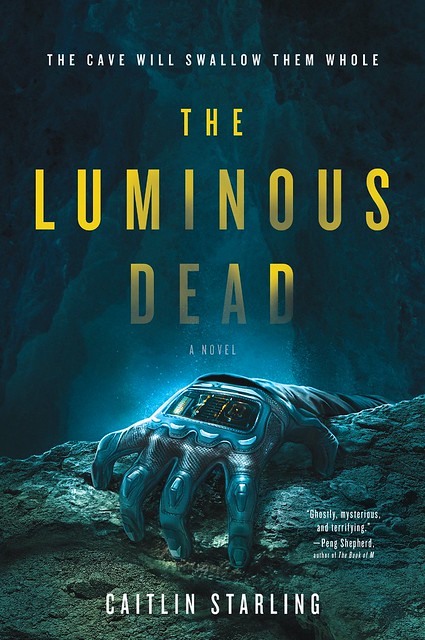 The people authors know in their life are often significant in their fiction, either through their presence or their absence. In discussing her novel The Luminous Dead, author Caitlin Starling reflects on a person in her life who is very important to her, and how that person has made herself known in Starling’s writing.

When I was nine years old, my mother died.

It’s strange, losing a parent that young. I was old enough to remember her, but young enough that while I knew she’d been sick since I was born, and had a name for her death sentence (AIDS) since I was two, I hadn’t understood. After she died, I insisted on going back to school within a day, maybe two. I finished fourth grade. I finished elementary school, middle school, high school, and to all appearances, I moved on. I didn’t cry more than a normal child, didn’t act out more, didn’t really think about her as I grew up.

And then she started appearing in my writing.

It’s a well-worn trope, the dead mother who is convenient for the plot. She provides motivation, as well as logistical handwaving. The character doesn’t go to her parents for help, because she has no parents! And look, she has something to be appropriately angry about when the plot calls for it, but otherwise we’ll ignore the messiness that sort of death leaves behind in the real world. I learned from that playbook, of course, but instead of convenient, the dead mother began to dominate my characters’ lives. In my fandom days, I would fixate on figures who had suffered loss, estrangement, guilt, shame, and I would pry into them until I might as well have been writing original fiction.

When I finally began writing The Luminous Dead, I went back to what I knew. Gyre, the main character, doesn’t have a dead mother, but she does have a hole in her life in the shape of that mother. She has a father she’s emotionally estranged from, thanks to that hole they both share. And then there’s Em, who (spoiler!) lost her father young, then watched her mother fade away and, ultimately, disappear. The Luminous Dead is a claustrophobic story, a thriller set in a cave with just two characters, but more than that, it’s an emotional psychodrama. Every inch of the plot is drenched in grief, before we even know exactly what’s been lost, exactly how that’s pushed and pulled at the characters until they’ve arrived where they are.

Grief is not simple. It is not predictable. It is not clean, but not quite the mess you expect, either. It strikes at unexpected moments; after years of barely thinking about my mother, she roared back into my life because I was angry, angry that she wasn’t here to know my spouse, or to read my book, or just to sit and talk with me so that I could know her as an adult, not just a confused child. And then she was gone again.

I have friends who lost their mothers as young adults. I have sat with older relatives as they became orphans in their fifties. Every response is different, shaped by the relationships lost and the lives lived up until that moment. Even my own, which I know so well, looks different in different lights, at different times of day.

I see the world the way that I do because she is no longer in it. I treat distance and death in much the same way; when I can’t see somebody in front of me, my conscious mind forgets them, to save me the pain of losing them. When somebody dies, they simply stop existing, until a dream reminds me that we will never talk again.

Each story I write is drawn back to this first loss, whether I intend it to or not, and each time, I find a different facet of grief to delve into, to tease apart, to use to express elements of my own pain in dramatic form.

But it does help.