I wrote this on Twitter today, and am posting it here both for archival purposes and also because, hey, it’s applicable in this medium as well.

A general statement because it’s happened to me more than once here on Twitter and elsewhere:

So, hey, if I’m noting a good thing happening in my career and your response to it is to dump on another author/creator in some way, you’re ruining it for me.

1. Because that author/creator you’re dumping on might be a friend, or someone I otherwise like and respect. It’s not fun to have someone else dump on your friends, even (especially) when it’s couched in praise for you.

2. Because success is not a zero-sum game: In nearly all cases I do not succeed by making someone else fail. Dumping on other authors/creators to praise me plays up the Highlander Theory of Success (“there can be only one!”) which is really not how it works at all.

3. Because when you dump on someone else while praising me, whether you know it or not, you leave me in the position of either having to say something about it, or saying nothing, which can be taken to be an implicit acceptance of the dumping. You make me police a happy moment.

4. Because, really, it’s kind of weird. It’s okay to just say “Congrats!” or some such without then going on to trash some other person. If you find yourself doing that, please give some thought to why you thought you needed to do that.

Now, I understand that some of you don’t intend to be rude or awful, you mean to be clever and funny. But remember that the failure mode of “clever” is “asshole.” Someone who is being trashed on will see your words but not your intent (as will everyone else). So think.

Also, I understand that some might feel that if the person you’re trashing on is (by your estimation) famous and/or rich, then maybe a little online trashing is par for that course. But a) ugh, and b) it doesn’t follow that you should do it in that thread. Make your own.

You don’t raise me up by trashing other people. You drag me down. And when you do that you make it less likely I’m going to share good news here, because I don’t want to have to wade through people trashing on friends and colleagues in what should be a happy moment.

So, please, keep in mind, for me and for others: You can be happy for the people you like without trashing other people. Give it a try. Thank you. 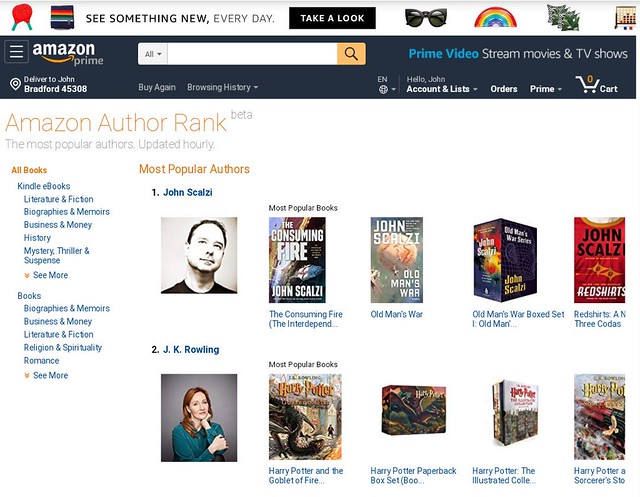 So, that’s nice for me. I’ve been in the top five of the Amazon Author rankings before, but this is my first time at the actual top of the heap, and while I am as always reminding people that Amazon’s rankings are opaque and fiddly and not necessarily indicative of much other than Amazon’s opaque and fiddly rankings, still, it’s nice to be even temporarily on top of a list that includes Rowling and Patterson and King, and — well, every single other author who sells their work on Amazon, I suppose.

So, I’ll enjoy the moment, thanks. Mind you, it won’t last. But that’s all the more reason to enjoy it.