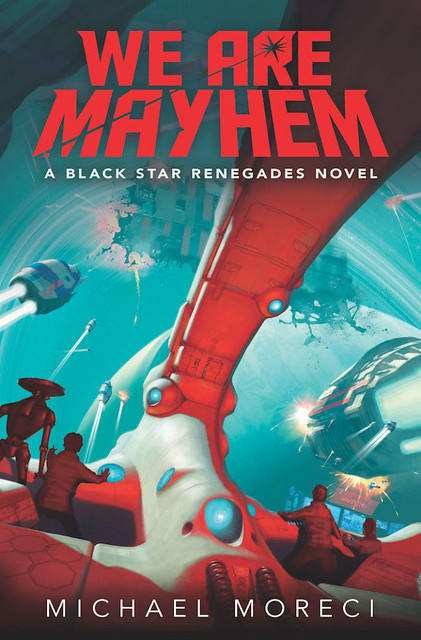 If you’re a writer, is it better to be the proverbial tortoise or the proverbial hare? And does either matter as long as you’re still running the race? Michael Moreci considers this topic today in his Big Idea, and how it relates to his newly released novel, We Are Mayhem.

Now, I’m certain this isn’t news to most people who read this blog, or anyone familiar with the book market in general. It’s no secret that most books are not bestsellers. In fact, most books end up losing money for their publisher. I came into the book world from comics; when my debut novel, last year’s Black Star Renegades, was published, I already had a track record writing both original and licensed comic books. And, to be certain, comics and books aren’t all that dissimilar—especially when it comes to profitability. Still, I experienced a learning curve when entering the book world, and I’m still learning today.

I’ll never forget what my sales rep told me, soon after Black Star Renegades was released. We’d met by happenstance—well, happenstance and some assistance from my friend and bookseller extraordinaire, Javier—and she imparted a piece of advice that has stuck with me. She said: The important thing is for your book to keep selling; so many books come out, sell for a few weeks, and vanish. They never sell again.

I thought, at the time, this had to be hyperbole. I was wrong.

Weeks later, I was at a book signing, and I was seated next to another first-time author. Unlike me, she had a tremendous amount of publishing knowledge from her time working at one of the major book houses. She gave me the same advice as my sales rep, reinforcing the idea that for books to be successful, they have to stick around. She—and I don’t want to reveal her name, for the sake of her privacy—told me a story about a book that her publisher had paid over $100K to acquire; this book had been out for two months and had sold ~two hundred copies. The math on that, as you might assume, isn’t good.

From the day Black Star Renegades was released, I was determined to make it a success; I doubled my efforts upon learning these horror stories of books that get released and, massive advance or not, disappear weeks later. Look, being candid—I knew Black Star Renegades wasn’t going to be a bestseller. The trick, I figured, was to make sure it stuck around.

I forget the exact numbers, but I did something like 40 events in 2018, ranging from bookstore signings, book festivals, comic conventions, and library appearances. Granted, I love this stuff; I love being part of book clubs, leading library workshops, and talking about writing in general. But 40 is a lot. And I’m exhausted.

The results, though, are real. Between Black Star Renegades and its sequel, We Are Mayhem (just released this week!), I’m going to earn out my advance (meaning my publisher will recoup the money they paid me to write these books). Would I consider these books to be a runaway successes? Nope. But—there’s something to be said about finding success in longevity. Because that’s what publishing is, for many writers: the ability to stick around. It’s what my writing teachers taught me, and what I teach my own students. Making it in this field is a marathon, not a sprint, and the marathon doesn’t end when your book is out.

Getting to the actual books, having the temerity to stick around is something that’s often on my mind. At the core of both Black Star Renegades and We Are Mayhem is a story that centers around what happens when the messiah figure (and we all know the prevalence of the messiah complex in fiction, and in real life) is taken off the playing field. What happens when a magical someone isn’t going to fix all the world’s problems?

I volunteered for the Obama campaign back 2008, and I’ll never forget the day after he won, when everyone saw the campaign’s success as the end goal—they figured Obama was going to fix everything, and that would be that. But that’s not that. Like finding success as a writer, the goal of bettering the world is an ongoing effort. You have to endure. You have to be dedicated to your cause and strive and sacrifice to make things work. That’s what I wanted my characters to discover once their messiah is gone and their backs are pushed against the wall. They face tremendous odds in having to topple an evil galactic empire, and without any hope for a magical solution to help see them through. But in this vacuum, they find hope in unity; hope in the will to defy the ruling order and fight for what’s right. And I think that’s a story we all need in our lives (especially these days).

So, We Are Mayhem picks up where Black Star Renegades left off. The galaxy is at war. Ace pilot Kira Sen is leading a group of resistance fighters against the Praxis empire while Cade Sura wrangles with the destiny—in the form of a powerful, mythical weapon—that was shoved in his hands. The book is a little bit of Star Wars, a touch of Arthurian legend, and a whole bunch of space adventure fun.