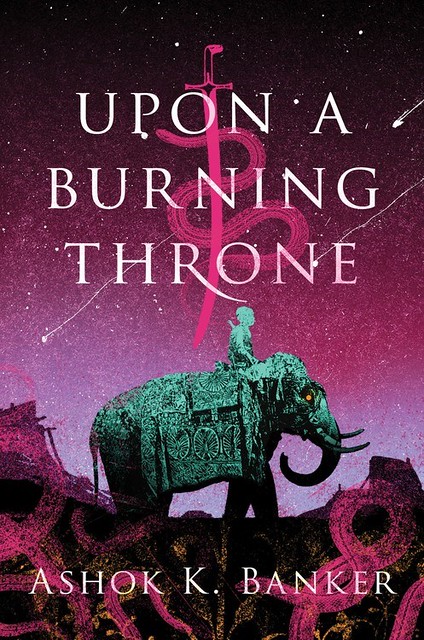 For this Big Idea, Ashok K. Banker writes an epistolary essay to someone who is not me, about his new novel, Upon a Burning Throne. Who is the recipient of this letter, and why is sent to them? Read on.

We’ve known each other a while, you and I.

That’s why I get to call you Effie. I know you don’t let anyone else call you that. It’s our special thing.

The folks reading this are wondering what I’m on about. Who the eff is Effie, they want to know.

John, whose blog this piece is appearing on, also wants to know What’s the Big Idea.

First, let me introduce y’all to someone who needs no introduction.

But she’ll always be Effie, to me.

Effie and I have been close for a very long time.

In a sense, she was my first love.

I first discovered her in an encyclopedia called The Book of Knowledge. It was this set of oversized hardcover volumes bound in midnight blue cloth. In the articles on Mythology, I first came across the world of fantastic beings, demi-gods, legendary heroes, amazing quests, epic battles, incredible worlds.

Sure, it was called Mythology.

But even back then, I saw it for what it really was.

I devoured all those articles over and over. I tried tracing out the wonderful illustrations (mostly classic paintings reproduced) and coloring them so I could pin them over my bed. I was really young at this point, so young I don’t even want to admit how young I was, and reading those articles in that encyclopedia also made me aware of how easy and enjoyable this thing called reading could be. So much so, that it got me hooked to reading way above my age level, a practice that continued throughout my childhood and adolescent years. So in a sense, Effie was the one who got me hooked on reading for life.

You have to remember that back then, Epic Fantasy as a publishing label didn’t really exist.

Back then, people like Isaac Asimov were still arguing that all imaginative fiction was really fantasy, a view which (as I recall) didn’t go down well with many die-hard conservationists of “hard” science fiction. Tolkien was only just starting to be rediscovered by a whole new generation of readers in America. And most epic fantasy books tended to be really short standalone paperback novels a couple hundred pages long at most. They were put out by the same imprints that published SF and there was often an apologetic air about them, almost as if the publishers and editors were saying “Hey, here’s a side order of fantasy to go with your SF. Now, let’s get back to talking about our main course, Science Fiction, the big granddaddy of all genre.”

But I could always recognize you, Effie, even when they covered you up like a nun with a bad habit.

You went by many names, like a secret agent donning multiple disguises for a variety of undercover missions.

And always, you were Epic and Fantastic.

As time went by and Tolkien became a rage in America, setting off a feeding frenzy among readers, publishers, authors, all hungry for “more of the same but different”.

A rumbling army of writers went to work. Reprocessing Tolkien but with more American-friendly prose and dialogue. Reworking the tropes but tweaking them just enough to make them their own, but also undeniably more…American.

The Americanization of Effie began, even as people acknowledged that Effie herself existed.

The gatekeepers processed you through the Ellis Island of US Publishing and turned you into an Apple Pie version of yourself.

A lot of terrific books came out of it.

Some better than others, some truly awesome, others…not so much.

Even when there were orcs and trollocs, goblins and elves, stone castles on high mountains, sieges and battles, great roaring armies of the undead, dark lords and white knights, somehow it all read like it had been processed through a machine that marked everything with a “Made in USA” tattoo.

American hero in a strange land. Fantastical worlds that looked different at a glance, but were really just American versions of what were supposed look to like “other” worlds.

Gone were the inscrutable mysteries of cultures and minds that were so far removed from our own present day that they were truly different.

Gone was the magic of bygone eras that had never existed and probably never would.

Gone was the sense of wonder that came from discovering fantastical worlds perceived through genuinely alien eyes.

In their place were now the familiar characters, personalities, ways of talking, acting, responding, behaving, as any of the equally familiar puppets that moved their lips and hips in American TV shows and movies.

The fascination of the unknown, the shock of the unseen, the delight of the never-before-experienced was gone.

Replaced overnight by doppelganger tropes that simulated the original ones but were really just super chain franchise product.

They pretty much effed you up, Effie.

Turned you into something that went against the very grain of what you were.

Even at its most diverse, its most inclusive, its most genre-bending, globalizing, all-embracing best, American Epic Fantasy was now painfully…American.

So here’s my Big Idea.

I took this epic poem called the Mahabharata, composed in Sanskrit some thousands of years ago. Some say, it’s the oldest story ever written. Whether or not that’s true, it’s certainly the biggest, and the most audacious, ambitious, mother of stories you’ve ever read. It’s truly a mothership of Epic Fantasy. Every genre, every trope, every plot, every character, every twist, every scene you could possibly think of, is in there, and then some.

There’s a line in the Mahabharata itself about itself – yes, this is an epic that spends a lot of time talking about itself, the ultimate self-aware sentient story cycle – that says “Everything you seek is here. What is not here, is nowhere else.” After decades poring over it time and again, I can pretty much confirm that with two thumbs up.

But I didn’t just take this epic and Effie it up.

I set out to write an original Effie that would not reference anything, anyone, or be in any way, American.

A genuinely “other” Epic Fantasy.

The result, Effie, is my love song to you.

Like the title, it’s just a tad bitter at first taste, because, well, it’s not the usual fare served in America.

It’s spicy, as in, real Indian spicy – not the stuff that they serve up in (the wonderful) Indian restaurants here in the USA – the kind of Indian spicy that has sweat pouring down your face and all your mucus membranes (and I do mean, all) on fire for several hours, but is goddamn awesome. It sets your hair on fire and you will never again be able to settle for sugar-laced American chain food once you acquire a taste for it.

The first book is called Upon a Burning Throne.

And just to prove how un-American it is, Effie, let me give the readers of this piece a teensy-weensy example.

The main protagonist of the entire series only appears very briefly in this first book.

And she’s just a baby in that one chapter.

Her story actually begins in Book 2, A Dark Queen Rises, which comes out next year.

Because this is not an American Epic Fantasy.

It’s not even an Indian Epic Fantasy.

Sure, it’s inspired by Indian mythology, and the DNA of the Mahabharata is all over it.

But that’s like saying I’m Irish because my grandmother was Irish. (True.)

Or that I’m Portuguese because my grandfather was Portuguese. (Ditto.)

I’m all those things and then some.

And the Burnt Empire Saga is a lot of things too.

But one thing it’s not is American.

Check it out if you want to see what that’s like.

As for me, I’m happy to take back Effie to her roots.

The unknowable, inscrutable, not-quite-human-yet-intensely-humanistic mythopoetic mystery realm of the forgotten, the never-was, and never-will-be.

That’s where you belong, Effie.

That’s my tribute to you.

Accept this offering with all my love and humility, Effie.