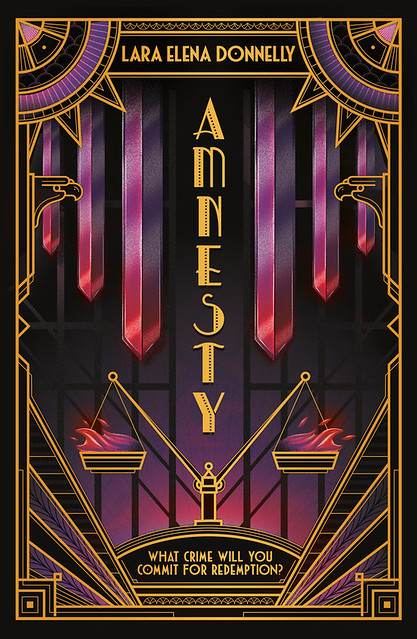 When, as a writer, you find yourself caught between two tropes, what do you do? And is it a bad thing that you’re confronting two separate writing tropes in the first place? In her series that began with the book Amberlough and continues now in Amnesty, the third book, author Lara Elena Donnelly confronts her tropes and finds a way through them.

For a long, long time, Amnesty was nothing but a big idea.

My debut novel, Amberlough, was meant to be a standalone. A tragedy with a bitter ending, the only hope in a burgeoning resistance driven by death and loss. A story about people who fail, over and over again, to communicate with each other. Who fail to stake a moral, political, or emotional claim early enough to make a difference.

The character who fails biggest is Cyril DePaul. Already back-benched when the book starts, after a botched mission that’s left his confidence shattered, every decision he makes has his own interests at its heart. Nobody else’s enter into it. Even his gambit to save the life of his lover is self-centered; who wants to save their own skin only to live on lonely?

When I first wrote Amberlough, Cyril perished on the page. I had read enough spy novels to know that the bad spy usually dies. It’s not a job you can half-ass or bumble around in and still expect to avoid a bullet in the back of the head.

But I had also read enough fiction to know that being queer is another way to end up dead by the end of the novel. Cyril’s death fell pretty neatly into the trope known as “Bury Your Gays.”

I was caught between two tropes: one I wanted to lean into, and another I had frowned over in many other media properties. And I had gotten myself there by thinking how satisfying it would be to queer such a macho genre as the spy novel (though let’s be honest: Tinker Tailor Soldier Spy had already done it, and done it well).

But all of this isn’t my big idea. My big idea came when feedback from my editorial team poked at the ending–both my agent and my editor earmarked the potentially problematic death. Could we not just make it a little more open-ended? Not quite so…death-y?

I was torn, and also confused and kind of angry. I had written this ending knowing full well the risk I ran, and chosen to keep it during submissions because it felt right for the story and the character’s arc. I also didn’t think I would have been urged to unkill a straight character.

I have a lot of complicated feelings about tragic queers. But as several friends have said to me lately, “complicated is good. Complicated means it’s worth discussing.”

I felt then–and still feel, a lot of the time–that often there is a pressure on queer characters and queer stories to combat the “Bury Your Gays” trope, or the gay villain trope, or any number of other tropes, by telling stories without death, without tragedy, without detestable people. And yes, the world deserves happy, heroic queer characters. But it also deserves nuanced stories about flawed and fully-developed queer characters who sometimes hurt others and are hurt themselves.

Unfortunately, nowadays the labor of undoing the harm caused by these tropes usually falls on stories that center queer characters–often on stories by authors who are queer themselves. Many queer authors hesitate to write stories based in their own experience, wondering if they are too dark, if they perpetuate the tragic queer narrative. And many times, straight authors including queer characters in heroic, happy narratives write versions of queer people that feel disingenuous or flat; that don’t engage with the nuances of living with a queer identity, some of which can be complicated and yes, painful.

I don’t like the idea that tropes–even Bury Your Gays–should be avoided at all costs. It’s not only simplistic, it’s impossible. If you write fiction, you’re going to write a trope someday. My take on tropes is that when they show up in a story they shouldn’t be dismissed out of hand, but interrogated, turned on their head, and shaken down for their milk money.

So, I wrote two more books. And here we come to my big idea. There are spoilers ahead, so be wary if you mind that kind of thing.

Removing an explicit death scene and replacing it with a much more open-ended culmination felt strange to me, as an ending for a standalone. And the idea that this simple elision addressed the tragic queer trope didn’t quite scan for me; the book is still a tragedy. It still features queer characters. Changing that final scene with Cyril was symbolic, yes, but felt hollow somehow–like it lacked the intended resonance of the original ending. It felt like avoiding a trope on a technicality.

Still, given the feedback, I began to envision a further arc to the story; if Cyril didn’t die, what would his life look like? As a bad spy, a poor communicator, a child of privilege, and a fascist collaborator burdened by guilt, where would he go in this world turned upside down by political upheaval? And, if he ever surfaced again, how would he be treated by his friends, family, lovers, and public opinion?

Essentially: if death was not the final note in a tragic character arc marked by personal failures, what could I replace it with? What was a fate worse than death, to and for Cyril DePaul?

Facing the music, of course.

In Amberlough, death was a consequence for a long string of bad decisions made by a desperate man with flexible morals. I started thinking of the stack of consequences Cyril would have to face if he lived. There were a lot of them, ten times more complicated than a clean death might have been. And they were harder for Cyril to take, as a character, which as any writer knows makes for rich material.

In essence, my big idea was, “If I avoid this trope, it won’t be on a technicality. It will be on my own terms. And those terms will be devastating.”

In the actual writing of the book, things turned out differently than I had envisioned when I set out. But I hope I still succeeded in turning the simple evasion of a trope into something much thornier, that has readers asking themselves questions about guilt and redemption and who is forgiven for what, by whom, and why.