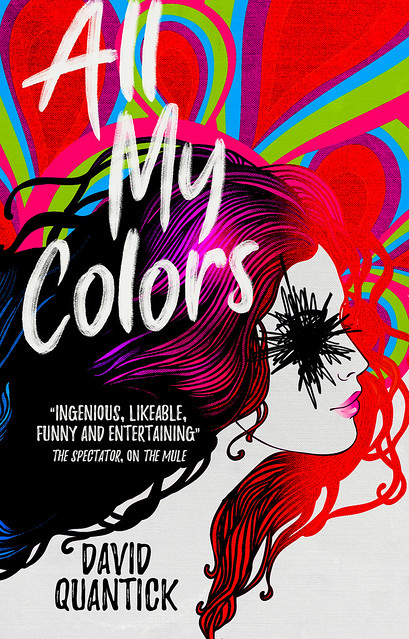 For his novel All My Colors, author David Quantick had his protagonist do a very bad thing. No, not murder. No, not assault. Something much worse: Plagiarism! Of a sort…

One day I got so frustrated by not being able to find the story that I lost my mind slightly and considered writing it myself. I talked myself out of this insane plan quite quickly – as well as being a rip-off, the story would just be a mess – but something stuck in my brain. What if someone did that for real? Wrote a story that already existed and passed it off as their own? And what if the story was more than a story, it was a classic novel, like Catch-22 or Lord Of The Rings, and somehow it had been erased from everyone’s memory?

And wouldn’t the person who wrote that book deserve to be… punished?

When you have an idea, it can go lots of different ways. This idea was not just a book idea, but it was the basis of a horror novel. I don’t know why I thought that, but it just worked that way for me. I’d never written a horror novel, but I love Stephen King and Neil Gaiman and I could see this being like Richard Bachman’s Thinner – not the same plot at all, but the same working-out of the plot. Thinner is one of the most relentless books ever written. A man upsets someone, they curse him, he gets thinner, and that’s it. The same with All My Colors. A man steals an idea, writes it, there are consequences and that’s it.

Except obviously that’s not it. I wanted to make my writer – Todd Milstead – an asshole. I thought that would be more fun, especially when bad things are happening to him, and there was something about the way he treated women in the story that was interesting as well. So the consequences of him stealing the idea – and he has an eidetic memory, so when he writes the book, he literally does that, copies it out of his asshole brain – would be fun, for me if not for him, and they would be something to do with Todd and women.

After that, the other decisions fell into place. The Bachman aspect of the book made me want to set it in the late ‘70s, like a real Bachman book, and to set it in America. In my first marriage, I’d spent a lot of time in Illinois, near DeKalb and Aurora, and I thought it would be more interesting if the book was set there, rather than New York or Los Angeles (although New York does turn up). And also I could have fun making a soundtrack.

I love American ‘70s rock, FM or AOR or whatever it’s called. The logo bands. Boston, Kansas, Styx, Toto… they somehow suited Todd, who wouldn’t be a music obsessive like me, but would do a lot of driving with the radio on, singing along to songs by bands he didn’t know the names of. And when I thought about Bat Out Of Hell, the insane vampire Springsteen anthem written by Jim Steinman and sung by Meat Loaf – it’s one of my all-time favourite albums – I had a lot of new ideas.

That said, the book could have been set almost anywhere at almost any time because the core of it – the central theme – is nothing to do with Meat Loaf, or Illinois, or even jerks, but men and women, and men being jerks to woman – and other men – and, to some extent, about creativity and writing (Todd enjoys all the trappings of being a writer but he can’t write at all). It wasn’t actually meant to be a funny book but people have seen humour in it, which is fine (I have written on TV shows like Veep and The Thick Of It) and some of it is meant to be scary, and people have also said it’s scary, which is very much fine. Mostly, though, I think it’s about making a morally wrong decision, and discovering that what you thought was going to be a dream is actually a nightmare.

Which, now I remember it, is what that short story that I could never find was about.