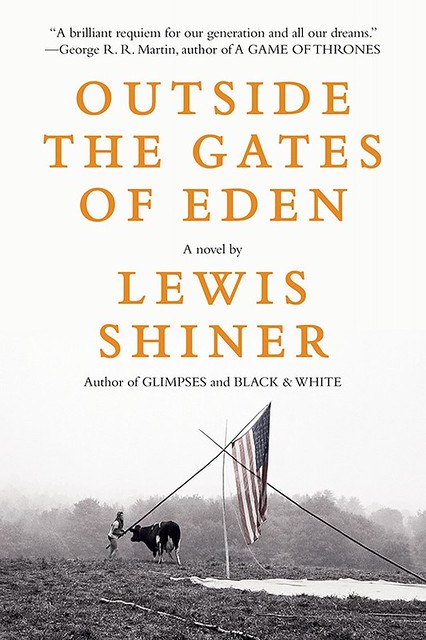 For the novel Outside the Gates of Eden, acclaimed author Lewis Shiner goes back in time, just a bit, to uncover the what it is people of his generational cohort have brought into the present moment.

As I got close to finishing my seventh novel, Dark Tangos, it was time to think about what might be next. I’d just read Anna Karenina for the first time, and it had amped up my literary ambitions. What would Tolstoy write about, I wondered, if he were alive right now? Or, to put it another way, what was the most important conflict of my generation?

The answer came so quickly it was like it had been lying in wait: the death of 1960s idealism and the rise of the culture of greed.

I’d never written a book by starting with a high concept. My previous novels were inspired by historical incidents or particular obsessions of mine, and they usually announced themselves with dialog playing out in my head. Specifics first, generalities later. In this case the idea had such a grip on me that the specifics came tumbling along after it–the main characters, the first scenes, various milestones along the course of what I immediately knew was going to be at least a thousand-page manuscript.

What I didn’t know was why. What happened to our Revolution? To all our revolutions? How did the rich come to own the moral high ground along with all the banks and houses? I hoped the answers would come with the writing.

And if Outside the Gates of Eden does answer those questions, it’s in a novelistic way. Which is to say, I don’t expect readers to extract simple answers and match them to numbered questions printed in the back. Instead I hope that the experience of (re)living those years in the controlled environment of a novel will leave them feeling like maybe they understand something in a visceral way that they didn’t understand before.

What I can offer here are a few core issues that emerged during the writing, compass points that I consulted whenever I found myself asking, “Where am I going with this, again?”

The first thing I figured out about the 1960s was that they fell into the last sweet spot on a graph with two intersecting lines. The first was the rising line of white, middle-class affluence. In practical terms, this meant that for the first time ever, most kids didn’t have to go to work at 16. Instead, millions of them could go to college and ask questions about why things had to be the way they’d always been.

The other line was the descending line of finite resources. Just as those millions of college students were revving up to change the world, the Club of Rome think tank issued a report called The Limits to Growth (1972), which was followed immediately by the 1973 oil crisis, which made it obvious to every automobile owner in the US that there was no longer enough to go around.

Suddenly a lot of people who’d been saying “Love thy neighbor” were saying “Me first.”

Also in 1973, Nixon finally kept his 1968 campaign promise to end the war in Vietnam. The war had been the number-one unifying issue for the counterculture since the mid-sixties. When the troops started coming home, no other cause was universal enough to take its place.

There was more. School busing alienated the working class, both white and black. Stagflation hit everyone in the wallet, and economists couldn’t explain it or fix it. Even as charismatic figures continued to arise on the right–most prominently Ronald Reagan–the left was devastated by the assassinations of Martin Luther King and Bobby Kennedy.

The public attacks on the movement and its leaders were bad enough. Even worse was the FBI’s COINTELPRO, which infiltrated every radical organization from the Students for a Democratic Society to the Black Panthers to the American Indian Movement, disrupting meetings, pushing for increasingly violent and bizarre agendas, creating and widening the fracture lines within the groups.

The lack of leadership was crippling. It’s a sad truth that for every ten protestors at a rally, nine were there mainly in hopes of getting high or getting laid. Keeping the actual idealists motivated and active required a major effort, one the establishment undermined in every way they could.

Television proved their most potent weapon. Over the years, the constant mocking images of flower children and shaggy radicals made sincerity laughable and started us on the path to where we are now, where irony is the dominant cultural mode and “hippie” is just another Halloween costume for sale at Target.

And yet. Despite the odds, despite the defeats, images of the sixties endure. The words “Woodstock Nation” and “Peace and Love” still carry power down through the generations. With Donald Trump acting out the worst of crony capitalism on the daily news feed, more and more people are realizing that community, charity, and conscience really are our only hope for the future. And that is the biggest idea of Outside the Gates of Eden.