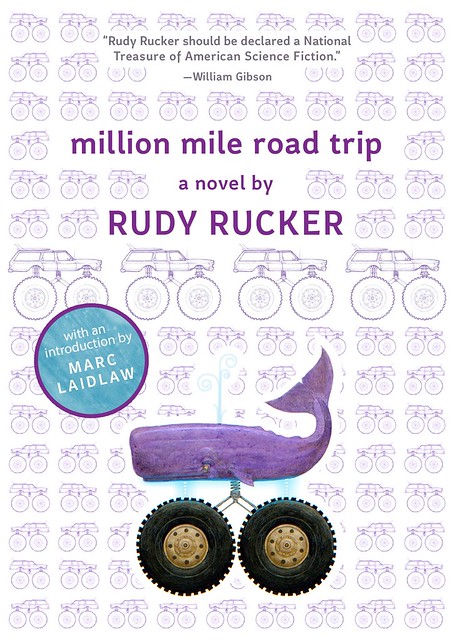 In this Big Idea for Million Mile Road Trip, author Rudy Rucker describes how he wrote himself into a bit of a corner — and what it was that helped him get out of it. His path is not recommended for others, but it makes for some very fine reading here.

I always wanted to write an SF novel about a motley group of characters taking a long journey to visit a lot of planets, some of the travelers human, and some of them alien. To make it more fun, I wanted them to be riding in a car.

Why a car? Well, we already have plenty of SF novels about tourists in spaceliners, emigrants in generation starships, and troops in the space navy. In a car, there’s no captain, and you can ride with the windows open, and you stop wherever you like.

Real-life road trips end before you want them to. You run into a coastline. The road stops. I wanted a road trip that goes on and on, with ever new adventures, and with opportunities to reach terrain never tread upon before. But how to do that in a car?

I peeled Earth like a grape, snipped out the oceans, shaped the flattened skin into a disk, and put a mountain range around it. Then I laid down a bunch more of these planetary rinds, arranging them like hexagonal tiles on a very wide-ranging floor. All set for a Million Mile Road Trip.

How did I decide on a million miles? Well, the edited-down Earth disk has a diameter of about ten thousand miles. And if we’re generous and say our roadtrip will run across about a hundred similar planet-like disks—then we’ve got a million miles. 100 × 10,000 is 1,000,000. Nice and tidy.

By the time I was two-thirds done with my novel I realized I’d only traveled through six worlds. I needed to pick up the pace. The acceleration part was easy. I introduced an invented-on-the-spot SF technology that I called stratocasting (for the Fender guitar). The hard part was actually imagining a whole lot of worlds. I figured describing thirty of them would be enough, and the rest could be a blur. But I was having trouble getting thirty unique worlds together.

At this point, in January 2016, real life intervened. I had to go into the hospital for an especially traumatic hip operation.

After the operation, I woke, soaked in sweat, in a state of delirium at half-past midnight. My bed seemed like the edge of an alleyway, and I was like a wet rag of clothing lying there, a wadded shirt. A nothing. Pathetic. Lost. Undone.

I was unable to remember who I was, or where, or what my significance was, or what ordeal I was undergoing, or what I was supposed to do. A wet crooked rag in an alleyway. Eventually I found the ringer-button to call a nurse. She was sympathetic.

And then, on the table by my bed, I spotted the paper scrap with my marked-up draft of the “Stratocast” chapter for Million Mile Road Trip. Ah, yes. I told the nurse I was a writer, and that the scrap was from a science fiction novel I was working on, and  that I would now try to recover my personality by thinking about my book. She approved.

I had all the time in the world, anonymous in the middle of a hospital night. I set to work, typing till 3 am. I was happy to be writing in such an extreme situation. I ran my characters across twenty or thirty planet-sized basins in a single chapter. A surreal mural in my mind.

That hospital experience reminds me of a sentence in a short story, “Miss Mouse and the Fourth Dimension,” written by Robert Sheckley, the SF-writer-hero of my youth, and later my mentor. He was a wise, hip guy, and deeply funny to boot. Here’s Sheckley’s line: “A genuine writer is a person who will descend voluntarily into the flaming pits of hell for all eternity, as long as they’re allowed to record their impressions and send them back to Earth for publication.”

I always think a lot about what I’m writing. I’m a perfectionist. On the days when I can’t get anywhere on my current novel, I work on my notes for it, thinking about my world and about the invented logical explanation behind it. It’s a dialectical process. The thesis is the fantastic vision, the antithesis is the pseudoscientific explanation, the synthesis is ramifying linkage between the two, and the process is the the act of shuttling back and forth, repeatedly adding to the vision and the theory.

Of course, Million Mile Road Trip is no ponderous work of phenomenology. It’s light and playful. The heroes are three high-school kids with bad attitudes. And the aliens they encounter are, to say the least, flaky.

Another element that influenced my composition is the style of Thomas Pynchon. I wanted to write a novel in the present tense like he does. Often readers don’t consciously notice what tense a novel is written in—like, is it past or present? But for writers it’s a fraught decision. I found that using the present tense gives a chatty feel, like someone recounting a tale. Another Pynchon move is to rotate the point of view from chapter to chapter. And he writes very close-up to the current point-of-view character, producing an effect like a real-time stream of consciousness.

Regarding locale, I like to fold my real surroundings into my SF novels—it’s what I call transrealism. SF that’s set in the real world.

This time around, my transreal world includes flying saucers—and they’re not boring machines, no, they’re live beings made of meat. The aliens don’t ride in flying saucers, dude, they are flying saucers. (I don’t understand why more people don’t realize this!) Be that as it may, you can’t really have flying saucers in a novel without a full-on Attack of the Flying Saucers. And what better setting for such a scene than—the annual graduation at our local Los Gatos High School! I’ve been to quite a few graduations there.

It’s all here. Check it out.