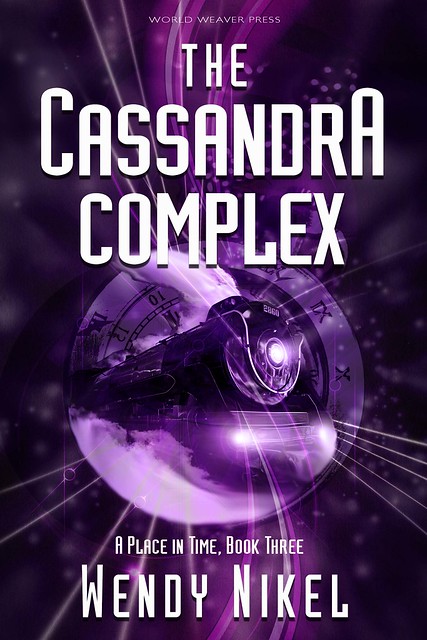 If you’re a time traveler, keeping the time stream clear of possible contradictions is not your only problem. Author Wendy Nikel knows another one, and it’s at the heart of The Cassandra Complex.

In my previous Big Idea entry, I talked about The Grandmother Paradox and how the title of that second book in my Place in Time novella series just seemed to fit perfectly from the very beginning. When it came time to write the third book, though, (which follows 18 years after the events of the second book but can be read as a standalone) The Cassandra Complex wasn’t the first title I had in mind.

When looking at where the characters in the first two books had been and how I’d used the different aspects of time travel to shape their stories to this point, I had a couple “big ideas” in mind.

First, I knew that based on how book two ended, I had to send my new protagonist back in time from her home in the 22nd century to live in the early 20th century in order to keep the timeline straight. I also knew that both protagonists from the previous books had been striving to preserve the established timeline, so for this one, I wanted to do something different. The main character of this book is younger and less experienced in time travel than the previous ones, and it shows. She’s got her own ideas about what the past should look like and isn’t likely to listen to anyone else’s advice – especially that of her parents or older brother. Thus, instead of keeping her head down and keeping the timeline intact, this latest time traveler in the series sets out to make some important changes.

The working title I used for this manuscript was The Compossibility Theory. Compossibility refers to whether two things can exist or happen together, and I’d initially set out to discover whether my main character could change the past without changing so much that she’d cease to exist. Depending on which theory of time travel you subscribe to, this had the potential to create an alternate universe or could cause a reality-destroying paradox. But as I started plotting and writing and putting together her adventures in the past, my protagonist ran into a problem that I wasn’t entirely expecting – a problem which changed the story’s trajectory and, eventually, the title as well.

No one believed her.

And who could blame them? Any time traveler is going to have a hard time convincing people that they’re from the future, and in the year 1914, an 18-year-old girl wasn’t likely to be taken seriously about anything – much less the existence of time travel and warnings about the future. Thus, I had a new problem for my main character to solve – one that lands her in quite a bit of trouble.

That left only the problem of the title. The Compossibility Theory didn’t fit so well anymore now that my Big Idea had taken me in a different direction than I’d anticipated. So I turned to the past for my inspiration.

In Greek mythology, Cassandra was a Trojan princess. She was given the gift of prophecy by her admirer, Apollo, but then when she refused his advances, he cursed her so that no one would ever believe any of her prophecies – including ones regarding the destruction of Troy. Today, a “Cassandra complex” refers to when someone’s valid warnings or concerns are dismissed, which is exactly the sort of struggle my main character is up against. One quick name change, and I had the perfect title to a story all about a time traveler trying to make her voice heard.

← Spice, Mid-Yawn
My Birthday Challenge: Donate to Wipe Out Medical Debt, Get a Brand New Story →