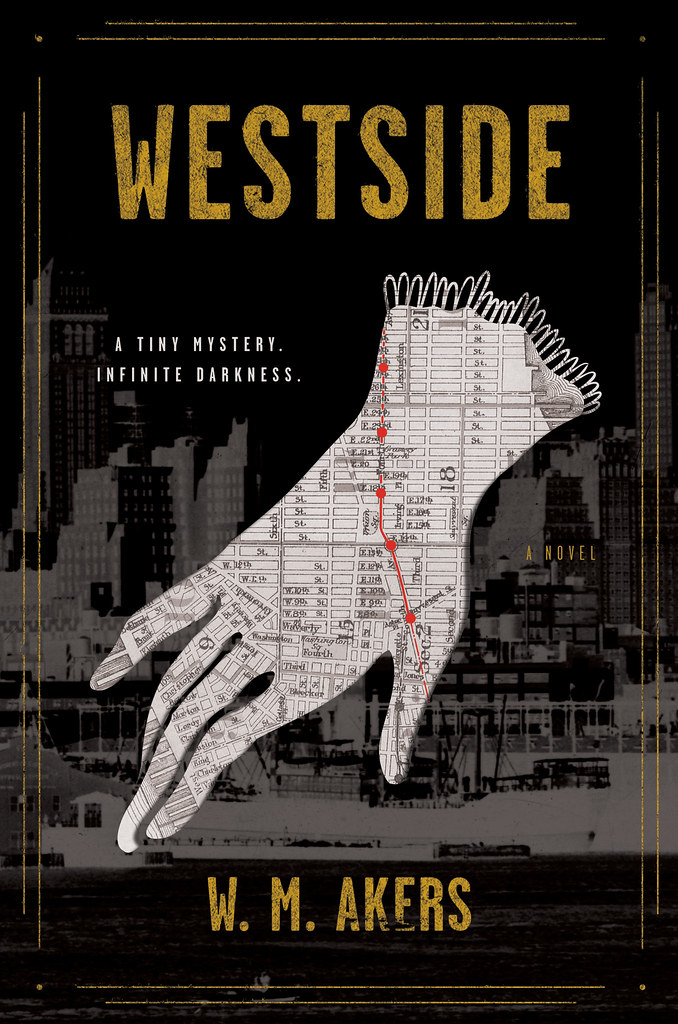 In novels, detectives follow the “big cases” — but what about the other cases, which need solving? W.M. Akers considers them, and the person who would chase those down, in Westside.

You will probably never solve a murder mystery. You will probably never personally investigate arson, a hit-and-run, a kidnapping, a bomb threat, insurance fraud, an assassination, or any of the other thrilling crimes that preoccupy most fictional detectives. You are a real person, and though the mysteries of your life are never a matter of life and death, they often feel that way.

That’s what tiny mysteries are all about.

I created Gilda Carr, the hero of Westside, because I wanted to give tiny mysteries their due.

Gilda lives in a twisted version of 1921 Manhattan, in which forces unknown have caused the disappearance of thousands of citizens living west of Broadway. Blocked off from the rest of the city by a massive fence, Gilda’s Westside is overgrown, empty, and bizarre. It is a neighborhood teeming with huge questions, and she has decided to answer none of them.

Her reluctance is a correction to the excesses of her father, a former cop whose obsessive chasing of the city’s largest mysteries ended his career and broke his spirit. To avoid his fate, Gilda chases bits of lost clothing and meaningless personal effects, solving the niggling questions that keep us up at night, no matter how pointless we know they are.

A detective preoccupied with tiny mysteries is something that first came to me after I lost a book. It was, appropriately enough, a book about writing mysteries—a rather good collection of essays edited by Sue Grafton that I checked out from the Brooklyn Library, read a few words of, and lost almost immediately.

It took me some time to realize it was gone. I didn’t see it for a week or two and thought nothing of it. In an apartment like ours, which crams six bookshelves into three rooms and features countless piles of half-read books and unwanted papers, objects tend to wander away and come back of their own accord. When the loan came due, I launched a half-hearted search. On finding that the book wasn’t anywhere within arm’s reach, I renewed the loan and spent another couple of weeks not wondering where it had gone.

This went on for over a year.

Every time the loan came due, I combed the apartment in search of Writing Mysteries, checking over the same six shelves, the same two desks, the same piles of junk, and finding, again, that it was nowhere at all. I kept renewing it—if no one places a hold on a book, you can renew it endlessly—feeling so guilty about my deception that an automated email from the Brooklyn Public Library was enough to make me feel ill. As the year wore on, my searches grew more frantic, until I found myself rooting through kitchen cabinets, looking under furniture, and going through old suitcases in search of a book I’d barely read.

Finally, paranoia took over. Heeding Sherlock Holmes, I decided that the improbable must be the truth: I hadn’t lost the book. The library had. Although I had no memory of doing so, I suddenly and desperately believed that I must have returned the book at some point, only to be thwarted by some filing error that marked it still checked out.

I took this theory to one of the endlessly patient librarians at the Central Branch. They politely explained that what I’d imagined was impossible, and told me that I would have to pay an $84 fine to make up for the loss of the book. I decided $84 was worth it to be rid of the stress, apologized to the librarian, and ponied up, happy that, at last, I could forget the mystery.

And then my brother-in-law threw a bottle of detergent into our storage closet.

My wife and I came home from a trip and found the entire apartment polluted by a horrible chemical smell that my brother-in-law claimed he hadn’t noticed. The source was the far reaches of the closet, where he had celebrated the completion of his laundry by hurling an entire handle of detergent, which had leaked all over the wall, the floor, and everything else in its path, destroying several cubic feet of the unwanted junk that filled our closet to the brim.

As we threw out three trash bags of stuff we should have gotten rid of years before, I felt the same relief that I had when I paid off the library fine for the missing Mysteries. When you have been carrying around something useless and awful for a long time, it is beautiful to simply chuck it. And with that happy thought, I reached the bottom of the pile of newly-minted trash, and saw Sue Grafton’s name.

These are the kinds of mysteries I created Gilda Carr to solve: the kinds of questions, like, “Where the hell did I leave that book?!” that are totally unimportant and yet have the power to get under our skin. She lets the other detectives take the big cases. It’s the tiny ones, she thinks, that matter most of all.

I have absolutely no idea how that book ended up in the back of our closet, piled under so much junk that the detergent couldn’t reach it. But I kept the book—it cost me $84, after all—and put it on a high shelf as a reminder to be more careful with books borrowed from the library.

At least, I think I put it there. I haven’t seen it in a while.