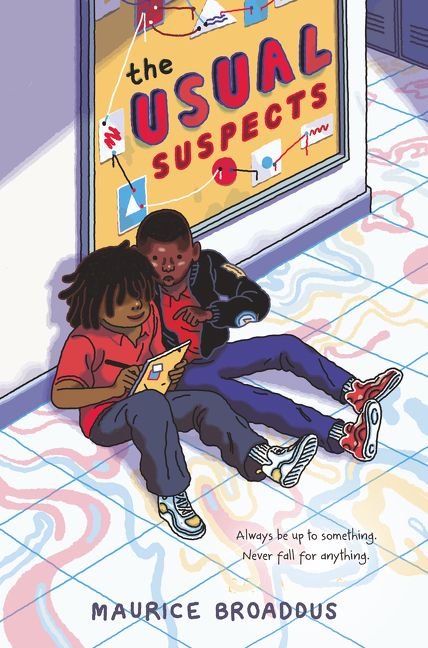 Honestly, Maurice Broaddus had me as a reader of The Usual Suspects when he described it as “Encyclopedia Brown meets The Wire,” but as this Big Idea shows, there’s so much more going on here.

The Usual Suspects is a bit of a departure for me. It’s a middle school detective novel (think “Elmore Leonard for kids” or, as it was pitched, “Encyclopedia Brown meets The Wire”), because I work a lot with children who want to read what I write and, frankly, most of my stuff isn’t “age inappropriate.” In fact, I originally wrote the book to both entertain my oldest son and chronicle some of my children’s antics (it’s the only thing of mine he’s read and he still refers to himself as my original editor). The premise of the story is The Big Idea: when something goes wrong in the school, they round up The Usual Suspects.

Fun fact: I have always shadowed my children through school as a substitute teacher, as sort of a backup for both my children and the staff. When I wasn’t working in either of my sons’ classrooms, I volunteered for a class the school referred to as “Special ED.” That was where they corralled the children with “emotional dysfunction.” Other words that could be used to describe the room include: quarantined, warehoused, or otherwise isolated from their classmates as someone else’s problem.

What I learned was how easy it was to get trapped in a story that follows you. How going through life under the constant haze of suspicion conditions people. But also, that those boys were amazing. They weren’t saints and they got up to some chuckle-headed nonsense, but they were smart, easily bored, and talented, yet as early as fifth grade, the system was letting them know it was giving up on them. They inspired this story, because being considered “usual suspects” was far too many of our everyday lived experience.

The Usual Suspects explores what it means to be a young black boy caught up in the system. To be dealt with under what Thelonius explains in the book as “the spider syndrome”: “when people see a spider, their eyes light up and their heart races because they’re scared. They’re so panicked that they forget that the thing that’s terrifying them is often like one hundred times smaller than them. All they know is all of the bad stories they hear about them, how deadly a bit from one of them can be even though that only applies to a small fraction of them. Spiders look strange to them, different and ugly. Their ways confuse and alarm people like them, the way they skitter across a room, lower themselves on a strand when they don’t expect them, how they leave messy webs wherever they go. So when a person sees one, they’re conditioned to smash it. It’s easy to believe bad stories and let them color how you see things.”

My favorite line from the (starred!) Kirkus review: “Readers will love watching these two uniquely gifted black boys explore the complicated tensions between impulses and choices, independence and support, turnin’ up and getting through.”

Every year I have a new Thelonius and a new Nehemiah to work with (fun fact: when the cover was revealed, one of my current students shaved his head because he was a dead ringer for Thelonius…in more ways than one). Also, I look at my own sons. My job as a parent is to help them learn how best to navigate their way through the world (on their terms). Their fingerprints are all over this book. And my life. And I wouldn’t have it any other way.