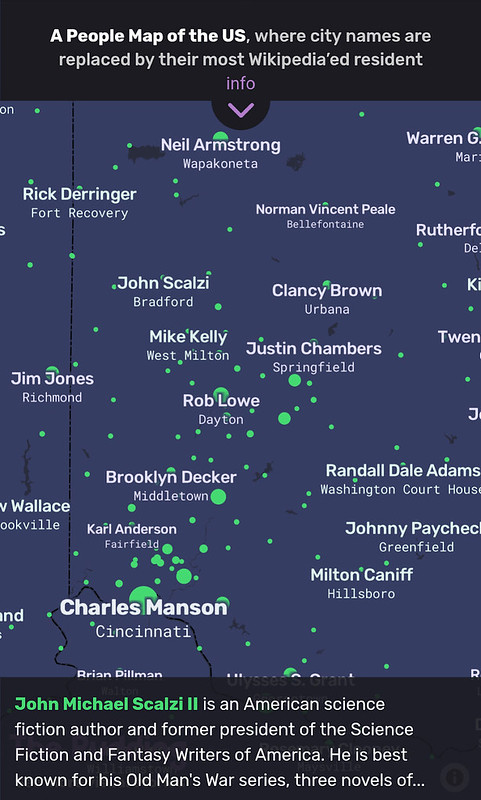 There’s a site out there that scraped Wikipedia entries from the last few years, and then put up a map of the United States where the place names were replaced with the person associated with that place (in apparently whatever capacity) whose Wikipedia article was looked at the most. For Bradford, Ohio, and perhaps not entirely surprisingly, that person happens to be… me. Yes, that’s correct, on this map, I live in me.

I say “perhaps not entirely surprisingly” not because I am in fact hugely notable but a) because the set of people associated with Bradford, Ohio who also have Wikipedia pages is small, comprising as it does of six people, only two of whom, including me, are still alive, and b) of the six of us, I’m the only one with a significant online footprint, and who is still active in the field for which he is notable. I do wonder who came in second, however. In any event, the competition for “the most wikipedia’d person” is much less fierce in Bradford, Ohio, population 1,800, mostly farmers and blue collar folks, than, say, Chicago, or even Dayton.

The map renames also tell you a little about general Wikipedia browsing habits, since there’s a statistically high preponderance of serial killers (see Cincinnati’s new name on the map) and celebrities, and not necessarily the ones you would expect, which is why Boston, as an example, is currently named “John Cena.” Clearly Wikipedia readings tilt toward currently living and currently famous people. Also some folks have more than one city named for them. Stephen King is all over Maine, for example, which is not a surprise, but he’s also the new name for Fort Wayne, Indiana. Apparently he lived there briefly as a child. He’s also the new name for Sarasota, Florida. Pick a state, Steve.

Finally, some people are not where you would expect them to be. Max Yasgur, upon whose farm the Woodstock music festival was held, is neither the new name for Woodstock nor Bethel, New York, but the former Marathon, Floria (and who is the new Woodstock? David Bowie. Who was not at Woodstock! Go figure).

Aside from me I was amused to see a few cities renamed for friends: Sandra Lee (aka “Dr. Pimple Popper”), who I went to school with, gets a city, as do Wil Wheaton, Dan Wells, Brandon Sanderson and Neil Gaiman. I suspect there may be more, but the site is not searchable so finding them is not easy unless you already know where to look.

In the meantime, I’m happy living in me, existentially and otherwise.