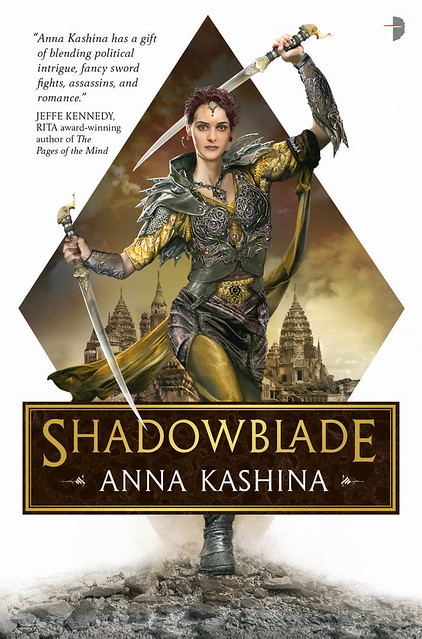 In today’s Big Idea for her novel Shadowblade, author Anna Kashina reminds us that behind all the swashbuckling, there’s often a serious purpose.

During my Shadowblade blog tour, I have written several posts emphasizing the fun I had writing this novel, and I hope that readers picking up this book will experience the same fun. There is indeed a lot of fun elements in the story that made this book a pleasure to work on, including the blade fights, characters, politics, and of course, the romance.

But let me get serious for a moment.

Shadowblade is a story of a young orphan girl with uncertain heritage, Naia, growing up in the Jaihar Order that trains elite blademasters for the Empire. The Jaihar pride themselves on treating both genders equally, especially in their advanced training. But to get to that level Naia must first pass the lower grounds, dominated by drill masters whose role is to initiate young trainees into the Jaihar ways. Here, bullying is a norm, and incidentally all the superiors somehow tend to be male… Is it beginning to resemble any familiar situations?

Studies show that in male-dominated environments, girls and young women tend to experience subtle but very effective forms of bullying that target, and often destroy, their self-esteem. Fighting for emotional dominance, their peers often label them as incompetent, or negative. This is especially hard to deal with because a lot of this behavior is subconscious, based on such deep stereotypes that neither the bully nor the victim tend to realize them. For someone in training, these issues can permanently affect their future. Naia, a young and attractive girl whose major talent involves weapons, has to fight her way through all this, for a chance to rise to the top.

My big idea behind this book is perseverance. It’s the story of a person who doesn’t give up, no matter what the odds are. It’s about those people around her who recognize this, and help her break through all the stereotypes and bad attitude to come out as a winner. Naia’s life is threaded with challenges, all the way up. First as a trainee, where she has to find her way out of very deep trouble and face different tests at each level of her training. And then as a warrior, whose unprecedented assignment plunges her straight into the grinder of the imperial politics, with a low chance of survival and a very large target on her back.

Perseverance has been very important in my own life and career. It’s definitely the only thing that carried me through to where I am today. When I wrote this book, Naia continued to surprise me. She tackled her challenges in ways I never would have thought of – or so it seemed to me. Getting to know her enriched me as a person. I don’t believe that I’m anything like her, really, but I can relate to her in so many ways. I’ve learned things from her that I never expected to.

Layered underneath all the fun – the glittering medieval setting of a rich Middle Eastern empire, the highly technical blade fights, the food, the romance – this big idea is what drove the story for me.