I agreed to do a 5k run with my friend later this year. I made clear to them that I couldn’t promise I wouldn’t vomit at, like, mile three, but they were undeterred. It’s a few months away so I have time to prepare, at least.

Honestly who am I and what have I done with me these days. 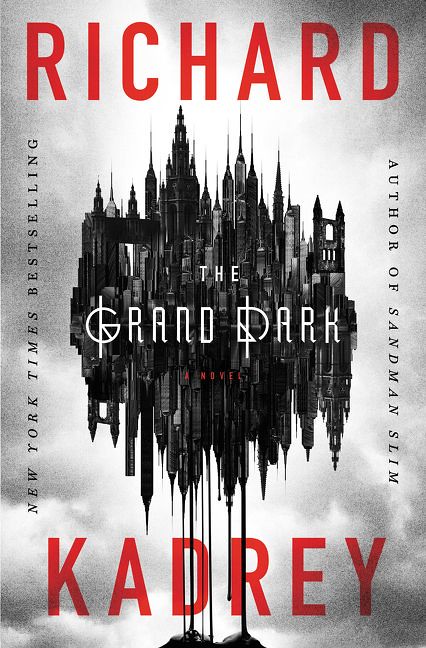 In his new novel The Grand Dark, author Richard Kadrey takes a bit of swerve — and creates a world both like and unlike our own, in a particular time, and in a particular place.

I’ve been thinking about The Grand Dark for a long time. Years, in fact. But I couldn’t figure out how to write it. Then, like a lot of my books, the opening just appeared in my head. Stories do that sometimes. I beat my face against the keyboard for days and then—pop!—the whole thing is there. I knew the story was going to get deeply weird, but I didn’t want to jump right into it. So, the book opens with a quiet bike ride through a waking city at dawn. That’s it. Just a guy on a bike.

Of course, the ride isn’t really ordinary. Our young hero, Largo, rides across a bridge that could easily be in 1920s Berlin or Prague, except for the robots. Little food delivery ones and Black Widows—huge spidery bots delivering steel and machine parts to the nearby armaments factory. While stopped at a street light, Largo sees a little delivery bot crushed under the treads of a military vehicle. This should be his first clue that the day isn’t going to go well but, of course, it isn’t.

Most of my books have been set in L.A. or San Francisco. But for The Grand Dark, I wanted to create a world that was completely mine, the way writers such as M. John Harrison created Viriconium and China Mieville created New Crobuzon. In that spirit, I invented Lower Proszawa. I’d been fascinated by the Weimar period in Germany between the First and Second World Wars, so that became the basis for the city.

Lower Proszawa is the somewhat rundown sister city to High Proszawa in the north. But the High City isn’t really there anymore. It was virtually destroyed during the Great War. As the story opens, it’s an uninhabitable ruin of shattered buildings, unexploded ordnance, and plague bombs. Those with the means had escaped the High City at the first hints of war. Now the two populations co-exist in a kind of liminal state made frantic by the knowledge that the Great War hadn’t settled anything and that another war is just over the horizon. And what do you do when you know the world is ending? You party.

There are drugs, sex, and entertainment of every sort in Lower Proszawa. The book revolves around the Theater of the Grand Darkness, a kind of Gran Guignol palace that stages the most gruesome murders imaginable twice a night. The actors are life-size electric puppets brought to life by actors backstage wrapped in metal galvanic suits. My puppet theater was inspired by the work of the brilliant animators, the Brothers Quay, whose The Street of Crocodiles made me wonder what it would be like to put people into their dark and fantastic worlds.

The book’s protagonist, Largo, spends a lot of time at the theater because his lover, Remy, is one of The Grand Dark’s rising stars. With her, Largo’s life seems great. He has a beautiful girlfriend. His job as a bike courier doesn’t pay much, but it’s easy. And, then there’s all the drugs and sex. Plus robots, which Largo hates because they’re taking jobs from humans, and genetically engineered Chimera pets, which Largo longs to create himself.

In a lot of ways, Largo is different from any protagonist I’ve written before. Most of my main characters are powerful and driven. Largo is a twenty-one-year-old innocent, in the sense that he thinks he knows how the world works, but has no real idea what he’s talking about. He’s also scared. He grew up in the slums of Haxan Green, saw his father and best friend murdered there, and is constantly afraid of screwing up enough to lose everything and end up back there. Because of his fear, he becomes the perfect pawn for forces that want to either destroy Lower Proszawa or transform it into something truly awful. This begins with the disappearance and possible murder of Remy. From there, his life takes a series of dark and surreal turns that lead from parties at millionaires’ mansions to the plague pits in the north.

I’m not going to lie to you. The book might have been different—lighter and more amusingly fantastical—if I’d written it at a different moment in history. But the real world always creeps into our work, even if we’re writing about L.A., Mars, or an entirely fictional city. We all live between Great Wars, whether they’re the kind with guns or our everyday struggles to live, create and be at least a little happy in a global shitstorm.

Most of all, though, The Grand Dark is a strange adventure story. You’ll find secret police, strange airborne maladies, carnivals full of the most fantastic Chimeras, clandestine submarine bases, revolutionaries, and weird weapons the world hasn’t seen before. But if you really want the elevator pitch, here it is: The Grand Dark is about a young man and his lover having wine and cocaine at a 1920s Berlin café run by robots and scarred war veterans at the end of the world. Or, at least, the beginning of a new one.

I think it’s the best thing I’ve written. I hope you enjoy it.