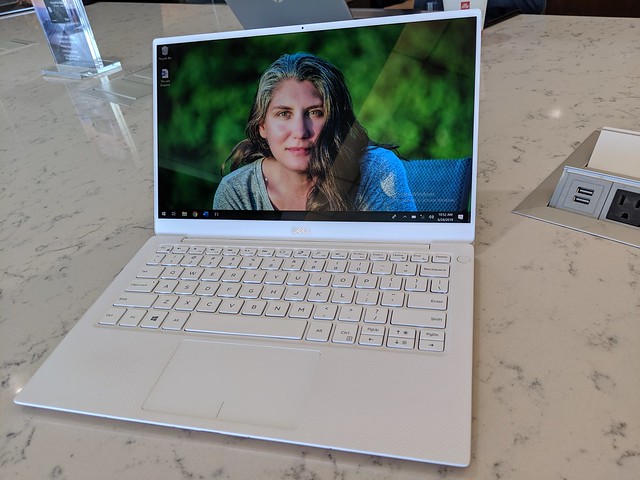 It turns out as much as I love my PixelBook — and I do — when it comes to writing long-form documents while travel, Google Docs still chokes on large files, and both the Web and Android app versions of Word are really really bad for my particular writing workflow (it’s because they’re terrible). Plus while I generally like the Android app versions of things like Photoshop, it’s also nice to have the full-featured versions when I’m on the road. What I’m saying is that I’ve talked myself into buying a new Windows laptop, and this is it: A Dell XPS 13, the recently-refreshed 2019 edition.

My very early take (as in, I’ve had it less than a day) is that a) it’s tiny as hell and also pretty, which I like, b) it’s very powerful for size and profile, c) the keyboard is nice and clicky, and the screen is kind of ridiculous (it’s 4k, which is hella overkill on a 13-inch screen) and d) Windows is still a bit of a pain in the ass and if I didn’t really just need the full-sized Word in order to write I would happily never use it again on a laptop. One of the reasons I love my PixelBook is that on an OS level it just works for laptops and doesn’t leave me waiting for anything. If Google Docs would just stop choking on any file over 15k words, I’d never look back.

(Incidentally, this is not your cue to tell me about your favorite alternate word processor and/or suggest I go over to a Mac or Linux or whatever. I use the tools I use because those are the tools that work for me, folks. Just be glad that I don’t have, like, WordStar 3.1 as my favorite word processing tool, like George RR Martin does. Say what you will about Microsoft Word, at least it is readily available.)

This is the second Dell laptop I’ve owned; the first was the XPS 12 2-in-1, which I got about five years ago. It had a tablet mode which one activated literally by flipping the screen around, which was a neat bit of engineering but ultimately not especially practical; I only ended up doing that a couple of times. There’s an XPS 13 2-in-1 as well, but in general I’ve found that turning one’s laptop into a tablet is generally better in theory than in execution — my PixelBook is also a 2-in-1 and I use the tablet mode rarely if at all. I don’t think I’ll miss flipping this one around. And if I need to flip around my laptop, well, I still have my PixelBook.

I should also note that this doesn’t mean that I’ve entirely abandoned my PixelBook, which again I love and consider probably the best single laptop I’ve ever had. It’s going to find use during the times where I’m not actively working on a novel, and also around the house when I’m just casually looking at things online (which is, uhhhhh, a lot). But this Dell is my new workhorse for when I travel, which is, these days a lot. I expect a lot of the next novel will be written on it. And probably the one after that. And possibly the one after that, too.