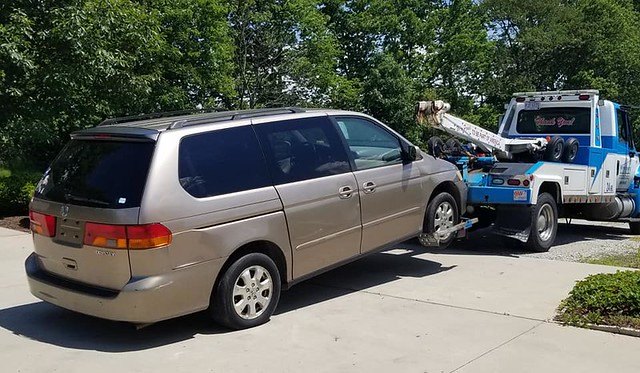 Spare a moment, if you will, to think upon our 2003 Honda Odyssey minivan, which today, after sixteen years and over 200,000 miles, was towed away by a local charity to an unknown destination and future. The minivan has for the last few years been the daily driver for Athena, who took it to school with her and ferried around her friends and their stuff. But before that it was the family minivan, in which we carried kid, dogs, groceries and so on and so forth, as one does with minivans.

I should note that I didn’t want the minivan. When we went car shopping in 2003 (after my previous car, a 1989 Ford Escort, went belly up), I was looking at the then-new-to-the-scene Honda Element, which I thought was a pretty cool like pseudo-SUV. However, Krissy was indifferent to that car, so the salesman showed us a minivan, and by the time he got to the hideaway third row of seats, Krissy was sold. I accepted the inevitable, on the condition that we got personalized plates that read “NOT COOL,” because if you drove around in a minivan, any coolness you ever had goes out the window.

And as it turns out, “minivan for coolness” was a pretty good trade. The dirty secret of minivans is that they are generally comfortable, safe and useful cars. We were the ones toting friends when it came to go out to restaurants, and the ones who got called for loads that were too large for cars but too small for trucks; we could carry pretty much anyone or anything. And it turns out that Honda Odysseys are incredibly easy to maintain; I can’t really recall any particular trouble we ever had with it.

Be that as it may, sixteen years and 200,000 miles will take its toll, and the minivan was pretty much at the end of its useful life for us. We got Athena a used GMC Terrain to take her where she wants to go, and called up a local charity to come take away the minivan. I don’t know what they’ll do with it, but I like to think they might fix it up a little and give it to a family who could use it for at least a few more years. It served us well; it’d be nice if it could do the same for someone else.

So, farewell to the Not Cool minivan. It wasn’t cool, but it was good. It will be missed.