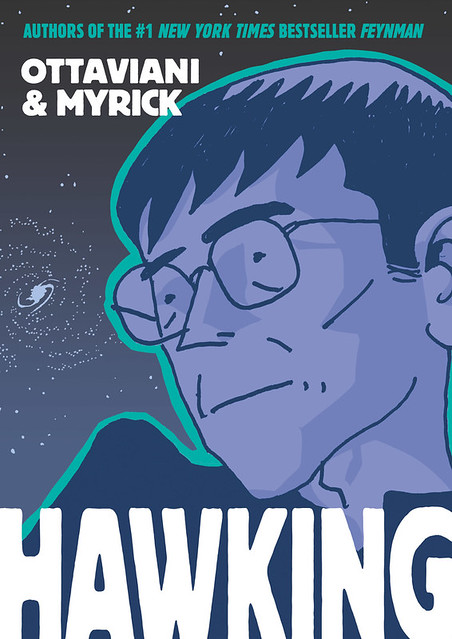 It’s not every day that you get invited to meet one of your heroes. In this Big Idea for Hawking, author Jim Ottaviani talks about planning to meet a man he and the book’s artist Leland Meyrick absolutely admired… and how things didn’t quite go to plan.

With a few exceptions — Armstrong and Aldrin, Goodall and Galdikas — for most of my graphic novels I’ve been “Sixth Sense”ing it, so to speak, as my subjects have all been dead. And as it turns out, writing about the living is different.

Exhibit A: In 2013 Leland Myrick and I ended up taking reference photos and discussing his life story while standing in Stephen Hawking’s bedroom and private bath — okay, we didn’t hang out in the bathroom for long — and yet we didn’t meet him face-to-face. Here’s what happened.

It started with two words: “big day.” That’s the subject line of the message I received on July 4, 2012. No capitalization, no punctuation, no elaboration. The message came from Lois, a mutual friend of Hawking’s, and she sent it to let me know that her husband Gordy had won his bet with Hawking on the existence of the Higgs Boson… and oh, by the way, in addition to conceding that wager? Hawking had also let her know that he enjoyed the Feynman graphic novel Leland and I did, and invited us to come and visit to talk about doing one on him.

So, I maybe would have capitalized those two words, because it was a Big Day for Leland and me, and since then I don’t think there’s been a Single Day he and I haven’t thought about the book, worked on the book, and looked forward to the day when you’d have the book in your hands.

An invitation from Stephen Hawking means you start making travel plans immediately, but finding the right time to fly over and meet him proved difficult. As one of the few true celebrity scientists in the known galaxy, he was always busy. And as everyone knows, he had physical challenges beyond what you’d expect for someone in their seventies. In the end we just had to commit to a date to visit and hope for the best, and in the end we were unlucky.

He wasn’t feeling well the whole time we were there, but he got better and we got five more years of his grand pronouncements and his sly wit, but for us the trip ended up being very Gay Talese, very “Frank Sinatra Has a Cold.” By that I mean we didn’t talk to the man himself, but instead spent our time with the many people in his close orbit at Cambridge. (If you need an SF hook to get you to read Talese’s classic article from Esquire, note that it features a cameo by none other than Harlan Ellison, definitely playing himself.)

So we spent time in his office with his colleagues, in his home with his personal assistant, in and around the Department of Applied Mathematics and Theoretical Physics and the Gordon Moore Library with his personal papers, and left with more material and insights than we could ever have gotten from a short audience with the man himself…an audience that would have ended with washed away in the turbulent wake of activity that followed him everywhere he went, every word he spoke.

That doesn’t mean we don’t regret not meeting him. We did, and do. But it also doesn’t mean our book doesn’t show Hawking’s personal side as well as his science. It does, and for a couple Midwesterners (Leland now lives on the west coast, and I was born out there, but we both spent our formative years in middle states) the idea of going into someone’s bedroom with a purpose other than to toss your winter coat on top of the pile and immediately leave without looking at anything at all — much less taking photos — was, well, plenty personal!

Hawking is about more than his genius, and more than just him, so the iconic wheelchair and computer-generated voice you know so well don’t appear until halfway through this story. Don’t worry. They’re there, along with his friends and family and the science he did and the bets he won (and lost) and how he made the most of the two years his doctor predicted he had to live after his ALS diagnosis.

He died around the fifty-fifth anniversary of that prediction, after an eventful life that took him all over the world (literally) and throughout the cosmos (figuratively). In our book you’ll travel with him through both.

For myself, I would have guessed he’d be with us even longer. In fact, in our original pitch to First Second, we closed by saying “Producing a graphic novel of this scope will take years, but if I had to bet, I’d bet that Hawking will be around to see its completion.” I was right about the ‘tak[ing] years’ part, but though it was a close thing, sadly, I was wrong about him being around today.

But even though he’s gone, through Leland’s art you can still hear that voice, and see that grin.