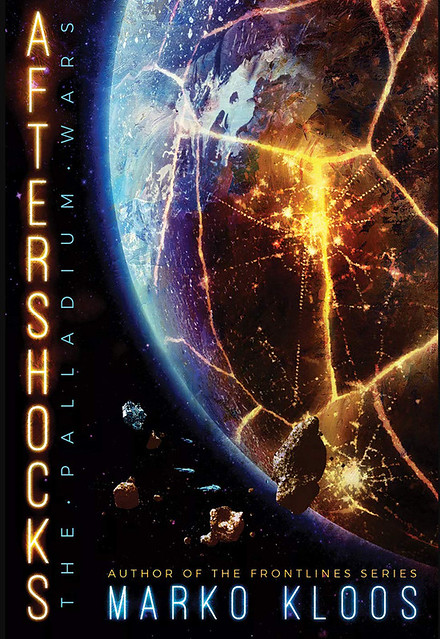 Military science fiction is a popular genre, and certainly Marko Kloos knows that, having written the very successful “Frontlines” series. But for his new series, which begins with Aftershocks, Kloos decided he wanted to try a different strategy, regarding “MilSF.” Here he is to explain it. Giraffes may be involved.

A good friend once told me that people who go to the zoo come in only two kinds: those who are happy to see the giraffes again, and those who aren’t. Military science fiction is very much a genre for readers who like to see the giraffes again. They know it’s going to be about war because it says so right on the tin. And there are plenty of military SF writers providing the metaphorical giraffes: armored space marines, bravery, sacrifice, and jingoistic gun fetish baloney.

But the best novels in the genre were written by people who used the medium of speculative fiction to work out their wartime experiences. Jerry Pournelle and Gene Wolfe served in Korea. Joe Haldeman and David Drake are Vietnam veterans, as is Elizabeth Ann Scarborough, whose Nebula-winning “The Healer’s War” was based on her experiences as a combat nurse in Vietnam. Not coincidentally, military SF is where some of the most authentic and honest war narratives can be found. Writers like Haldeman will let you look at the giraffes only very briefly as they speed-walk you past the exhibit to more interesting sights.

I am fortunate enough to lack wartime experiences to work out in my fiction. I did serve, but in a peacetime army, training for a war that luckily never came. When I wrote the first book in my Frontlines series, I wanted to have a way to use the memories from my service before they faded from memory. Frontlines takes some good looks at the effects of war on the people we send to fight them, but mostly it’s still a “young man goes to war” narrative, with the genre-obligatory boot camp sequence and dramatic space battles. It’s not the giraffe exhibit, but it’s a bit giraffe-adjacent at times. For my new series, I wanted to take a conscious detour around that place from the start.

When I came up with the idea for a new book a while back, I tried to imagine what the exact negative of the “young man goes to war” scenario could look like. I landed at “old(er) man comes home from war.” And that made me think of a bit of family history, and the only person I knew as a child who had come home from war.

You see, my grandfather fought in a war, and he fought for the wrong side.

It wasn’t just the wrong side in a winner-rewrites-history, Richard III sort of wrong. His side wasn’t just wrong, they were unequivocally the bad guys, and history is pretty unanimous about it.

I couldn’t tell you what he did in the war because he never talked about it. When I was little, I asked him a few times what it was like, but he always deflected the question and moved on to a different subject. I know from the family records I kept that he wasn’t what military people call a trigger-puller, a soldier in a combat function. He was a stoker on military trains, which means he shoveled coal into boilers. But his theater of operations was the Eastern Front, which saw the most ferocious fighting and the worst atrocities of the war. Millions died on both sides. It was savage, no-quarter-given brutality. I can only imagine the kinds of things he saw. But he kept his memories locked up for the rest of his life, so I’ll never know for sure. Was he trying to forget? Was he ashamed of the cause he had supported? What did the world look like to him when he came home? How did he even begin to rebuild his life after losing his old one so completely?

And just like that, I had my Big Idea for the new novel.

What if you fought on the wrong side, and you lost?

Watching people pick up the pieces seemed much more interesting than watching them kick those pieces over. So much war fiction deals with the war itself, but what happens when the guns fall silent, and everybody tries to go on with life?

I started to imagine a place where the war has already happened, and where people are still dealing with the aftermath, sweeping up the broken bits and patching things up. I wanted to see what it would be like for the people on either side of the conflict, and what they would do with the hands they had dealt themselves. The ones who started the war and then lost, trying to come to terms with the fact that they spent their lives in the service of an unjust cause. Their children, faced with having to atone for the sins of their parents. The winners, juggling their desires for retribution, the need for justice, and the responsibilities of power. What kind of shockwaves would ripple through a system economy where everyone is dependent on everyone else? And how would a society react to outsiders trying to impose the will of the victors and uprooting centuries-old institutions and cultural norms in the process?

The result is called Aftershocks, first in a series called “The Palladium Wars”.

When an earthquake happens, the seismic event doesn’t stop after the big tremors are over. You get aftershocks, which are smaller quakes that follow weeks, months, or even years later. The bigger the quake, the stronger and more frequent the aftershocks. They are dangerous because they are unpredictable, and they can collapse what was previously only damaged. It seemed like the perfect title for a novel about what happens when people try to rebuild their lives when the ripples of their actions are still kicking up the rubble when they least expect it.