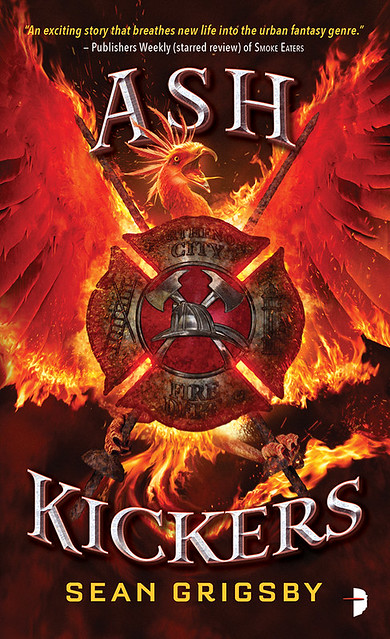 Author Sean Grigsby has a theory about people. It’s… not terribly optimistic. But it does have relevance for his latest novel, Ash Kickers, which features firefighters in a slightly alternate version of the world. One with dragons!

Whatever catastrophe nature throws at us, people always seem to make it worse.

Not all of us. Some seek to help and not to hurt, to heal instead of destroy. Firefighters are just one example of a few good people trying to make a difference. I’m proud to call myself one. But, like I said, sometimes there are a few hateful assholes standing in our way.

The Smoke Eaters series is about firefighters versus newly-returned dragons, sure, but there are other big ideas at play. In the first book I talk about corrupt government using disasters for their own gain, and replacing first responders with robots. In Ash Kickers, it’s something much worse.

So, the year is 2123. Parthenon City, Ohio is doing great because they’ve discovered that dragon blood can save lives and heal all wounds. The smoke eaters are no longer slaying the scalies, but tranquilizing them and placing them in specialized enclosures to live out their happy, fire-breathing lives.

The miracle of dragon blood has attracted people from all over an ash-covered United States to flock to Ohio, desperately seeking cures for their loved ones and to benefit from the safety of a dragon-free city.

But some people don’t like that. A group forms, calling themselves PC First, led by a man named Duncan Sharp (it was the sleaziest alt-right name I could think of). They consider these immigrants to be “rats” who are going to use up all of the medicine and resources. I think it’s pretty obvious by now on whom I based these fictional jerks.

However, just like in our reality, Parthenon City has actual problems to worry about. A phoenix has emerged and it’s causing the dragons to go bonkers. A string of suicide arsons is also plaguing the city, leaving police and fire marshals baffled as to who is behind it.

PC First, though, is more concerned about hoarding all the things! Just like a dragon. This lack of compassion for fellow humans, this cruel self-importance… well, it just makes things worse. Not only for decent people trying to make their burning world a better place, but also for the schmucks who try to get ahead by shoving others down.

When I’m called to fight a blaze, I rely on my fellow firefighters. No one fights over the attack line. No one complains that they weren’t the one to carry grandma out of the window. Every single person on the fireground is important and works as a team. We have to. If we don’t, someone could die.

I hate to break it to you, but the world out there is on fire right now, and we can either get busy helping or get busy hurting. I’m strapping on my helmet and charging in to quell the flames. I hope you’ll come with, because I can use all the help I can get.

← I Totally Forgot to Update Earlier Today, So Here, Have a Picture of This Nice Flower
They’re Not Middle Class, They’re Well-Off, and That Should Worry You →