The Big Idea: Jeffrey A. Carver 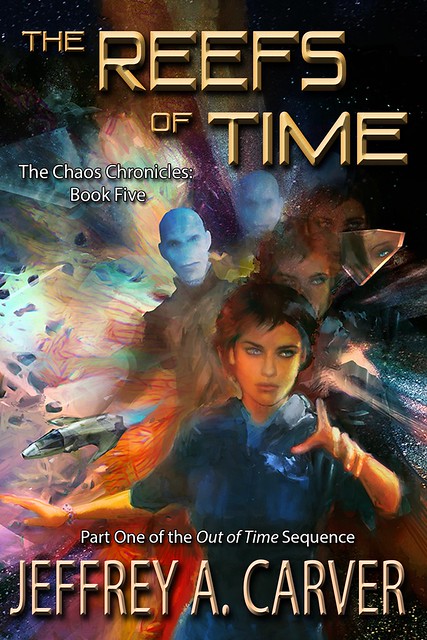 For his Big Idea for The Reefs of Time, the first of his Out of Time series, Jeffrey A. Carver talks about structure — of his story, the universe, and other important things.

Big ideas are the meat and potatoes of classical science fiction, but sometimes they collide with one another like bowling balls on a pool table. In The Chaos Chronicles, I have played with some pretty cool cosmic ideas: sentient suns and sentient singularities, supernovas and hypernovas started (or stopped) by the likes of humans and their alien friends, the starstream (a cosmic superhighway for star travel), an enormous Shipworld at the edge of the galaxy serving as refuge for species who have lost their home planets… and in my new book, time travel a billion years into the past, via quantum entanglement. I love this sort of thing! They are part of the driving energy of these books.

But long before I rolled any of that into this story, I had a big idea of a very different sort—a grand scheme for how I was going to structure the books. It was very new for me: I was going to make the books small. Short. Quick. Snappy. Entangled with each other, though not necessarily in a quantum sense.

I tend to create long stories—my mind just works that way—maybe not Game of Thrones long, but long enough that I’d completed a number of my books with enormous exhaustion, as well as satisfaction. Unfortunately, I’m also a slow writer. I had to rethink my approach.

Thus was born my crucial idea: Write that long story that’s percolating in your head—you’re going to, anyway—but do it in a string of short, connected-but-self-contained novels. That way you can keep the books coming, but still write long. (I can just hear you muttering, “Say, isn’t that what most people call writing a series?” Well, yes, that’s obvious now. But then, to me, it was a revelation.)

At first, I stuck to the plan. Neptune Crossing was suitably short, and pretty snappy. The books that followed were… not exactly short, but not long, really. And then I took a break to write in a different universe, and Eternity’s End was… the longest book I’d ever written. Uh-oh. By the time I came back to The Chaos Chronicles, my “big idea”—short, quick, snappy—lay in little bitty pieces. Smashed by the bowling balls of my other ideas. Sunborn took seven years. The Reefs of Time took eleven. A lot of people thought I’d quit writing, or died! When it was finished, it was so complex I had to break it into two volumes, though it was still one novel.

So much for my structural “big idea.” But I still had the cosmic gems I mentioned earlier. And they were a big part of why it took so long to write the blasted books.

When you set a story around sentient stars and supernovas and time-entanglement, there’s a central challenge: How do you wrap your people around such things? Part of it is a plotting problem. How do you make the ephemerals and the near-eternals intersect? But more than that, how do you create relationships? The stories I like to read are all about relationships. The cold universe might not care about us, but good stories aren’t just about cold, unfeeling things (or even “cold equations”). Stories are about people clashing and loving and hating and killing and rescuing and winning and losing and finding redemption. And by people, I mean everyone sentient, regardless of species, planet, number of dimensions occupied, or organic status.

I wasn’t sure how to do that. I’m a pretty intuitive writer, meaning I often don’t know what I’m writing until I’ve written it. Oh, I try to plan, but my way forward can be (with a nod to E.L. Doctorow) like driving in the fog at night with one headlight out. There’s a lot of faith involved. Faith that I’ll find the way. Fear that I won’t. Wrong turns. Bridges out. Lucky breaks. That’s how I felt as I threw my people together with cosmic entities.

So you want a character to somehow have a relationship with, maybe even a friendship with, say, a sentient star who lives on a scale so unthinkably different that the human is a mayfly by comparison? In this case (I eventually realized), it is helpful to have a third party who has a special facility for manipulating time. Time fusion. You can’t maintain it for long, but maybe for a brief interaction, the human and the star can connect. Share thoughts. Share feelings. Share joys and pain.

Or, as in Reefs, where the mental and emotional journey backward in time (through something called a ghoststream) is just as important as what you find when you arrive in deep time. I wanted to warn the characters: It’s crucial to notice little things you feel along the way. There might be something alive there, something that matters to you, even if you don’t know it yet. Also, that quantum thread of space-time you’re moving along is fuzzy, as quantum things tend to be. Think of it as yarn, not thread. The edges are uncertain. You might need to make use of that uncertainty to find your way home. You might need the help of unexpected others to find your way home. (I, the author, certainly needed the help of others—for example, my initial readers—to find my way home.)

But for all this, I think the biggest challenge remains the question (or questions) wordlessly posed: Who am I? What am I doing here? What will I do when confronted by, not just the problems I was expecting, but the hard edge of the infinite?

These are questions John Bandicut confronts—again and again, as his story unfolds and one crisis after another looms in his path. Will there be any rest for this man? Any salvation or redemption?

It’s not just John. Everyone who comes into his life, from the noncorporeal alien Charli, to the inscrutable Ik (whose homeworld was destroyed), to the two women he loves (Julie, a human; and Antares, an alien)—each one ends up facing similar questions. Why me? Can’t someone else save the world this time? Can I please rest?

Because you’re here, no, and not yet. And don’t expect to be thanked.

Battered by the winds of destiny, by the forces of chaos, by malice, or even just by ignorance, they have to find a way. It all seems terribly unfair. Who could be expected to rise to the job of (take your pick): preventing a comet from devastating the Earth, stopping a deadly AI from destroying a “Shipworld” vaster than the Earth, redirecting a rogue intelligent stardrive, or stopping a hypernova being engineered by a malicious intelligence? And yet, somehow, they find a way. Because they must.

If the lives of others depend on you, you must change, grow, adapt. Find a way. Because if there’s redemption to be found in this world, maybe that need is the first place to look.

9 Comments on “The Big Idea: Jeffrey A. Carver”