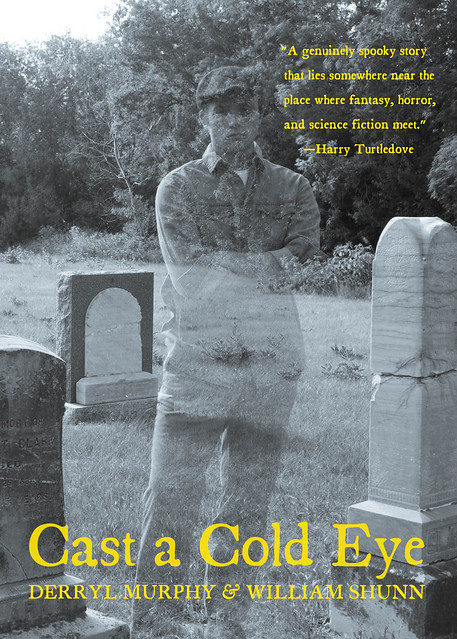 Authors Derryl Murphy and William Shunn weren’t necessarily looking to collaborate on a story. But then a chance encounter on the road set events into motion that would result in Cast a Cold Eye. I’ll let the two of them take it from here.

My mind often wanders to thoughts of Story on long drives. A story I’m writing, a story I want to write, often a story I had no idea existed. The latter happens more often than is healthy, and in the middle of one eight-hour drive with my wife and two (now adult) sons I watched an old truck with a hand-painted sign approach, and as it zipped by I knew I had misread the sign but insisted Jo write down that misreading in my notebook: Spirit Photographer.

At the same time I was wrestling with a few disparate ideas circling the Spanish flu epidemic that had killed a great-grandfather. Perhaps I could tie them together when I got home.

Reader, I could not. I tried and tried, but wasn’t happy with any of the outcomes. At one point I was sure this would be a short story, another time I worried I was looking at a novel. About ready to shelve it and move on to other things, I happened to read a story by Bill Shunn and thought, Gee, I wonder if he might have the key? And so I emailed him.

When Derryl’s email arrived, I was already working on too many projects at once, with too little time for them all – like usual. This was the summer of 2004, and I lived in Queens, New York. I had a novel and a handful of short stories going, not to mention another draft of my seemingly endless memoir project. Derryl is Canadian, but I had become acquainted with him online when he moved to Utah and started hanging out with some of my old writing group friends. I liked him and I admired his work, but jumping into a collaboration with anyone was not high on my list of priorities.

It wasn’t just that I was so busy with my solo projects. I don’t think I trusted the process of collaboration. I had only tried it once before, in the mid ’90s, with a young writer who was on a hot streak and couldn’t seem to not sell every story she wrote. Our collaboration sent her streak careening into a brick wall, and after just two rejections she swallowed some sleeping pills. She was fine – it was only six pills – but my desire ever to collaborate again had suffered a mortal blow.

Or so I thought. Despite myself, something about Derryl’s pitch spoke to me: “It involves photography and spirituality, sorta, which might make for a nice blend between us.” The pitch also involved Luke Bryant, a teenager whose parents were among the many who died in the Spanish flu epidemic, and Annabelle Tupper, a widowed “spirit photographer” who needs an apprentice for the duration of her stay in town.

With no idea what I was really signing up for, I said yes. Soon enough we were brainstorming over email, tossing ideas back and forth until we had a rough plot that we liked. Then Derryl sent me the first chunk of actual text – Luke hiding out in a cemetery where he can feel the statues watching him – and the hard part was underway.

It’s a difficult thing, writing with someone else. Whether it’s more difficult doing so long distance or if you’re in the same room fighting over the keyboard, I don’t know. But while it was a long haul – some four years – it did result in 24,000 words, as opposed to the five or six years it took to write a 5,100-word story with Peter Watts. (Points to the first person who can point out the odd thing Bill and Peter have in common.)

What did that four years get us? Well, I fully believe that Luke Bryant would not be the realized, pained, and desperate young man he became if it wasn’t for Bill. I think working together resulted in a fine line between keeping things real and heavy-duty one-upmanship: we didn’t mess things up for each other, even as we ramped things up more than either of us might have done on our own.

It also got us a damned spooky story. And a damned moving one.

From this remove, it’s hard to remember who was responsible for which elements of Cast a Cold Eye. Certainly Derryl provided all the expertise in early photography, including the eerie detail of Annabelle’s chemically blackened eye. The Nebraska setting was my contribution. Beyond that – the stern uncle and aunt, the gun in the truck, the ghostly buffalo – who can say? One thing I can say for sure, though, is that this slim book would not exist without both of us.

The Big Idea of Cast a Cold Eye, looked at one way, is of a boy plagued by ghosts who learns to see a brighter world – literally – through the lens of a camera. It’s the story of a haunting, yes, but even more so it’s a story about perception.

But looked at another way, it’s a story about two people with their own ways of doing things learning to work together to create something neither one could have created alone. That’s what Luke and Annabelle do in the book. I like to believe that’s what Derryl and I did in learning to tell their story.

We were lucky enough to sell the story, a rejection or two before a fairly quick acceptance from PS Publishing in the UK, which resulted in a gorgeous little hardcover book, in a very limited signed and numbered edition and an only-slightly-less limited unsigned edition. When it was gone, it was gone. An apparition only a few people got to witness.

All these years later, we’re happy we can finally share the story of Luke and Annabelle and the ghosts that haunt them with the wider world.