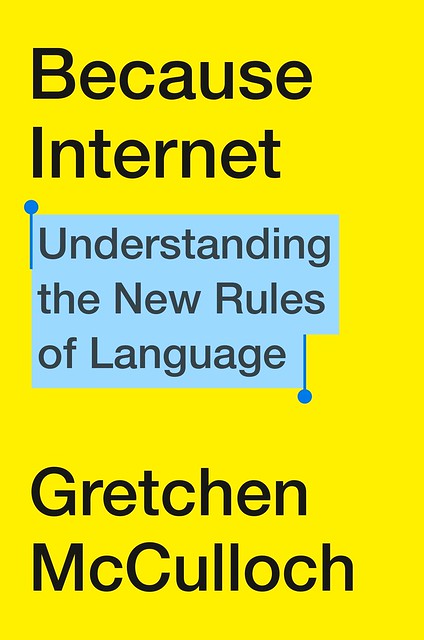 Hey, did you know you’re on the internet right now? It’s true! And as it happens, the internet has been doing things to the way language is used for almost as long as there has been an internet. And now, author Gretchen McCulloch is here to tell you a little bit about that, why she felt that it was interesting enough to capture in her book, titled, naturally enough, Because Internet, and how, in some ways, a book is an ideal repository of information about an electronic medium.

In 2014, I started writing a book about internet language. Every so often, while I was working on it, I would look at myself and think, surely this is a fool’s errand. How could I possibly sum up the entirety of the living, breathing language of the internet within a couple hundred static pages?

That wasn’t my only problem. I also had to figure out who I was writing this book for. Imaging the audience is a crucial part of writing for me — it inspires my jokes and metaphors and cultural references, even though I know it’s never completely true. When I write for somewhere like The Toast or Wired, the audience is already very clear in my imagination, a joyful companion while I write. But I could imagine these audiences because I was already reading these news sites — writing for them is adding my voice to an existing chorus. A book doesn’t have an audience when it doesn’t exist yet.

The big idea that solved both of these problems together was deciding that I was writing to the reader of the future. If it was going to be several years before anyone read the words I started drafting in 2014, why not acknowledge how weird that was and cast my sights even further forward? If any book about the internet was inevitably going to be out of date sooner or later, why not write it with an eye to the reader of, say, 2049 or 2099, just as much as towards the reader of 2019?

Writing towards the future provided useful practical guidance. One thing I had to figure out was exactly which bits of the internet needed additional context. When I was writing towards the reader of the present, I’d worried about seeming condescending by explaining what Snapchat or Usenet was (for two, ahem, very different audiences). But when I thought of myself as writing towards the future, I realized that I was grateful to writers of the past for their vivid explanations of now-dead technologies, and felt less self-conscious about necessary asides.

Another practical thing that I did for the benefit of future readers was to safeguard against link rot, a problem I faced constantly when trying to access urls from old articles. I archived all of the links mentioned in the book via the Internet Archive’s Wayback Machine, and made a donation to help them stay in operation, which I then made a note of in the acknowledgements section. This allows readers of the future to know what to do with any urls that stop working, acknowledges the important work that the Internet Archive does, and encourages other authors to do likewise.

Writing for the future also let me write a book that wouldn’t sound dated quite so quickly.  I grew tired of reading “now” or “current” or “modern” and flipping to the copyright page, so I became conscientious about using absolute time references like particular years and decades. I noticed the amusing datedness of words like “Web site” and “E-mail” in earlier books about technology. Linguistic conservatism caters to the reader of the past, but the reader of the past doesn’t exist anymore — someone in 1999 can’t bend time and read a book published in 2019. The reader of the future does exist — someone in 2039 can very well pick up a book published in 2019. Why should I not, in my turn, aim to avoid things that are likely to seem hilariously out of date to a reader a few decades hence? (I’ll give you a clue: one of them is uppercase “internet.”)

But those were largely cosmetic changes. Writing towards the future also changed the structure of the whole book. Rather than worry about whether I was chronicling a complete list of all of the possible functions for emoji or punctuation, all of the possible memes or social media platforms, I went for a longer timeline of where each of these things came from — all caps has precursors in Victorian letters, irony punctuation has proposals back to 1575, people doodled in postcards before emoji came on the scene, and so on. I started aiming for a bigger picture of how each of these things fit into communication, one that could still be true even if we replace all of the specific sites and tools we’re using.

I found out that, paradoxically, a book can be bigger than the internet. The very constraints of a book — its linearity, its lack of updates — are also its greatest strengths. I can be far more confident that each reader will have a roughly similar experience of a book, rather than spidering off in all directions as with hypertext. When I work on an article or the podcast, I have to assume that each individual post or episode might be the first time someone has even heard of linguistics. There’s no designated reading order for the internet. But with a book, I have the luxury of being able to take people through a sequence of chapters, letting ideas build on top of each other, developing a fuller argument. It’s a smaller space, but it can support bigger ideas.

In the end, I wrote a book about the internet by not trying to compete with the internet on its home turf. If you want to look up the latest memes and slang, there’s always websites like Know Your Meme and Urban Dictionary and Emojipedia. But if you want something that tries to take a step back and see the internet as if we’re already living in the future, well, may I interest you in a book?