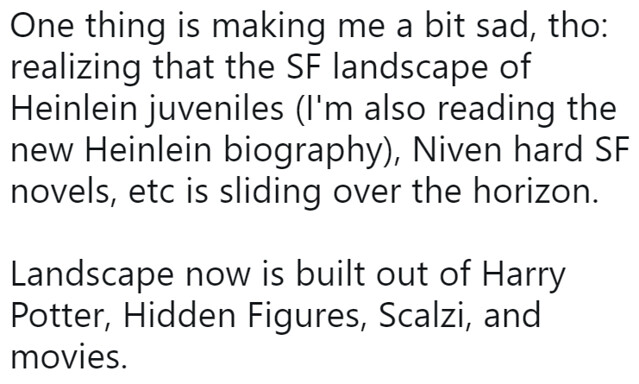 An author who actively dislikes me and what I write laments on Twitter that in his opinion the era of Heinlein and hard SF has been replaced by — Me! Oh, and JK Rowling and movies and black women who do math.

Leaving aside whether that particular assertion is accurate (and even if it is, whether my placement on this list is motivated more by animus against me than my actual importance, because in terms of the cultural impact of the things listed, I am a very distant fourth behind Potter/JK Rowling, Hidden Figures and the entire medium of film), some thoughts on this:

1. I like the idea that someone who dislikes who I am and what I do nevertheless has to begrudgingly admit that I represent a principal mode of commercial science fiction right now. Yes, yes, he hates it, and me. Oh, well.

2. It wasn’t that long ago that I was considered “the next Heinlein” — seriously, the Publishers Weekly review for Old Man’s War said it “reads like an original work by the late grand master,” and since then I’ve been more or less continuing a “golden age of SF” vibe in my work, updated for the current era (note that this updating is the part fellows like him whine about). So there’s no small irony in complaining that the Era of Heinlein has been superseded by the Era of Scalzi.

3. Imagine claiming to enjoy hard SF, and yet somehow being disapproving of the popularity of Hidden Figures, in which three women employ their understanding of for-the-time-cutting-edge math, physics and technology to allow humans conquer space. It’s literally everything hard SF aspires to be.

4. Anyone lamenting that film is a now major mode of popular science fiction knows nothing about either film or science fiction, and the popular marriage of the two which goes back at least to 1902 and Georges Méliès, i.e., long before the age of Heinlein and “hard SF.”

5. Grousing on the rise of Potter and Rowling is like a music snob griping about the rise of the Beatles. It’s a once-in-a-generation cultural event, and you might as well complain about the tide coming in, and going back out again.

This fellow may at least take comfort in the idea that my era will one day pass — indeed, might be already passing as we speak! Unfortunately for him, what comes after me (as in, is here right now) in science fiction is NK Jemisin, and Mary Robinette Kowal, and Yoon Ha Lee and so many more astounding talents like them. All of whom I strongly suspect this particular fellow will find some reason for objection. “Some reason.”

The problem isn’t really that the “Age of Heinlein” is passing in science fiction. The creative mode that Heinlein wrote in still exists and will continue to exist, inasmuch as I and many other people write in it, and do just fine, creatively and financially, with it. The same with Niven (who is as it happens still alive and still creating) and his mode, and all the other folks working in the hard and golden age-style SF modes. It and they are still there and doing well. The “problem” is that a certain sort of person who claims science fiction for his own is no longer centered in the genre, and the genre no longer listens to his demand to be centered in it, and is doing just fine without him being centered there.

At least this fellow has the sense to admit it’s happened. It has. The genre isn’t going back.

78 thoughts on “Oh, Look, Another Silly Kvetch About Me”