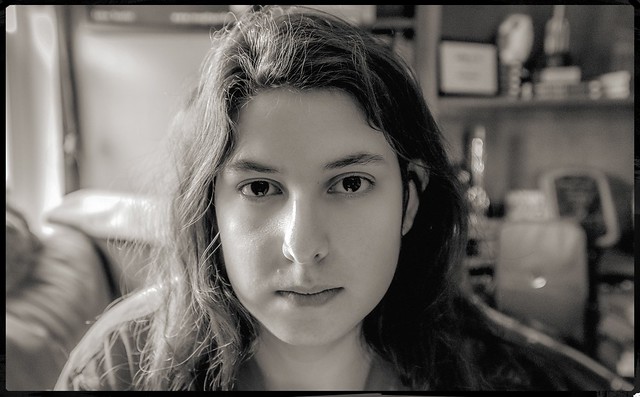 Athena finalized her next semester’s class schedule today, and one of her classes is on digital photography. This got me talking about how the camera and the eye don’t really see the same thing at all, and then taking pictures of her with my 28mm – 300mm lens at different focal lengths so she could see how much it changed the apparent shape of her face (very generally, if you’re doing portraiture, the higher your focal length is in millimeters, the flatter and wider someone’s face is going to look). Then we also talked about how I used photo software to work with pictures after I took them, and how what you do in Photoshop (and other programs and plugins) can change the photo.

The photo above, for example, was shot with a 28mm focal length, then tweaked in software to fix facial distortion, lighting and skin tone evenness, and then turned monochromatic, with grain and a border added. The idea was not to turn the photo into some obvious and unrealistic Facetune slider-fest (although sometimes that’s fun to do), but to at least initially bring what comes out of the camera closer to what the human eye sees, and then find a visual presentation that compliments the subject. Mind you, this is what photographers have done pretty much since the advent of photography; the only difference is that digital tools make it quicker and easier (and cheaper!) to do, without the need to devote space in one’s home for a darkroom and its attendant poisonous chemicals. 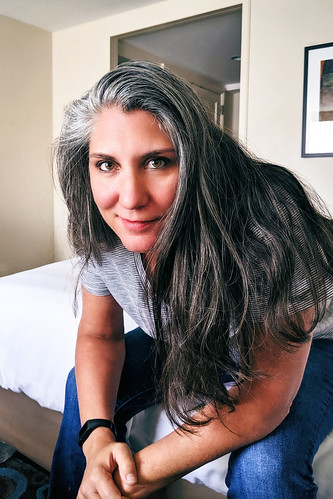 I don’t think it will come as a surprise to people that when I post pictures of Athena and Krissy, I run them through Photoshop to clean them up and to make them more visually interesting. I am occasionally asked whether either my daughter or wife ever take a bad photo; the answer is yes, of course, it’s just I never show you any of those. I show you my bad photos. That should be enough for anyone. Anyway, I’ve from time to time had people tell me that they thought I probably prettied up pictures of Krissy but then they met her in real life and realized that no, she actually does look like that, which I find gratifying. As I noted before, I want the pictures I take to accurately reflect life.

It was fun to talk photography with Athena because it’s a hobby of mine, and it’s fun to explain your hobby to others, and also because Athena is already a pretty decent photographer herself, so talking about something she already has an eye for I think will make her eye even better in the long run. I suspect she’ll do just fine in her class this next semester. 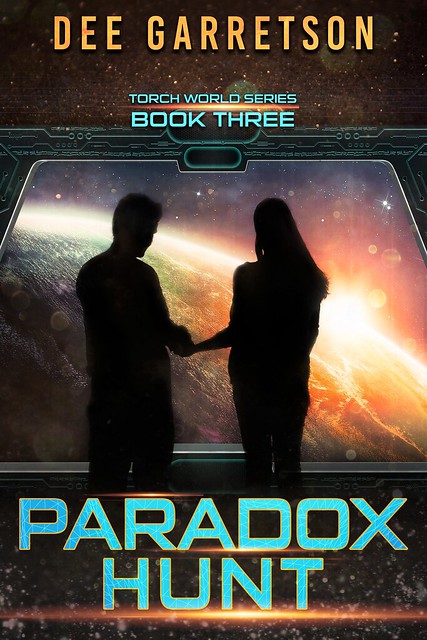 There’s the old adage that history is written by the winners — but history, and who gets to tell it, is more complicated than that. As Dee Garretson will tell you, as she talks about her new novel, Paradox Hunt.

My son used to believe I had eyes in the back of my head, to the point where he would comb through my hair looking for them. At those times I would tell him I could make the eyes disappear whenever I wanted to and he fell for that as well. It wasn’t something he wanted to believe, unlike Santa Claus, the tooth fairy and the Easter bunny, all who rewarded his beliefs with good things. He believed me because I was a person in authority. I feel a tiny bit bad about it now, but then it made my life easier so he wouldn’t pinch his sister in the backseat when I was driving.

We also had a kid in our neighborhood with an amazing imagination who convinced the other kids they could get rabies from touching a tree that a rabid animal had climbed. While that kid didn’t have any authority, he could tell stories and sound absolutely convincing so they believed him. I really hope the boy grew up to be a writer instead of a politician.

It’s easy to shape the beliefs of a few young children, but people with power and reach can manipulate the beliefs not just of the young and gullible but of the educated as well. I’ve thought about this for a long time. I studied history in college and I’ve wanted to write a story with this theme ever since I read an article in the Chicago Tribune about how the Chinese government didn’t broadcast the 1969 moon landing and decided their people didn’t need to know it happened. It happens in the U.S. as well-we hear about far too many textbooks that try to lessen the impact of slavery or promote a revisionist history of the Civil War.

So the big idea for Paradox Hunt arose from all of this: How do you know the history you are taught is true?

Paradox Hunt is about two young people from two different cultures, and each culture has manipulated the accounts of their histories to keep the powerful in their societies in control.

The galaxy is on the brink of chaos and Earth has grown repressive over the centuries, touting democratic principles while ruling with an iron fist. Sixteen-year-old Quinn Neen has discovered the truth behind the façade and he is determined not to be part of the elite who let the horrors continue.

I wanted to take this story beyond just having the characters fight against authority. Both Quinn and Mira, the main characters, benefit from this power structure. Their families are in charge. What does it take to move beyond your own self interest to do what’s right? It’s easy to search for truth and rail against power if you don’t have it, but if you benefit from it, it’s so much more difficult.

I wrote this story as a future where Earth is in control of much of the galaxy, because it’s easy to imagine that given humans’ propensity to colonize what they want, it’s a likely way in which the future may play out. I wrote it as young adult fiction, not because I want to go back to being a teenager (!), but because much like writers trying to get published for the first time, young adults have that mix of naivety and bravado to keep going even when it seems like everyone around you is trying to slap you down.

Save the galaxy? Sure, we can try that. Why not? Who says we can’t?

I like to write about people who are optimistic enough to believe they can make a difference. We all need those stories in this day and age. Oh, and just for fun, I’ve included a diva parrot, because why can’t there be parrots on space ships?