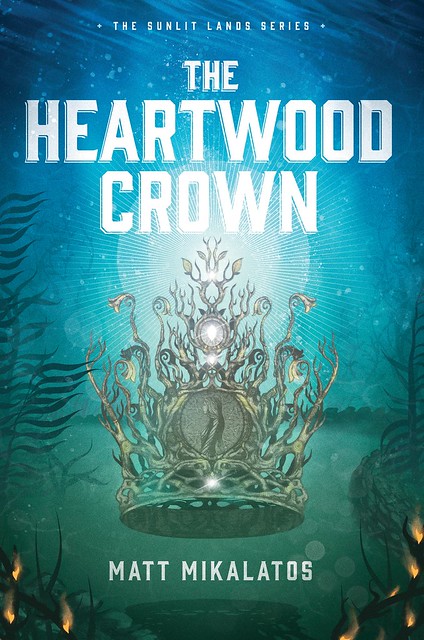 In today’s Big Idea, author Matt Mikalatos considers the idea of justice, and how it works both in our world in and the world of his novel, The Heartwood Crown.

“Whatever happens, don’t go to the police.”

Twenty years ago I lived in a totalitarian state. Still, I was an American, and was treated with general respect. We Americans brought a decent amount of money into the country. My acquaintance who warned me away from the police brought in more than a decent amount.

Someone had broken into his house in a gated community and stolen some electronics. He made a report, and the police returned his belongings a few days later. They had caught the thief, they said, and executed him. The thief’s family had been required to pay for the execution.

The emotions coming out of this moment would become a core part of The Heartwood Crown. The horror of someone losing their life over a VCR. The recognition of how messy it is to seek justice. Do we consider issues like this thief’s poverty? Why is justice harsher if he steals from the rich and influential? Wasn’t another injustice created by killing this man? What does that mean for his family, his friends, his community? What is the role of government and the police force here? And, years later, realizing that this sort of thing happens here in the United States, too… that too often terrible costs are paid for small crimes.

The Heartwood Crown is the second book in a trilogy. I already had the big idea for the series overall: There’s a fantasy world called the Sunlit Lands that’s only open to teenagers. What’s more, to cross from our world into the Sunlit Lands they have to be teens who have experienced tragedy or true injustice in their personal lives.

And I already had the main characters, carrying over from the first book, The Crescent Stone:
Madeline Oliver is a privileged American with a terminal illness.

Jason Wu lied to his parents, and his sister died as a result.

Darius Walker had a loved one stolen away by the magical people of the Sunlit Lands.

The big idea I was lacking was a theme. I knew that I wanted to explore issues of injustice, generational wrongs, revenge, mercy, and forgiveness, but I was having a hard time narrowing all that down.

I had plenty of in-universe ways to explore those themes. Madeline discovers her terminal illness was the result of magical interference in her life. There are people in the Sunlit Lands called the Scim who have been in generations of poverty because of another people group, the Elenil. Shula is dealing with the loss of her parents and siblings. And all these teenagers had the passion and desire to fix the world, they were looking for solutions.

The intersection of injustice and the question “what do we do about it?” finally brought my big idea into focus: exploring the myth of redemptive violence.

My whole life I’ve been taught that violence is the solution to injustice. Entire genres of movies taught me that if someone threatened my loved ones, I should hunt the bad guys down and kill them. The government taught me that if there’s an evil regime somewhere in the world, we should go to war. When I was a child, some people in my religious tradition even taught me that a loving God required not just death but violence in response to evil actions. “It’s only through violence that we can have peace,” they would say. It sounds like a George Orwell quote, but that’s the message of redemptive violence. It’s what leads us to places where criminals are executed for stealing a VCR or selling loose cigarettes.

Fantasy novels often embrace this idea. We have to kill the evil king, fire bomb the city with dragons, build our undead army, or find the magic spear that can slaughter our enemies. It’s not that other tools don’t exist, but if there’s injustice we reach instinctively for the sword.

So now that I had the big idea, I had to flesh it out. Darius already had a magic sword and a thirst for revenge, so I sent him off for the traditional quest: build an army, then find and kill the evil king.

Meanwhile, Madeline’s perspective changes as she confronts her own mortality. She doesn’t want to kill anyone – her own impending death is more than she can bear — she just wants to fix the world. Does she have the moral imagination to find a solution? Is power and violence required to change the world?

Shula is wrestling with the violent deaths of her own family… and how could anything other than a violent response be sufficient?

And Jason is dealing with the very real question that haunts many of us: How can he forgive himself?

This led, of course, to flying cats and swamp monsters and necromancers and a kitten-sized unicorn named Delightful Glitter Lady. There are unbreakable oaths and dirigibles and enchanted shackles and – yes – revenge. Secrets. Sacrifice. It’s still a fantasy novel, after all!

Ursula K. LeGuin said, “Imagination is the instrument of ethics. There are metaphors besides battle, many choices besides war, and most ways of doing good do not, in fact, involve killing anybody. Fantasy is good at thinking about those other ways.”

Twenty years ago a man was executed for stealing from an acquaintance of mine. Today there are spaces where our culture keeps pushing us, over and over, toward violence. The Big Idea for The Heartwood Crown is that maybe, just maybe we can expand our moral imagination to find new solutions to the problems that plague us. As Jason often says in the book, we have to learn to change our story. That was a little frustrating as the author since he would never do what I wanted (he refuses to fight warriors, confront dragons, or accept the consequences of magic), but it’s good advice for us in real life.