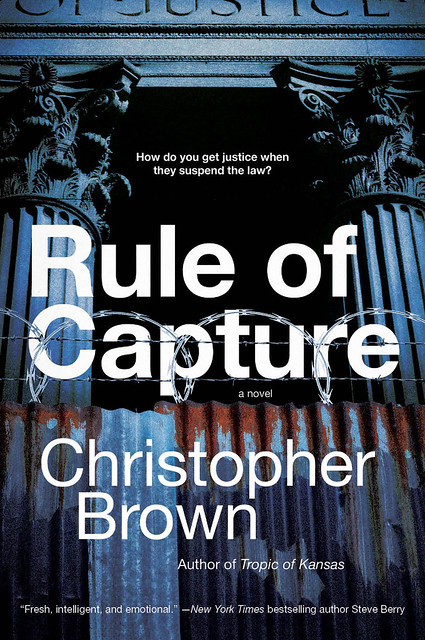 No matter what, there are always lawyers. But what happens when there lawyers… but not much law? It’s an idea — dare we say, a big idea — that Christopher Brown considers in his novel, Rule of Capture.

Who are the lawyers you call when you get in trouble in dystopia?

This question came to me one hot summer day several years ago when I was working on my last novel, Tropic of Kansas. I was diligently slogging my way through the middle of the book—you know, the part where you get totally stuck in the weeds, lost without a compass, tearing your hair out and nothing to help you except for every book you’ve ever read and all the things the world around you has to teach if you open your eyes. The characters I was writing that day were a pair of young fugitives, on the run through the ecologically devastated heartland of an authoritarian mirror America, chased by Carhartt militias and autonomous drones. And then one of them got sick, and had to turn himself in. What do you do when your buddy gets locked up in a dystopian prison camp? Especially when you’ve already had one jail break, which is all any single novel can handle.

I took my own break, ran an errand, and then stopped for a coffee by the side of the highway. As I walked back to the car, I noticed the giant billboard looming over me with the image of a larger than life dude sporting leather jacket and tie, wild long hair, a cunning smile, and a very Austin tagline: THE LAWYER WHO ROCKS.

And I immediately thought, what kind of cases would that kind of lawyer handle in my dystopian USA? Being one myself, I know lawyers can make a living helping navigate any legal system you throw at them. And even in the most repressive societies, the ones that lock people up and disappear them without due process, there are lawyers who fight to extract some kernel of justice—and extract some fees along the way.

By the end of the day, there was a billboard inside my novel. Donny Kimoe, “the lawyer even the law is afraid of.” And conveniently for my cell phone-avoiding character, there was a pay phone nearby, and a last quarter in his pocket.

Donny’s onstage scenes got cut, but his billboard survived. And after I finished Tropic of Kansas, I kept thinking about the character, and about that idea, of the lawyers of dystopia. And the more I thought about it, the more potential I saw. Science fiction is full of laws, from Asimov’s Three Laws of Robotics to the Prime Directive, but almost entirely devoid of lawyers. In contrast, most legal thrillers are not actually about the law, but just the facts—figuring out who committed the crime and meting out punishment. If you set a legal thriller in a science fiction, the “literature of ideas,” you could have the best of both worlds—a gripping courtroom drama whose outcome rides not just on the lawyer proving the facts, but on the lawyer figuring out how to work an unjust system.

I pitched the idea to my editor—“think Better Call Saul meets Nineteen Eighty-Four”—and he liked it so much he wanted two.

Rule of Capture, out today from Harper Voyager, is the result. The story of Donny Kimoe, a burned out trial lawyer defending political dissidents hauled in front of the special emergency court of an America drifting into totalitarianism. Busy trying to save one client from the death penalty after he’s framed for aiding an attack on the President, Donny gets assigned the unwinnable case of Xelina Rocafuerte, a young journalist and eco-activist who witnessed the assassination of a grassroots political leader and is being prosecuted as a terrorist to silence her.  To get her off, Donny has to extract justice from a system in which due process has been suspended. That means breaking the rules, and risking the same fate as his clients.

Donny practices law in a world where the clients are mostly guilty. It’s the laws they violate that are unjust. In otherwords, it’s a lot like the real world, but uses the tools of dystopian fiction to tell truths more conventionally realist legal thrillers cannot. Crafting an imaginary legal system is as challenging a form of worldbuilding as it sounds. But to get started, I didn’t have to go much farther than the nearest law library, where, it turns out, you can find real-world precedents for just about any dystopian legal premise you can imagine—usually codified in laws that are still on the books.

I found an entire section of dusty how-to books on the administration of military rule over the civilian population, mostly from the time before World War Two when martial law was frequently invoked to suppress labor struggles. The suspension of habeas corpus so popular in the South American dictatorships of the 1970s is a power the founders wrote right into our Constitution—one Lincoln invoked during the Civil War. And for my Kafkaesque emergency court, I drew from the trial transcripts of the tribunals still going on at Guantánamo Bay. To paraphrase the Gomi-no-Sensei, the dystopia is already here, it’s just not evenly distributed.

Once the research was done, I learned that writing lawyer stories is harder than it looks from the outside. Behind the often clichéd courtroom scenes (“Objection!”) and procedural narrative structure, they require you to tell your story in a very different way—the way evidence is presented to a court, which is very different than the usual “show, don’t tell.” Lawyers are a peculiar species of trickster, and they don’t allow too much interiority for fear of giving up their sneaky strategy. But once you figure these rules out, the format reveals tremendous promise. Especially when you mix it up with the things you’ve learned from turning the world upside down in science fiction.