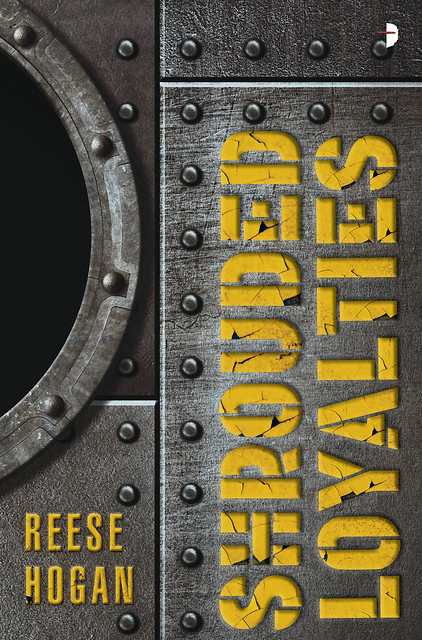 In fantasy worlds, we’re used to the idea of “secondary worlds” — worlds not unlike our own, branched off in specific ways — and in Shrouded Loyalties, author Reese Hogan branches off from an unusual place indeed.

To try to figure out the big idea behind Shrouded Loyalties—and the wording here is something I had to constantly remind myself of as I thought about this blog post; not all the big ideas coming together, but the big idea that started it all—I’d have to boil the book down to the very first elements that were present, before it blossomed and grew into something beyond what I imagined.

Only three things from my very first draft survived until the final book: 1) the setting—I always knew I wanted a World War II-inspired secondary world; 2) people being hunted for magic tattoos—these grew into the marks two of my characters receive in the second chapter; and 3) the idea of a soldier returning home from war to discover that her little brother is an enemy collaborator.

It was this last idea that really defined how the book grew. Originally, Blackwood was a soldier in the army, rather than a sailor on a submarine, but I needed her to be farther from home to give her brother, Andrew, the space to distance himself from her emotionally. I needed to give the enemy a reason to want Andrew on their side, so his and Blackwood’s parents became scientists who’d left valuable research behind after dying in a freak accident. I needed to give Blackwood a secret big enough that the enemy getting ahold of it could mean the downfall of her own country, and I needed to give Andrew the motivation and means to take that secret and give it to the very people she hated.

Finally, from a draft of the book that only shared Blackwood’s side of the story, I gave Andrew a point of view, so the reader could understand why he makes the decisions he does—and maybe even sympathize with those decisions. So, before I ever had a pair of spies targeting the Blackwood siblings or an alternate world filled with monsters, I had Blackwood and her brother, two very very different people who could barely hold a conversation, pitted against one another in the most personal way possible.

The result brought me into territory I hadn’t expected, in terms of grief and depression and self-loathing, and I found myself growing increasingly convinced that this was the story my heart had been leading me to all along—the temptations that can seduce us in our darkest hours, and the powerful toll mental health issues can have on relationships and communication. I am no stranger to these feelings, but I don’t often see them explored in the SFF genre, and I realized as I wrote Blackwood and Andrew’s relationship that this was my chance to make these issues accessible in a new way. That’s why Shrouded Loyalties, a novel about alternate realms and spies and monsters, is at its heart a story of two people who never learned to communicate.

But I didn’t know any of this when I started writing it. In the beginning, my big idea was as simple as a teenage brother lured to the wrong side of the tracks, and the guilt of the big sister who knew deep down that she should have been there to protect him. I didn’t know if the relationship would be fixable. I didn’t know how far Andrew would go in his collaboration. All I knew was that there’s nothing more devastating than a sibling relationship gone this badly wrong, and that it was something I was dying to explore.