A Brief Note on Mary Robinette Kowal, On the Day After Her Hugo Best Novel Win 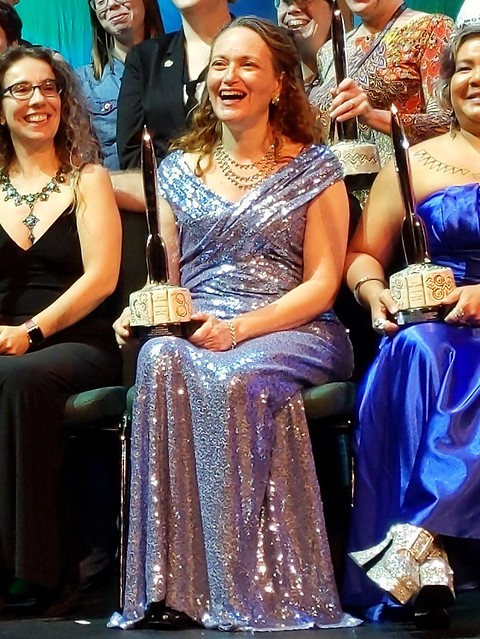 A number of years ago, and during one of those occasional mud-flinging spats that happen in science fiction, a person who I will mercifully not name now tried to dismiss and minimize Mary Robinette Kowal as “no one you should have heard of, and no one of consequence.” This was when Mary Robinette had already become not just a writer of note, but someone widely admired and respected by her peers and colleagues for the work she had done for the community of writers and creators.

The intent behind this person’s words was cruel, and I believe intended to insult and to wound. After no small outcry, this person apologized, and Mary Robinette, who is one of the most gracious people I know, accepted it. But I for one never forgot either the insult to her, or the dismissive intent behind it.

Last night, Mary Robinette Kowal won the Hugo Award for her novel The Calculating Stars. This follows her and her novel also winning the Nebula and Locus Awards. Mary Robinette wrote a tremendous book, and right now she stands at the pinnacle of her field, with all the esteem that it could offer to her, all of which she has absolutely and definitively earned. I could not be prouder of my friend if I tried, not only because she is my friend, but because of her talent, her grace, her strength and her perseverance. I admire her more than I can say.

She has given the best answer to anyone who ever dared to say she was no one you should have heard of: She kept speaking. She kept speaking, and the world listened. And then, having listened, it celebrated what she had to say.

← The Moon and the Samuel Beckett Bridge, 8/16/19
Jeannette Ng, John W. Campbell, and What Should Be Said By Whom and When →

59 Comments on “A Brief Note on Mary Robinette Kowal, On the Day After Her Hugo Best Novel Win”