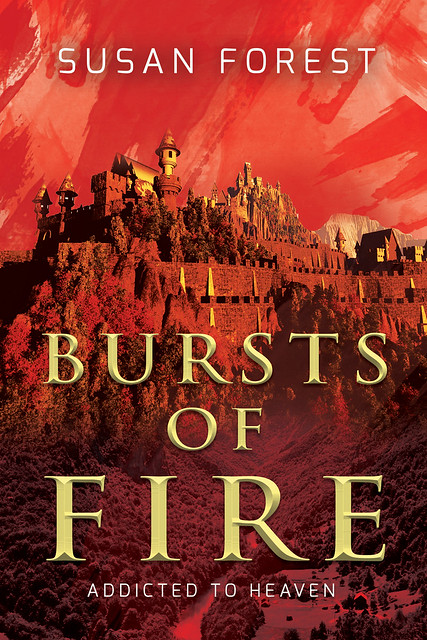 In today’s Big Idea, Susan Forest is an author with a mission — a real-world mission that reveals itself in a fantastical way in her novel Bursts of Fire.

I love traditional fantasy. I love the magic and the quest. I love the perils, the monsters, and the politics. So when I set out to write Bursts of Fire, I wanted to create a clever, light-hearted heist romp fantasy.

Ever have a story grow?

Ideas beget ideas prolifically, and the story became an epic political and family saga. When I spoke with Laksa Media about publishing my novel(s), the topic of the central driving idea came up. Laksa Media’s mission is to bring social issues to light for examination and discussion through fiction. When Publisher Lucas K. Law asked me what social cause my series addressed, I looked at him for a moment and blinked.

But I immediately knew the answer to his question. Addictions. Because the subconscious plays a role in story creation, even when the conscious mind is unaware of its influence, the subtext was there all along. It only took his question to make me see it—The Big Idea.

Why addictions? For me, the answer is clear. There is no family that has not been touched by addictions, including mine.

Take James (not his real name), a former boyfriend.

I met James when I was a newly-single mom breaking into my first semi-professional acting role. James was a pro, and if not handsome, he was charismatic, highly respected, and talented. He was also an alcoholic. And he was attracted to me—of course, at a time when I was feeling most unattractive and vulnerable.

James only stayed in my life for about six months, and those six months were wild. I was cautioned about him early on, but he made me feel like the only woman on earth. He also sent me away in tears. I knew he would never become a permanent part of my life, but I think the defining break came for me when my sister-in-law, a psychologist, warned me never to leave him alone with my children.

The idea of addictions has always fascinated and terrified me, which may be one reason why my subconscious had built this theme into the story when I wasn’t looking. But the topic dovetails perfectly with Laksa Media’s mission; it’s an issue of mental health hidden in shame, and needs to be brought into the open. Through Laksa’s editorial input, deeper research, and further drafts, Bursts of Fire—and the entire Addicted to Heaven series—deepened in complexity and richness.

Alcohol and drug addiction are little-understood forms of mental illness; for centuries, the stigma of the illness has colored research and treatment, leading to medical and health myths. Heredity, environment, social structures, economics, and politics all appear to have roles in the development and persistence of the malady.

Those with genetic conditions, such as untreated ADHD (which runs in my family), are statistically more likely to succumb. So are people with early trauma. Exposure to substances, particularly at a young age, seems to be a factor, and people diagnosed with addictions have measurable changes in their brain structure and chemistry.

Cultures which pair alcohol with masculinity, or those exposed to cultural trauma such as having children removed en masse from families, have higher rates of illness. Drug policy has been racially and economically influenced, from the British/Chinese opium wars to the criminalization distinctions between cocaine and crack.

But, much evidence is correlational, and causality is complex.

Treatment has ranged from exorcism, imprisonment, and forms of chemical intervention, to abstinence through willpower or religion. Harm reduction has shown promise, but it is highly controversial. Medical care models based on for-profit frameworks are not necessarily also based on best scientific research.

Hope for better treatments comes from our willingness to see addictions as chronic illnesses like diabetes, which can be treated through lifestyle and dietary adjustments or through medication. If addiction can be separated from its clinging stigma, perhaps we can create a similar range of individualized therapies with greater effectiveness.

The bottom line is we simply don’t have all the answers. But a seven-book series gives me the scope to explore a wide range of issues dealing with substance use.

The first book of the series, Bursts of Fire, releases three high-born, magical sisters into a world of abrupt change, to rely on their wits and unravel the mystery of a mad king’s inexplicable attack on their home. It abounds with breathless excitement, but it also deals with the first tastes of addictive spells.

Book Two, Flights of Marigolds, takes the adventure and politics higher with a rebel defeat and pursuit of a McGuffin, but it also takes the social issues deeper by examining the question of enabling and co-dependence. Later books in the series will introduce a pair of mischievous con men and a clever cat burglar and also address factors that make some individuals and groups more at risk for substance abuse than others.

The series considers not only adverse consequences, but also the joys and delights of substance use. Drugs and alcohol have been used throughout history and across cultures for celebration, rituals, social affiliation, pleasure, inspiration, and spiritual connection. Carl Hart, a professor of neuroscience and psychology at Columbia University, notes, “If the vast majority of people who use any drug do not become addicted, you can’t blame the drug for addiction. The reality is, the overwhelming amount of drug use that occurs in a society is positive; not only positive, but life enhancing.”

So, yes: Bursts of Fire (and its ensuing sequels) is many things: a political epic, a family saga, a heist romp, a magical fantasy. It is also a garden of exploration for big ideas. Bring on the delights of fantasy novels. Bring on the thieves, kings, and magic users. Bring on the hidden social issues. Big ideas can grow from stories of rollicking adventure. And one can also have thoughtful content within a book or a series that is fun to read.