An Evening With Iron Maiden 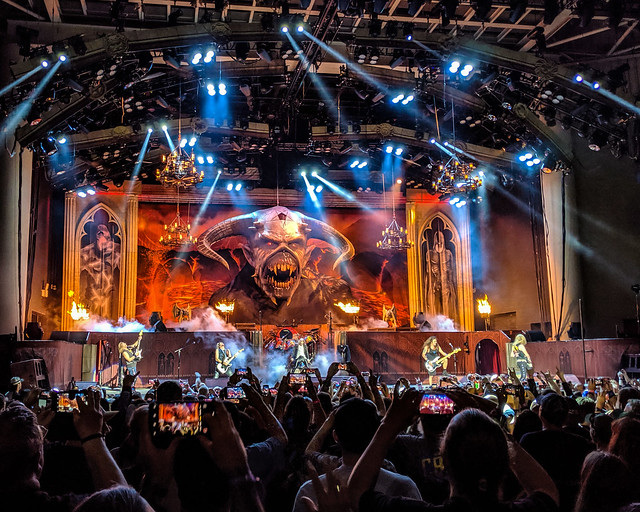 When I was in high school, Kevin Stampfl, one of my best friends, was a huuuuuuuge fan of Iron Maiden, and through his good graces I was introduced to the band, and its repertoire of delightfully aggressive new wave of British heavy metal. I became a fan myself — Maiden was, and is, in the top tier of my favorite metal bands. I liked the songs, I liked the musicianship and I liked the fact that they were utterly gonzo about what they were doing.

For all that I never managed to see them live. Weirdly, I saw lead singer Bruce Dickinson live, during his brief sojourn as a solo artist back in the early 90s, in a San Diego club the size of my living room. But the full Maiden experience had eluded me until last night. Maiden is on their Legacy of the Beast world tour, which is basically the band going “well, we don’t have any new material at the moment, so we’re just gonna play all our hits really really loud.” For someone like me, who is familiar with the band but who has never seen them live before, this is basically the perfect tour.

And in fact it was one of the best concert experiences I’ve had in a while, and also pretty much everything I would have expected an Iron Maiden concert to be: Loud, fast and ridiculously over produced. Every song in the set — every song — had its own set design, which included but were not limited to stage-spanning murals, lighting and inflatable objects including full-sized Spitfire fighter planes and oversized (one assumes) demon heads. Bruce Dickinson changed costumes to match and ran around the stage in a way the would have exhausted someone half his age — I watched him scamper (yes, he scampered, from time to time) and figure he probably burned 10,000 calories as I watched. That he could do it, and still maintain is operatic bellow through a two-hour set, was nothing short of remarkable.

The rest of the band didn’t go in for changing clothes but were otherwise committed to their own shticks, which included bassist/guy in charge Steve Harris sprinting all over the stage, and guitarist Janick Gers putting his leg up at the height of his own head, I assume just to prove that at age 62, he still could. Good for him. Everyone in the band is in their early 60s (except for drummer Nicko McBrain, who is 67), and they torched everyone’s face off with their energy. They put on a show. They don’t pretend to be young — Dickinson made a few jokes at the expense of the band’s collective age — but they do offer an example of how to age well, doing the stuff you enjoy (or at least, that lots of other people enjoy).

The short version is that I’m pretty sure that even if I had not enjoyed the band’s songs, I would have enjoyed their over-the-top stagecraft, and their commitment to entertaining. Not every musical concert in the world has to be this sort of overstuffed silliness, but if you’re going to go that direction, then, yes, this is a very good way to do that sort of thing. You don’t have a lead singer dual-wielding flamethrowers while singing a song about Icarus if you’re not fully engaged with the concept of showmanship.

I mean, come on pic.twitter.com/E8LkaBRuwx

I’m pretty sure Iron Maiden at this point is aware of their place in the metal genre, and in rock n’ roll, and doesn’t feel the need to prove themselves to anyone. They know they’re at the top of the heap and will stay there for as long as they care to. What I like, and what I saw last night, is that their reaction to this knowledge is to keep putting out the effort. A “greatest hits” tour is a lovely excuse for a band to phone it in; they know the music, they audience knows the music, the buy-in is there, and everyone would have been happy with relatively minimal effort. But the band knocked it out of the park anyway. As a creator myself, it’s a reminder not to settle just because you know you can.

And as a “greatest hits” package it was, well, pretty great. From a personal point of view, they played all the songs I wanted them to play, except one (“Wasted Years” from Somewhere in Time), and I won’t begrudge them that one song because they’ve been around for 40 years and there’s only so long they can stay on stage. For the record (pun intended) I really do appreciate when bands that have been around for a long time still put out and tour on new music. But as noted earlier, for a longtime fan who had not yet seen the band live, this was a very fine tour to catch up with Iron Maiden.

So, yes! Now I’ve seen Iron Maiden and it was everything I wanted it to be. This was not surprising to me, but still gratifying.

62 Comments on “An Evening With Iron Maiden”