It’s undergoing a name change, to the Astounding Award for Best New Writer. All the details are here.

I don’t know if the name change is retroactive, but I gotta say I wouldn’t mind being known as an Astounding Award winner.

It was Jeannette Ng who made this happen by speaking up, and also the folks at Dell Magazines, who sponsor the award, for listening. Good on each. This is a good outcome to what could have been a drawn-out and contentious issue, and I applaud it. 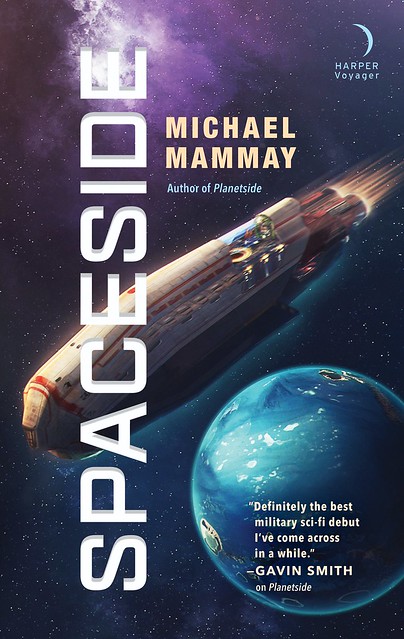 It’s easy to be a hero — sometimes. In Spaceside, author Michael Mammay examines the other side of being seen as heroic, and what it can do to a character (and the story they’re currently in).

Spaceside is a sequel. It stands alone, but it takes place after the events of Planetside, and features the same main character. The Big Idea with this book was to incorporate the impact of the events of Planetside, both in the world and on the main character. I can’t tell you too many specifics without spoiling the first book, but suffice it to say that in Planetside, Big Things happen. Things that get galaxy-wide attention. When Big Things happen in life, the impact lingers, but I think sometimes in sequels we’re ready to move on to ‘the next big adventure’, so those things from the first book slide into the background.

But when Big Things happen, there are always lasting effects. At the end of The Lord of the Rings (The movies more than the books, but somewhat in both), after they get the win, we see everybody back at the shire, and they’re celebrating, and everybody’s happy. We don’t see Frodo looking over his shoulder, worried about lurking Nazgul. We don’t see a tour bus full of middle-earthers driving by in hopes to get a glimpse of the celebrity who saved the world. We don’t see protestors with signs calling him an Orc Killer.

In the real world all those things happen.

Are there any universal heroes at this point? For every well-known figure who is a hero to one group of people, there’s another group of people who hates them. Probably a big group. Writing someone who is universally seen as a hero or a villain felt false to me, so I tried to capture that in Spaceside…the dichotomy where a hero to one person is a villain to someone else.

When I see Luke Skywalker hiding away in the corner of the galaxy…to me, that’s very real. Can you imagine the eyes on him? The people asking him to do things? The pressure every time he just wants to walk down the street to Space Starbucks? (Incidentally, why are there no Space Starbucks? Where are the tacky chain restaurants in science fiction? But I digress).

Colonel Carl Butler, the main character of both Planetside and Spaceside, doesn’t have the option to hide away. Beyond that, he’s got his own issues stemming from what he did, and he’s not necessarily doing a great job of dealing with them. He’s in therapy, which helps, but he can’t go out in public without people staring at him, which keeps putting it in his face. He also drinks a lot. When echoes of what happened previously start to turn up, it’s only a matter of time before he implodes. He doesn’t trust his own judgment, and he can’t tell if he’s imagining things or if there really is a conspiracy.

He eventually does have to deal with the thing in front of him. It wouldn’t be much of a novel if there wasn’t a new conflict. But he’s also still stuck dealing with the thing behind him, and it gets harder and harder to separate one from the other.

It made me happier to write this book than the first one. That doesn’t mean it’s better, but it does mean it’s more personal. As a former soldier myself, telling the story of someone dealing with what they’ve been through was something I really wanted to do. Those aren’t stories that make headlines, but they’re real stories that people are living. I’m not sure I’ve done them justice, but I definitely gave it a go.