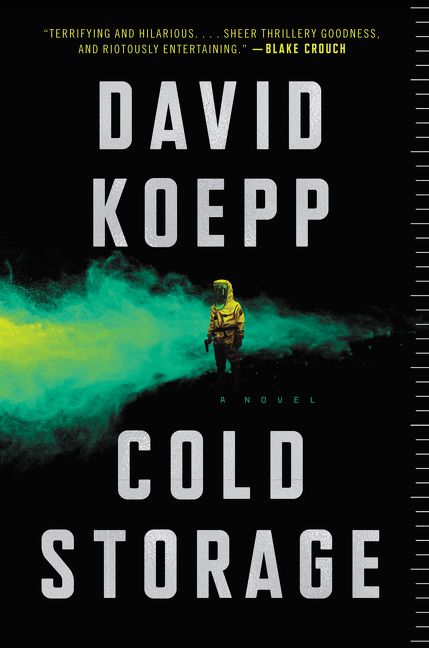 David Koepp is already one of the most successful screenwriters of all time, with films like Jurassic Park, Spider-Man and one of my personal favorites, Death Becomes Her, to his name. Now he’s turned his attention to novels with the bio-thriller Cold Storage. Koepp is here to tell you how the novel began, and why this time it is a novel, not a screenplay.

New York City, as is its habit, pushed the big idea in front of me, disguised as a very small one.

I was walking down the street in mid 2017, up early on a steamy August morning. It was only 7 a.m. but the city was sweltering already, and walking the two blocks from the deli to my apartment had covered me with a thin sheen of yuck.

It was the look on the guy’s face that I noticed first. He was a Hispanic guy in his mid-twenties, thin and looking exhausted, dressed in a security guard’s uniform. I figured he was on his way home from the night shift. Then again, it was 6:30 in the morning, so he might have been up early. Coming or going, his expression told me he hated his job.

I thought back on jobs I’d had and hated when I was his age, and that despite my loathing, I was grudgingly grateful to have had them. Maybe this guy felt the same way. I wondered, if something weird happened at his boring-ass job that night, what if he decided that, even though it was a shitty job, it was his shitty job, and god damnit he was going to do it well.

That’s a guy you could tell a story about.

All my ideas for the past thirty years have come in movie form, so I assumed this one was a film as well. I collected string for a few more months, waiting for other parts of the story to pop into my head from my daily life – a mysterious beeping smoke alarm somewhere in the attic that took weeks to find, my own fears of infection and decay – and then I sat down to start throwing words at it.

Movies often begin as treatments, horrible documents that reflect neither good prose nor good screenwriting but are more a summary of what a script could be. For some reason, after the first couple sentences on this one, I couldn’t face working in this-happens-and-then-that-happens form for the umpteenth time and decided to try it as half-decent prose. I think that because the story originated as a character idea – a hard-working, resentful but earnest young man trapped in a polyester shirt on a hot August morning — the telling of it began as thoughts inside someone’s head.

Yowza, what a difference.

In thirty years of movie writing, I’d never written a character’s inner thoughts before. Lame, but true. The script writer is limited by the tools of the medium, able to write only what an audience sees or hears. If a character doesn’t see, say, or do it, you can’t get it in your movie. The lucky writer of prose, by contrast, gets to write anything, anywhere, anytime. Thoughts inside a person’s head? No problem. The point of view of an inanimate object, like a deadly fungus? Sure, go right ahead, sounds cool.

And the pace of a book! Movies are slaves to plot, they thrive on constant forward movement. Tarantino digresses for ten or twelve minutes and everybody loses their mind; we’ll be talking about his boldness for decades. But in a book, an author can wander off in any direction at all, like a four-year-old chasing a butterfly in a meadow. The reader will usually hang with it. Mostly, the butterflies I chased were the inner thoughts and feelings of that night shift security guard.

Maybe I got him completely wrong. Maybe he loved his job and just didn’t like the heat. Maybe he’d just started his own private security company and was overcome with responsibility, or maybe he STOLE the uniform and had left the real guard dead in a doorway somewhere. All I had to base my 300 pages of assumptions on was the look he had on his face in a single moment.

In the couple years since the moment that sparked the book, I’ve had time to think about the big idea lurking behind that chance moment of passing, the question raised by that flash of perceived insight into the life of another person.

How come we don’t know each other anymore? Our communication is broken down, despite unprecedented ability to get our thoughts out into the public discourse, and to read and hear the thoughts of others we might not agree with. Of course, we don’t read and hear them, we click away at the speed of light, and because we can’t see their faces, we’re never forced to wonder what makes them tick.

But the city knows better, it pushes us into each other’s paths. The city said “hey, check out this guy,” so I did; it asked “what’s his deal?,” so I wondered.

I hope your day at work was unshitty, dude. With zero deadly fungal outbreaks.