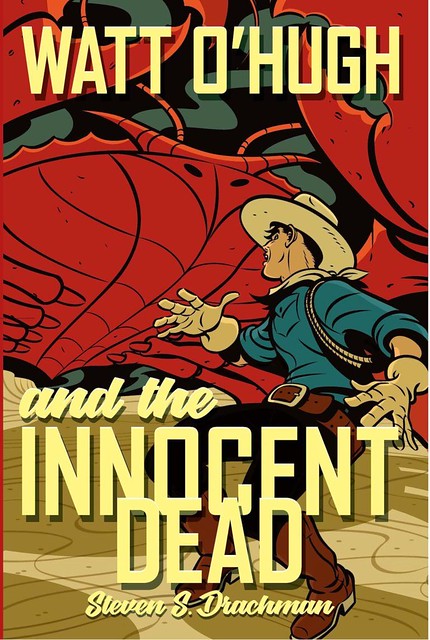 In today’s Big Idea for The Innocent Dead, a famous Muppet is revealed to be a master of teleology by author Steven S. Drachman. And that’s not the wildest idea on display today!

My Watt O’Hugh books (they’re now at long last a “trilogy”) are about a time-roaming 19th century gunman and his seemingly hopeless battle against a magical, secessionist, Utopian movement known as the “Sidonians.” The Sidonians, and their showy ruler, are responsible for the deaths of those Watt has loved, and are to blame for the shambles that his life has become. Shortly into the third book, this obsessional fight takes Watt all the way to the Hell of the Innocent Dead, the 6th level (out of a total of 18).

It is a land born from Chinese mythology, where those who die before their time go to await justice. It’s not the worst possible Hell: no one is on fire, but everything smells really bad, it’s damp and always just a little bit too cold, and the food is awful. Still, it is terribly unfair, a torment for someone who has really done nothing wrong, who simply cannot leave behind the terrible injustice of his death, who haunts the living when he sleeps.

But it is something more, too. It is not just a place, but an idea.

“Hell was invented by humans,” a long-time denizen explains to Watt. “Somebody thought of that and someone believed it. And here it is.” (He unwittingly quotes Kermit the Frog, who seems to have had a good grasp of the nature of Hell.)

The idea that consciousness plays some kind of role in the life of the universe is an old and appealing idea; and it is also an unprovable one, at least until we learn, Doolittle-like, how to talk to electrons. Still, physicist Arthur Eddington once announced, “The stuff of the world is mind stuff,” and, as the New Yorker writer Jim Holt noted in Why Does the World Exist, this opened a whole panpsychist Pandora’s box of philosophical musings (and some scientific musings as well, notably by Roger Penrose).

If the stuff of the world is mind stuff, and our consciousness comes straight out of the stardust that swirled about during the Big Bang, then you are really not an insignificant fleck of sand in an indifferent universe of two million quintillion planets. Instead, every atom is conscious, and we are all part of a single, universal thought.

So, in my tome, the 6th level of Hell still exists in the 19th century, because somebody thought of it long before, and the rest of us believed it, and it will be there until we collectively come up with a better theory, and prove this better theory. The superstitions of the past are not things we proved false and outgrew; they are things that used to be true and are not true anymore. At one time, in other words, there were turtles all the way down, and the stars in the sky were just pretty lights.

“We were eternal,” says Billy Golden, a colleague in the anti-Sidonian resistance. “At one ‘time’ you — we — were half-Divine. Then, we still danced with eternity. Beauty still existed, then. Now we are chromatids and centromeres, and our ‘soul’ is nothing more than ‘subjective experience,’ a part of evolution, a necessary survival mechanism. Look what we gave up when we rewrote the story.”

But a made-up reality that might change under your feet is a no-less deadly reality. So Watt is chagrined but not surprised to discover that the Sidonian rebellion is full-blown even in the 6th level of Hell, where he is soon designated a “general” as the battle approaches.

In the world of Watt O’Hugh, we’re all helping the universe decide what it wants to be when it grows up. And the Universe, as with any sentient, conscious creature, will either grow up to be “good” or “bad,” live a long life or die young.