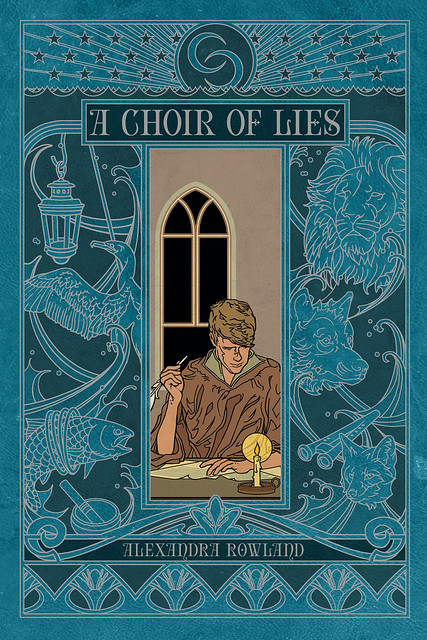 Tulips, bitcoin, fantasy worlds — how to each relate to the other? Alexandra Rowland knows, and in their Big Idea for A Choir of Lies, they are happy to lay it all out for you.

From November of 1636 to February of 1637, the Netherlands was gripped by the climax of tulip mania, the world’s first-ever economic bubble, and then a sudden crash of the market. At the height of the mania, a single bulb of the Viceroy tulip (which was not even the most expensive variety) sold for 2500 florins, more than $34,000 in today’s money.

From November of 2017 to February of 2018, the internet watched the rise and fall of the bitcoin bubble. There were rumors of people making their fortune because they’d bought into bitcoin years ago for pennies, and of people taking out mortgages to buy-in once the boom hit, then losing their homes when the bust followed.

And in November of 2017, I blithely started writing A Choir of Lies, a novel about fantasy tulip mania, thinking that it was going to be about something very obscure and difficult to explain to people. I wrote the fictional boom during the real boom, and the bust during the bust. To my enormous chagrin, I delivered the first draft to my editor at the beginning of February, 2018.

Yeah, I got nothin’.

Economics is a funny thing. Most people don’t understand it, so they think that it’s dull and boring. It’s supposedly about money and numbers and rules, and we hear a lot of pompous people using terms like “trickle-down” and talking about “the free market” with the same hushed reverence that some people use to talk about their god: An abstract and unknowable force to be worshiped and revered, which moves in mysterious ways and demands that we behave according to certain laws and principles or else.

But, like all the rest of our religions, economics is more about people than anything else. It’s just humans being human really, really hard at each other. We came up with “rules” of the “free market” based on simple observations of how people tend to behave in certain situations, and then we sort of… forgot that it was about them. We talk about the movements of money without thinking enough about who is moving it and why. This causes a ripple which turns into a tidal wave, and before you can think better of the whole sorry affair, you end up with late-stage capitalism and a bunch of CEOs who sweat and agonize about profit margins and, every decade, forget a little more that at the end of the day, it’s still just about people, and that people are important.

A Choir of Lies is narrated by Ylfing – if you’ve read A Conspiracy of Truths, you already know him: the sweet apprentice storyteller with a heart as big as the world. In the wake of the events of the first book (which you don’t need to have read to understand this next one), Ylfing is struggling with his relationship to his calling. He has seen stories used destructively, and he’s lost his connection to his audience. To escape having to tell stories, he takes a job as a translator to a wealthy merchant, Sterre de Wayer. However, as soon as she finds out the real extent of his skills, she persuades him to use those skills for her own ends and fan up a mania for her most recent import: bulbs of stars-in-the-marsh, an exotic bioluminescent flower. Ylfing can do what he does because he knows people. He knows that they will devour stories like a pack of ravening wolves. That’s all that marketing is—feeding your audience a story that whets their hunger instead of sating it.

The big idea for this book might seem fairly dry at first glance—a fantasy novel about economics? Really? YAWN—except that when I say that this is a book about economics, I mean that it’s a book about hunger and desire, about floods and famines, about how we determine our values (in every sense of the word—our worth, our cost, our morals). And, of course, woven through every line of it, it’s a book about… people. Just people being people as hard as they possibly can, with everything that that entails—the capacity for great kindness and self-sacrifice, the capacity for great greed and selfishness, and for the ability to hold those two contradictory impulses simultaneously in one hand.

Economics isn’t boring at all, it’s fascinating. It is as fascinating as political intrigue or comedies-of-manners or religious persecution or war, because all those things too are just people-being-people, coming up with intricate rules of a game that they’ve decided is terribly, terribly important, and then forgetting that that they can make new games with new rules, if the old ones no longer suit.

At the heart of the game of Economics (Late-Stage Capitalism Expansion Pack) is the idea that money is the most important resource. The big idea of A Choir of Lies, in one sentence, is just a question asked very softly: “But what if it isn’t?”