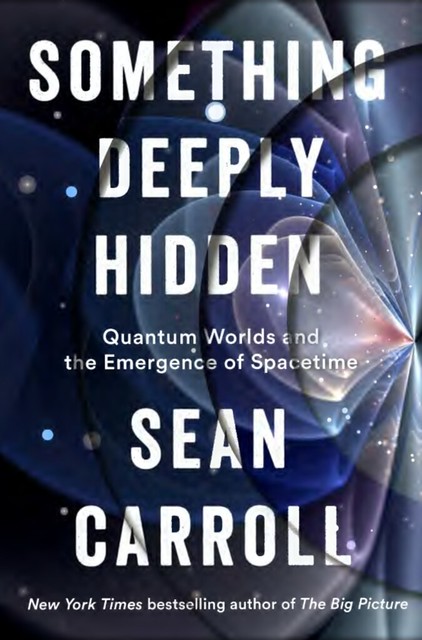 I’ve been aware of the “Many Worlds” interpretation of physics for some time — longtime readers of mine know it’s intimately connected with space travel in my “Old Man’s War” series of novels. But in the real world, how does it connect to the actual physics we know and (profess to) understand? Actual physicist Sean Carroll knows, and in his new book, Something Deeply Hidden, he delves right into it.

If there’s one thing the world doesn’t need, it’s another book on quantum mechanics. I mean, who hasn’t written one? In preparation for writing Something Deeply Hidden, I searched on Amazon for books with titles of the form “Quantum X,” and was rewarded with Quantum Eating, Quantum Touch, Quantum Leadership, and many more.

The existence of these books reflects the widespread conviction that quantum mechanics, however scientists might think about it, is fundamentally profound and deeply mysterious, so it could mean just about anything. You might expect to find a countervailing stream of books by sober-minded physicists and science writers, doggedly explaining that quantum mechanics isn’t really all that inexplicable after all. It’s science, not mysticism.

That’s not exactly what you find. Sure, there are valiant attempts to dispel the worst kinds of quantum woo. But even the most hardnosed quantum books seem to agree that the subject is unavoidably murky, something so bizarre and ill-understood that it’s not meant to be grasped by mere human beings. This or that quantum phenomenon is trotted out, accompanied by an implicit shaking of the head – “Can you believe it? This makes no sense at all!”

So my big idea for Something Deeply Hidden was: quantum mechanics is understandable.

To be clear, the challenge is not just that quantum mechanics is complicated or recondite, like general relativity or the standard model of particle physics. It’s that physicists themselves, who are supposed to be experts, don’t understand it, and in their more honest moments they admit it.

Quantum mechanics sits at the absolute heart of all of modern physics; it’s the deepest, most important idea that physicists have. But what we teach our students, as philosopher Tim Maudlin has put it, is a recipe, not a theory.

We can set up a quantum system, like an electron orbiting the nucleus of an atom. And we can measure something about it, like its position. The quantum recipe tells us the probability of getting any particular measurement outcome. And that recipe has been tested to enormous precision, and has come through with flying colors every time.

What we can’t actually tell you is what happens when you measure a quantum system. What counts as “measuring”? How quickly does it happen? Do you have to be conscious?

All of these questions are, in the standard textbook formulation, left entirely vague. The resulting recipe is good enough for government work, or for building incredibly complex technologies, but it falls well short of the clarity and rigor we would expect of a well-defined scientific theory.

Thus, in the words of Richard Feynman, “I think I can safely say that nobody understands quantum mechanics.”

At least, nobody thinks that other physicists understand quantum mechanics. Some of us, including myself, think we do understand the basics. The problem is that there is more than one honest, rigorous physical theory that reproduces the textbook quantum recipe in the appropriate regime. So we have multiple approaches, and have to decide which one is the best description of Nature; but that’s what scientists are always supposed to do.

So in the book I explain my favorite approach to quantum mechanics, the Many-Worlds formulation. It has a bad reputation, as it sounds a little science-fiction-y, or at least like you’re tacking on a bunch of extra stuff (entire universes worth) just to solve an irritating problem in quantum measurement. But the truth is the opposite: the theory is lean and mean, getting enormous mileage out of very few basic assumptions. The extra worlds are predicted by the theory, not tacked onto it.

One of the goals of Something Deeply Hidden is to make all that clear. But the broader, more important message is the one above: that quantum mechanics is understandable. Maybe my favorite understanding will turn out to be the right one, or maybe one of the various competitors. But they’re all ultimately intelligible, not ineffable.

It took me a while to come to this conclusion. I didn’t start out to be a rebel, fighting against the entrenched establishment of physicists who don’t want to face up to the quantum measurement problem. But the more I’ve worked in the field, and the more I’ve thought about it myself, the more irritating and embarrassing it is that we haven’t figure out quantum mechanics once and for all, and for the most part we haven’t even been trying. I’m hoping my book does its small part in changing that.