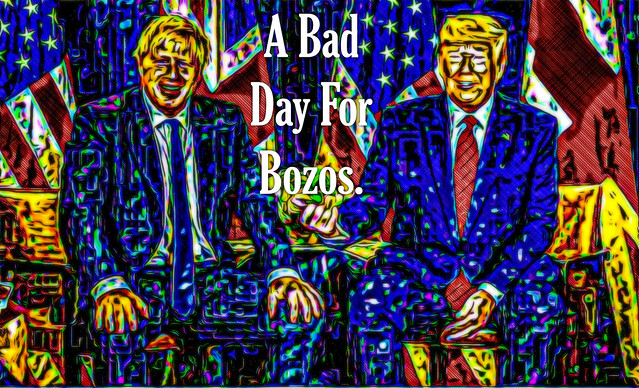 The working day started off with Boris Johnson’s proroguing of parliament called unconstitutional in an 11-0 decision by the UK’s Supreme Court, and finished off with Speaker Pelosi announcing a formal impeachment inquiry against President Trump, because it appears he tried to blackmail a foreign power to go after his political opponent. Which is not great.

In between all of that, I ate nearly an entire loaf of banana bread all on my own. Because it was delicious.

What are my thoughts on today’s excitement? Leaving aside the banana bread, and in no particular order:

* First: good. Both of these awful men deserve the abject humiliation they’re getting heaped on them this day, and both for the same reason — because they want to rule, not lead, and don’t actually care much for the rule of law. I like the idea that the rule of law has risen up and, like the owner of a particularly pernicious yappy dog, given them a hard swat on the nose with a rolled-up paper, that paper in each case being their respective countries’ constitutions. I’m not going to get too excited yet. But on the other hand, if we ever do get to the point to where both of these embarrassments are out of office and possibly in jail, it’s nice we have a specific day to point to as the official Beginning of the End.

* It’s a worse day for Johnson than Trump, which is a genuinely remarkable statement when you realize what a bad day it was Trump. But while both men are now firmly on the hook, Trump at least has some play in his line, and I don’t see how Johnson does at all. Johnson was given one job by his masters: Effect Brexit before all of them have to account for their offshore tax shelters. He’s bungled that one rather definitively, and at this point it seems unlikely that the UK will exit the EU on Halloween, despite Johnson’s best efforts. Which means another extension, more defeats, so on and so forth.

Bear in mind, I’m talking out my ass here, since I’m not British and there are almost certainly nuances I’m missing, and also, it doesn’t seem Mr. Johnson’s political opponents are particularly well organized or offering a better plan. Johnson may yet pull something out of his ass that isn’t immediately slapped down by Parliament or the courts. But in his very brief tenure as Prime Minister, Johnson still hasn’t managed an actual victory, and getting one as regards Brexit (or getting his opponents to let him have an election before Halloween) doesn’t seem likely for him now. He is a historic failure in the job.

* Back here in the US, folks on the left have been riding Nancy Pelosi on the subject of impeachment basically since the moment she got the gavel back, and are exasperated that it’s taken her this long to start an inquiry. I certainly sympathize, since Trump is objectively a terrible president, incompetent as balls and also corrupt in a way we haven’t seen in the White House in most people’s lifetimes (yes, even worse than Nixon). But Pelosi isn’t stupid, and she knows a thing which people on the left sometimes forget, which is that impeachment isn’t actually popular with most Americans, and also, Republicans, while institutionally corrupt, are both not actually stupid, and also really good at winding up their base about how THEY ARE UNDER ATTACK FROM THE SOCIALIST FEMINIST PELOSI AND HER ALLIES IN THE FAKE NEWS. Pelosi also knows that no president that’s been impeached has been removed from office, and that when Clinton’s impeachment trial was done, he was more popular than when it started.

All of which is to say that I suspect Pelosi recognizes, more than most people, the political hazards of an impeachment inquiry. They are significant and they are substantial, and, bluntly, if the Democrats fuck it up, they hand Trump a gift going into an election year… and we all know what the capacity of Democrats to fuck up even sure things is. She also recognizes that the Senate is in Republican hands and that in these benighted days, the chances of them removing a Republican president, even one as manifestly corrupt and incompetent as Trump, are slim approaching none. So the only realistic victory scenario here is to have an impeachment inquiry come up with something that is so unambiguously corrupt and unlawful that when the Republicans in the Senate vote to keep Trump in the White House — and they will — they slit their own political throats in the process.

Which is, uhhhhh, a lot.

So while I’m delighted that Pelosi has finally pulled the trigger on an impeachment inquiry, I am from a purely realpolitik view sympathetic regarding her reluctance to do so before now. And even now it’s far from a slam dunk. Does it feel good right now? Sure! Because Trump is objectively terrible, incompetent and corrupt. But I think people on the left really should understand how narrow the victory lane is here, and what lengths Trump and the Republicans will go to in order to keep him where he is, and their own grip on power. None of this is going to go the way you hope it will.

* For all that, I would like to believe today represents the first break in the authoritarian bullshit fever that anglosphere politics seem to have suffered over the last few years. Again, I’m not going to get too excited, and even a best case scenario has things getting rather messier before the real cleanup can begin. But I’ll take the day for what it is and see where we go from here.

← The Big Idea: Annalee Newitz
And Now, To Celebrate a Haircut, We Present Two Sides of John Scalzi →