The Thing I Splurge On, Travel-Wise 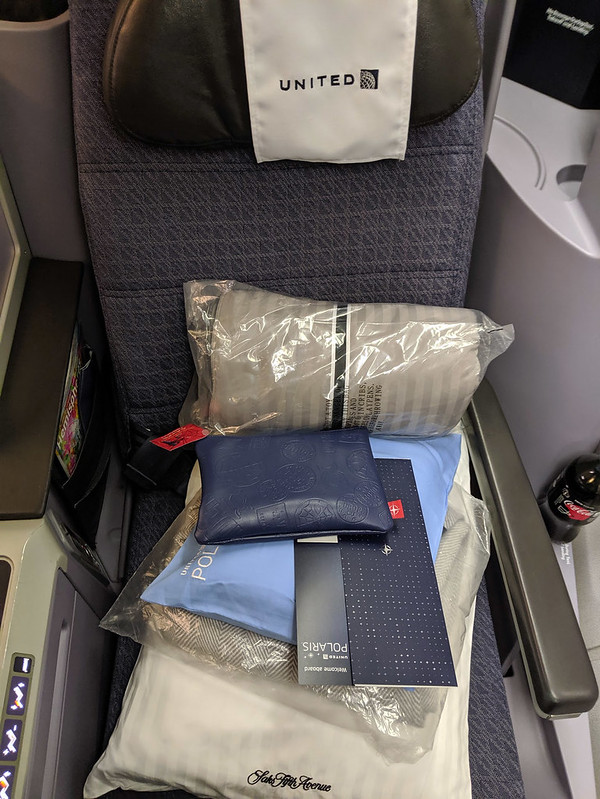 Tomorrow I start on a week-long trip to Australia, the itinerary of which goes as such: Dayton to Houston to Auckland to Melbourne to Canberra. It will take over 40 hours, and includes an epic 11-hour layover in Houston because, well, that’s just how these things work sometimes. The length and general nature of the trip is such that it’s a good time to note my general travel policy these days, which is:

If there’s an ocean involved, when possible, buy a lie-down seat.

I should note that for domestic flights, I almost never pay for business class seats. One, what domestic business class gets you is a little extra width in the seat, some extra leg room and free booze, which as a short-legged five foot seven teetotaler is not the value proposition it might be for others. And the flight is rarely more than four hours in any event. For domestic flights, premium economy is my sweet spot. If I ever get a business seat domestically, it’s because I was automatically upgraded for some reason, or because when I got to the sign-in kiosk the upgrade was available for $50 or less. What can I say, I’m a cheap bastard.

But in the last couple of years I’ve changed my tune when it comes to overseas flights, and I splash out for a seat that reclines all the way down, which means business class at least. Why? Well:

1. Because these flights are ridiculously long. A transatlantic flight from the US is seven to ten hours. A transpacific flight is anywhere from ten to eighteen hours. The Houston – Auckland leg of my flight tomorrow is fourteen hours and forty five minutes. An economy or economy plus seat is perfectly fine for a four-hour flight. For one that’s three times as long? Well, I’d rather not, if I can avoid it.

Also, in this particular case, the flight leaves Houston in the evening, which brings us to the another point:

2. Some people can sleep sitting up, but I am not one of them. Believe me, I’ve tried. The best case scenario has me entering a fugue state that is not quite awake but also not really asleep, which means I arrive at wherever I’m going in a condition that’s best described at “full bwuh?” I’m old now and pulling out of that particular condition is more difficult than it used to be.

However, when I have a lay-down seat (or at least one that reclines significantly) I can get some actual sleep. Is it great sleep? Well, no, it’s on a plane in a narrow bunk with not-amazing padding. But it is adequate sleep; enough that when I’m done with my travels I don’t feel like I’ve been worked over with an airplane. Also:

3. Access to airport lounges. Mind you, I often have access to these already: my American Express gets me access to the Delta Sky Club when I fly that airline, and to its own Centurion Club, and I also paid for a United Club membership this year. But when I don’t already (for example, when I fly United), or when having a business class ticket gets one into a different, slightly better lounge (for example, the United Polaris lounges), it’s very useful. Sitting at an airport gate is rarely a fantastic human experience, because the seats are not really comfortable and there’s usually a scrum for electrical outlets; airport lounges are usually at least slightly more civilized.

These lounges makes a real difference for when you have, say, a ridiculous 11-hour layover in Houston. The Polaris lounge there has showers and daybeds; so does the Centurion Club. They lay out food and drink for no additional cost and every seat has its own power source. And most people in the club are somewhat less stressed and aggravated than they would be at the gate. It makes a real difference in how one feels even before one gets on a plane for a very very long trip.

(Also, to pre-empt the “you’re gonna be there for 11 hours, go out and see the city!” suggestions — well, and in fact, I may; Houston’s a nice town. But also let’s not pretend that leaving a major airport for a day trip, and then getting back in, is not without its own set of logistical challenges, and even then, I’m still going to be spending a large amount of time at the airport anyway. So the thing about airport lounge access still applies.)

4. Because people start getting weird and cranky on long-haul flights (me included). Which makes sense, most humans are not designed to stay in one position, more or less, for hours and hours at a time. It’s enervating and antsy-making, no matter how much you sleep or do the airline-recommended exercises to avoid deep vein thrombosis. Also eventually people’s sense of “I’m in a public place, I should behave myself” seems to disappear, and then comes the nose-picking or porn-watching or the furtive eating of an egregiously stinky meat pie out of a cloche hat (which I swear to god is a thing that a seatmate of mine did on a flight from Australia back to the US, when I was sitting in economy).

5. Because paying for the lie-down seats just plain makes air travel more civilized. The airport lounges and the getting on the plane first and the not having to fight for overhead space and the blankets and pillows and eyemasks and earplugs and the actual food and drink anytime you want it and the not wrestling someone for the goddamned armrest and the airline attendants actually being attentive and the, let’s not forget, ability to put your seat down and just maybe sleep for a change makes a difference. I’m not going to pretend that the 40-hour trip I’m about to take is going to be happy bundle of joy from start to finish, but, look. I’ve gone to Australia economy class before. I know how much the experience varies between these two states of travel. Likewise other long-haul travel.

And yeah, it does suck that the difference is as significant as it is. In a just world everyone would have lie-down seats and tolerable airport experiences. I’m well aware that I’m getting out of a certain level of travel hell simply because I have the wherewithal to do so. Not everyone has the option. It’s privilege, bluntly, and I acknowledge it.

And in this particular case, I’m okay exercising it, because the other option (I mean, aside from not doing the travel at all) is hours of discomfort and aggravation, and a certain number of hours at the end of the travel recovering from it before I am a useful human once more. At this point in my life there is a specific financial value that I can assign to not feeling that way, and most of the time, it’s one I’m willing to pay (and even more so when I’m traveling with Krissy, for whom long-haul travel is even more taxing).

It’s nice to be able to do it. I recommend it, if you can afford it, and have been on the fence about it. Splurge, it’s mostly worth it.

50 Comments on “The Thing I Splurge On, Travel-Wise”