Thoughts on Gemini Man, and its High Frame Rate 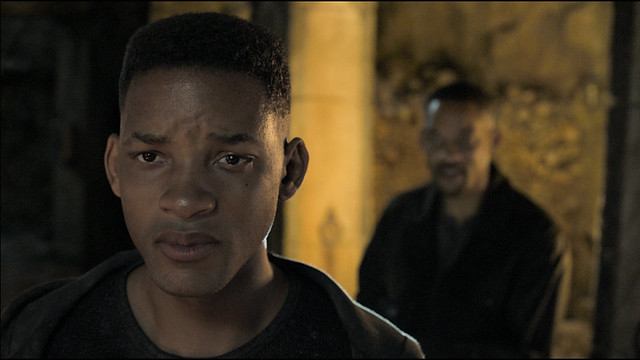 My daughter asked me if I wanted to go see Gemini Man with her last night, and I did, not because I thought it would be gripping action film with just a tinge of science fiction (which is what it’s promoted as), but because I’m a cinema nerd and director Ang Lee shot the film at 120 frames a second, i.e., a much higher rate than the standard 24-frames-per-second that is used for the usual cinematic outing. I wanted to see what it looked like, and whether it would add anything to the experience.

The personal answer to this question: well, I thought it looked cool, anyway; and no, not really.

I’ll get to that in a minute, but first, the story: Will Smith is a 51-year-old assassin who feels he’s lost a step and wants to retire, but of course when you’re a professional assassin you can’t just retire, so the government, in the form of Clive Owen, sends an assassin to take him out, an assassin who just happens to be a clone of Smith’s character (this is not a spoiler, it’s all over the trailers and posters). Action scenes and bog standard plot twists ensue, and Mary Elizabeth Winstead and Benedict Wong are along for sidekick and comic relief duties respectively.

It’s fine. Director Ang Lee works beneath his level, but since his level is “two-time Oscar winner” it’s all still perfectly competent. The script has major holes in it but the movie doesn’t slow down to let you think about them, so that’s well enough, and the action scenes move along at an agreeable clip. Smith, Winstead, Wong and Owen are all attractive presences on screen, and the CGI’d younger version of Smith is credible enough both in physical detail and performance not to be distracting. It’s fine. Fine is fine. I don’t know that I will remember this movie a week from now, but while I was watching it I was reasonably entertained. Fair enough.

But for me, the thing I wanted to see was the high frame rate, and how it contributed (or didn’t) to the movie. There are purists who dislike movies being screened at higher than 24 frames a second because they think that 24fps is an essential part of cinematic grammar — it’s what gives cinema its “feel,” and higher frame rates make everything feel like a cheap soap opera. Personally, I’m meh on this; 24fps is a historical artifact, and there’s no particular reason to be tied to it these days, when nearly all theater projectors are digital and movies can be recorded and shown in higher film rates if the filmmakers want. Moreover, I’m pretty sure that younger people don’t see high frame rates as a negative; if they see something at 60fps or above, they don’t think “soap opera” — a reference which doesn’t mean anything to them since soap operas mostly don’t exist anymore — they think “video games.” And in video games, the higher the fps, the better. Why not the same in movies?

With that said, if you’re going to go out of your way to record your movie at a higher film rate, I think it helps to have a reason. I’m not tied to the 24 frame per second rate, but there’s nothing wrong with it, either. If you’re going to deviate from it — and call attention to that deviation — it’s worth it to have a good reason for doing so.

As far as I can see, there wasn’t any particularly good reason to go with the higher frame rate for Gemini Man. Yes, everything on screen moved more smoothly, and if you’re not used to higher frame rates, it can give the illusion of hyper reality. But the novelty of that wears off quickly enough, and then it becomes a question of whether the additional frames help with cinematography, or action sequences or special effects or anything else. And here, it didn’t, really. The action sequences, in particular, were not so complicated or choreographed that a higher frame rate added clarity to their execution; I suspect they would be have been equally effective at 24fps. I was aware of the additional smoothness in these scenes (especially the slow motion bits), but I wasn’t seeing how it mattered, aesthetically or functionally.

So, in the end, the higher frame rate of Gemini Man was… fine. The movie worked fine with it, and it would have worked just fine without it. It neither harmed nor added real value to the movie or the story. Does it make think that high frame rate movies are the wave of the future? Not really, no. It also doesn’t argue against the idea, either. It’s now just another tool in the filmmaker toolbox. Something they can do, if they want to, or not if they don’t. Like 3D, which, incidentally, I saw Gemini Man in, and which, like the high frame rate, neither added nor detracted from this particular movie and story.

This is the second film I’ve seen in theaters at a higher frame rate; the first was The Hobbit, which I went out of my way to see in “48HFR,” as it was advertised at the time. I liked it there and thought it suited the movie, but then I saw the subsequent Hobbit installments in regular 24fps and did not feel the lack of frame rate in any particular way. I’m still waiting for the movie for which a higher frame rate is actually critical for the cinematic experience. Maybe the upcoming Avatar sequels? Say what you will about Avatar, but for my money there was a distinct differential in experience between the 2D and 3D versions of that movie, and the 3D version was noticeably more affecting. I understand Cameron is shooting the sequels at 60fps, and if there’s any filmmaker who can make those higher frame rates pay off, it’s probably him. We’ll see.

In the meantime: Gemini Man is a perfectly adequate way to burn off two hours in the theatre. If you like Will Smith, it’s very Will Smithy. There are worse things.

28 Comments on “Thoughts on Gemini Man, and its High Frame Rate”