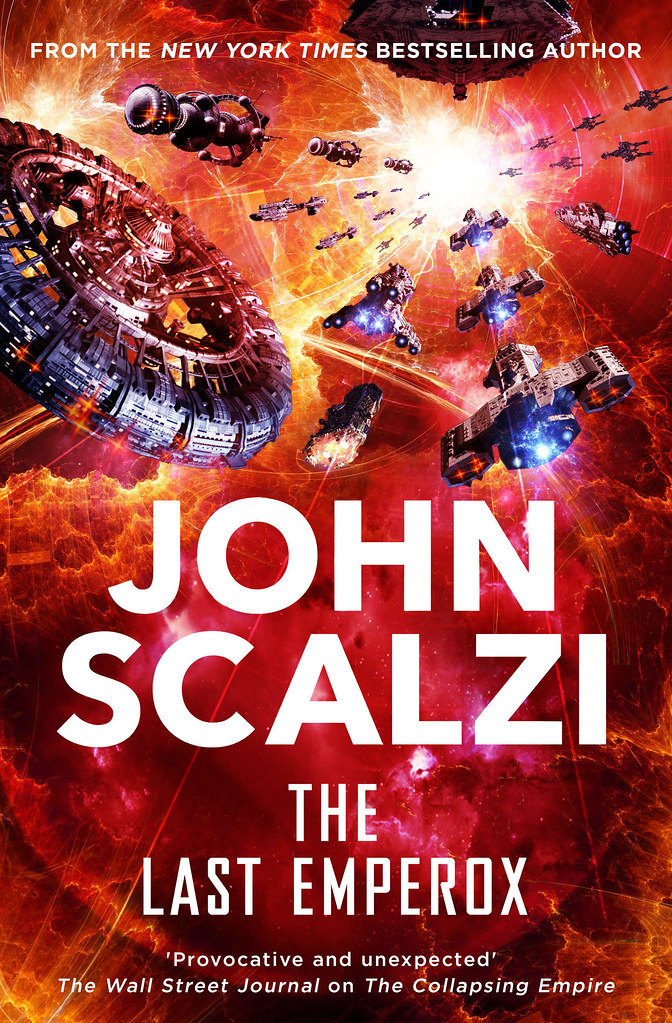 Now that it’s done, and because I think it’s useful and interesting for people, let’s talk a little about the process of writing The Last Emperox, and other things about the book. The following thoughts are in no particular order because, well, my brain is still a little mushy.

* I rather famously wrote TLE’s predecessor, The Consuming Fire, in two weeks. Did I do the same with The Last Emperox? No, and also maybe a little. The writing this time went a little like this: Nine months to write the first third of the book, three weeks to write the second third, and one week to write the last third, which includes an 11,000-word final day (which was yesterday).

This breakdown of writing time, i.e., first third slow, second third faster, final third in a rush, is actually not at all unusual for me. The first third of the writing is usually less about the typing than it is about the figuring out of the story and the characters and how they all fit together — this is the time where I spend lots of days staring out windows or taking long showers or looking up at a dark ceiling when a cat’s woken me up at 3fucking AM in the morning — seemingly pointless activity, but what my brain’s doing is problem solving.

The first third is also where I write a lot of stuff I don’t end up using, either writing what I thought was going to go into the book but eventually didn’t, or occasionally writing things so I can know it for myself, even if no one else sees it (sometimes I start writing the first but then it becomes the second). Writing that stuff out also takes up time.

After the first third, things speed up because by that time I know who the characters are, what they’re doing and where the story goes. There’s still the opportunity for surprises in terms of the writing, and for me to make substantial changes if necessary, but that sort of thing becomes increasingly rare the longer I’m in this phase.

With the final third, everything is locked, and the “writing” — plotting and story building — is done, so the only thing left is the typing. And I can type pretty fast.

So that aspect of the writing wasn’t and isn’t unusual at all. When I wrote The Consuming Fire, I did it unusually in that I did almost all the plotting and story building without physically writing. So when it came to do that, I did it all in one burst (which I don’t recommend because it meant me doing 8,000 words a day, which is neither physically nor mentally comfortable). This time, I did it more like I usually do it, and was not mentally/physically exhausted at the end of it. Which is a nice thing. Exhaustion is a lot.

* Except — well. I don’t usually take ten months to write one third of a book. What was going on with me this time that it took so long? Some explanations, which are different from excuses:

At the beginning of the year, the theory was that I would be finished with The Last Emperox in April or possibly May, which would leave lots of time for fine tuning, promoting and what not. Obviously, I failed at that. This frustrates me a great deal. I have been fortunate that the team at Tor, from Patrick Nielsen Hayden on down, have been uniformly great in dealing with my delays, and the book will be out when it was meant to be out. The thing is, I don’t want them to have to be uniformly great. I want for me not to be a problem child.

It also means some projects I wanted to get to this year had to be punted down the road, which is also frustrating. I’m 50 now, and there’s only so much more punting I get to take before certain things will have to fall off the schedule forever.

The short version of this is: I need to do better at focus, and also, please fucking vote against bigoted awful incompetent criminal chaos actors in 2020 if you want work from me on a regular basis, thank you and please.

(Please note that I am not looking for advice here — I get to deal with my own shit, and also, since you’re not me, your advice on one (or more) of these issues is not likely to be directly useful. Thank you for the impulse, but just don’t.)

(Also, if you’re thinking of commenting something along the lines of “hey at least you write faster than GRRM/Pat Rothfuss/Whomever hur hur hur” and I know some of you are, do me a real big favor and don’t do that shit. Because it’s not a contest, and I get sick of hearing that sort of crap and I’m not even them. Also they’re friends. Don’t dump on my friends and/or other authors here and think you’re complimenting me when you do it.)

* I am happy to say that, kvetching about lengthy gestation periods aside, I’m happy with this book. Intentionally writing a trilogy is a new thing for me — I usually just write a standalone and then put out sequels if people like it — so one of the things I was confronting with these books was pacing: not just within a single book, which is hard enough, but three of them. Patrick will let me know soon enough, but I think I pulled it off reasonably well.

I also got to have a lot of fun with the established series characters in this book. There was more than once when Krissy, who reads the book chapter by chapter as it comes out of my brain, yelled up the stairs “You did WHAT?!?!?” to me as she got to some particularly gnarly plot point or event involving the characters. And of course I would just sit here in my office and snicker when she did.

I won’t go into detail about what happens, obviously. But I will say I think it’s very much of a piece with the previous two books, and people who enjoyed those books will enjoy this one as well. And now that the trilogy is done people can enjoy the entire scope of the series. There are no cliffhangers in this one, I promise…

* … Although there are places to go if I ever come back to this universe. To be clear, this trilogy is this trilogy; it’s done and finished, and the characters in it go to their various endings. It’s not a spoiler in the least to say that the promised collapse of an empire is fulfilled. I don’t tease like that, folks. But on the principle of “waste not, want not,” there’s enough open space for me in this universe that I could return to it without disturbing the fundamental nature and character of the Interdependency trilogy.

Fun fact: This trilogy was originally sold as a two-book series, in which the empire collapsed entirely in the first book, and in the second book we come back to see what’s going on 5,000 years later. Things changed once I got into the writing, and the single book very quickly expanded into three. And that book about things five millennia later? Well. Let’s see how things go.

* TLE comes out on April 14, 2020 in North America, which means probably April 16 in the UK and territories served by UK publisher. Yes, there’s an audiobook (remember that I have a deal with Audible that mirrors the Tor deal, so if I’m publishing a novel with Tor I automatically am publishing with Audible as well, you don’t really have to ask at this point). I can’t confirm who the audiobook narrator is at this point but I would be deeply surprised if it’s anyone other than who it’s been for the other two books in the series. Obviously it will be out in ebook format as well.

(If you want to pre-order the book in your preferred format so you won’t have to worry that the crush at your local bookstore will overwhelm you, please do. You can do that at your aforementioned local bookstore, who will be happy to take your order, or you can do it with your favorite online retailer.)

I imagine there will be a book tour when it comes out in April, but I haven’t confirmed that yet, nor do I know the particular cities I will be visiting on the tour. The way to make it more likely that I visit your town is not to tell me you want me to come, but instead tell your local bookstore, because they’re the ones the Tor PR people talk to. Also, people outside the US/Canada, asking the tour to include you won’t work because Tor only publishes my books in North America, so they’re going to focus on this continent (and, honestly, mostly the US) as a matter of practicality. You’ll have to ask the local publisher of my work to bring me out and tour me (or suggest me to a book festival in your country).

* And for the people who want to know, yes, the TV adaptation of the Interdependency series is still in process, and I’m very happy with how it’s going so far, although I can’t give you any more details than that at the moment. Just remember it’s a very long process involving a whole lot of people, and there are a whole lot of opportunities for it to fall down a dark hole, because that’s Hollywood for you. The good news is, no matter what, you have the books.

* Indeed, that is the good news: You’ll have the books. Going back to the idea that this is my first intentional trilogy, there was something a little disquieting about the idea that I might get eaten by a bear or run over by a fruit cart or whatever, and because of that people would never know the fates of Emperox Grayland II or Marce Claremont or Nadashe Nohamapetan or Kiva Lagos. Now, no matter what happens to me, you will. Patrick has the manuscript, and the actual book making process has begun. So now I’m fair game for bears and/or fruit carts and/or bears pushing fruit carts. Come at me, Fruity bear merchants! I await your wheels.

49 thoughts on “Thoughts on the Completion of The Last Emperox”