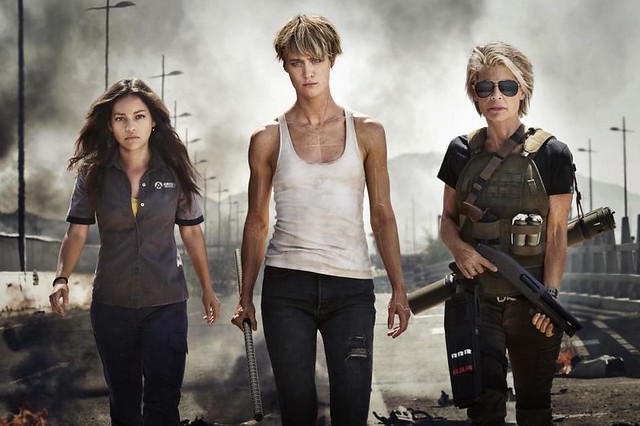 I’ll begin by noting that Terminator: Dark Fate director Tim Miller is a friend of mine, and that we’ve worked together on Love Death and Robots, so you’ll have to filter the following through that fact. Hey, disclosure is fun!

With that said, I was happy with this movie, which is what I wanted it to be: Lots of really nicely-done action, unstoppable killing machines, Arnold Schwarzenegger once again showing that being an actor with limited range is not a problem when a role is smack dab exactly in what little range you have, and most importantly, Sarah Connor.

As I walked out of the film last night I posted a five word recommendation of this film: “It gets Sarah Connor right.” This actually matters because despite the name of films, the “Terminator” films are about Sarah Connor, and the arc of her life dealing with the terrible fate that life has dealt her: Victim to fighter to avenger. Sarah Connor is realistically (within the context of these films) damaged by this fate of hers; particularly in this film she’s a PTSD wreck. And, well, she would be, wouldn’t she. It’s important that the Terminator films show her this way. It’s for better or worse the grounding the films need to make every other absurd thing that happens in them function on the level of plausibility.

People were pleased that Linda Hamilton was coming back to play Sarah Connor in this film, because she is iconic in the role — Emilia Clarke’s turn in the role in Terminator: Genisys was a decent cosplay of T2-era Hamilton that reminded me of how great Hamilton was in the role. What I like most about T:DF is that it doesn’t pretty up either Hamilton or Connor: She’s lined, she’s haggard, she’s old, and the character is not what you would call pleasant. Hamilton is 63 and in this film, at least, it’s not a Hollywood 63. I don’t think this counts as brave, exactly — ain’t nothing wrong with a 63-year-old woman looking her age — but I like that the film, and Hamilton, were perfectly fine with portraying Connor this way. The performance is the solid core of this film, and why this film is both the best Terminator film since T2, and also a solid capstone on Connor’s journey through this universe.

This film getting Sarah Connor right is important enough to me that I would be willing to overlook other issues with the film, but aside from one weirdly-janky CGI shot in the first act, this film hits most of its marks with confidence. As a director, Miller knows his way around an action scene, and the film doesn’t skimp on those. Generally speaking, Miller’s directorial style and sensibility is closer to James Cameron’s than the other directors in the series, which also helps in making this all-around the most credible non-Cameron sequel.

As the Terminator and Kyle Reese analogues in this film, respectively, both Gabriel Luna and Mackenzie Davis do their thing well. I was especially impressed with Davis, because my other experiences with her in film and TV did not show her as a particularly physical actor; she very credibly kicks ass here. Natalia Reyes is fine, although I found her character development a bit rushed. The script is trying to do a lot of things at once, and (probably accurately) assumes the audience is well familiar with the series as a whole, even the films (T3, Terminator Salvation, Genisys) this film retcons out of the timeline. I’d’ve been happy with a tighter focus. There’s some nice, unforced bits of humor I liked, most coming from Schwarzenegger.

Six films (and one television series) in, it’s worth it to ask whether the world needed yet another stab at the Terminator mythos. My response is: in this case, yes — because the arc of Sarah Connor was not yet complete, and the Terminator films are her story. Terminator: Dark Fate is the film that completes that arc. Which is makes it, of all the non-Cameron-directed films in the series, the only necessary one. For my own sense of completion, I’m glad to have it.

(Note: In the comments I’m going to trim out anything I think is an egregious spoiler inasmuch as it’s the first week of the film run, but there may still be some minor plot point discussion, so be aware of that. Also, if you’re gonna comment, try not to put in spoilers, thanks.)

← And Now, A New Short Story: The Origin of the Flow
What Authorial Agitation Looks Like, Scalzi Edition →