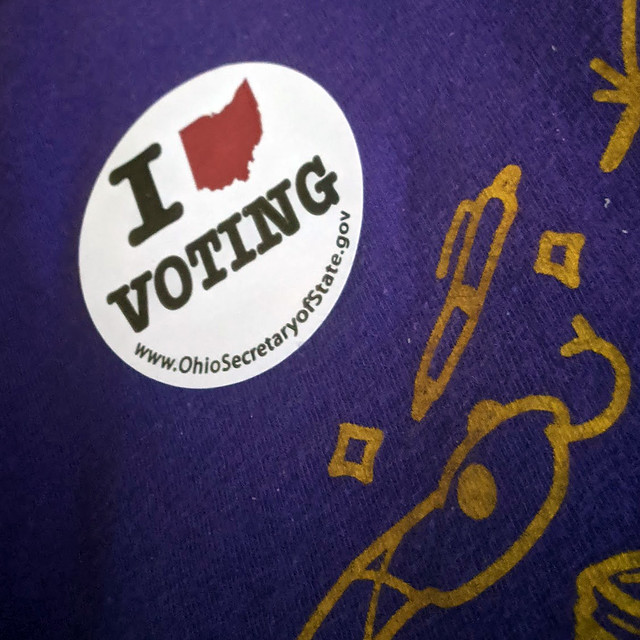 * First and most importantly, the only thing I could vote for this year that was competitive — a levy for a local career center — passed, so I feel pretty good about that. Also on the ballot were a couple of uncontested races for township representative and school board, both non-partisan positions and the people who were up for those slots were perfectly good. While philosophically I am against uncontested political races, as a practical matter, meh, it was fine. Around the Dayton area, voters passed every single school levy that was put to them, which I think is a positive thing.

One new thing this election was that my polling place had different voting machines — ones where the machine you voted on was not connected to the Internet, and which printed out your voting choices on a long strip of paper so you could physically confirm the choices before it was scanned and sent into voting box. I thought this was kind of the long way around for something you could have done with a pen, but I appreciate the apparatus being more secure than the previous version.

So in all, a successful election day locally, from my point of view.

* In a larger sense I am also pleased with the results generally. I’m especially pleased with the result of the governor’s race in Kentucky, because Matt Bevin, the outgoing governor, is a real shitheel of a politician and I doubt he will be missed all that much. Despite being a real shitheel, he still managed to lose by less than 6,000 votes — partisan loyalty is a thing, y’all — and of course is now whining about how there were “irregularities” in the voting and how he’s not conceding the race and so on. At least he’s consistent. President Trump came out the day before the election and stumped for Bevin but of course made it all about him, telling Kentuckians re: Bevin not being reelected, that “you can’t let it happen to me!” Well, Bevin wasn’t reelected, and now it’s all about Trump! Well done him.

Virginia’s House and Senate (and governorship) are now all democratic as well (or will be in January), which doesn’t actually surprise me all that much — Virginia’s been turning bluer for a while now — but it should be interesting to see how that affects the state. I saw on Twitter someone noting that Virginia could become the 38th state to pass the ERA Amendment, but I’m not holding my breath on that one. As I understand it for it to be enshrined in our Constitution there would need to be a special dispensation from the House and Senate of the US (due to the lateness of the 38th vote for it), and I don’t see Mitch McConnell letting that one get by on his watch. Because he’s an awful person, you see.

* This was an off-off election cycle, so I wouldn’t read too much into it, but what I do think is important to see is that conventional wisdom out of Washington doesn’t seem to have that much connection to reality. There was some muttering/hand-wringing that the current impeachment proceedings would have an effect on voting, but… probably it didn’t? As far as I can see, most of the voting seems to be turning on local issues and concerns. Yes, Trump swooped in to Kentucky at the last minute, but when Bevin finally accepts the fact he’s lost, it’ll because of his own policies and karma, and not really about what’s going in Washington.

It’s for that reason I wouldn’t draw too many conclusions yet about what this means for this time next year. Next year, it will be about Washington. And what a time that will be.